Zozobra, or “Old Man Grouch” as he was initially named, first burned in 1924, long before the first Burning Man Festival in 1986. He actually served as inspiration for the Burning Man creators, after they experienced a Zozobra Festival in the early 1980s. Old Man Grouch was later named Zozobra, which means “the gloomy one” in Spanish, and now also goes by the name, “Old Man Gloom.” 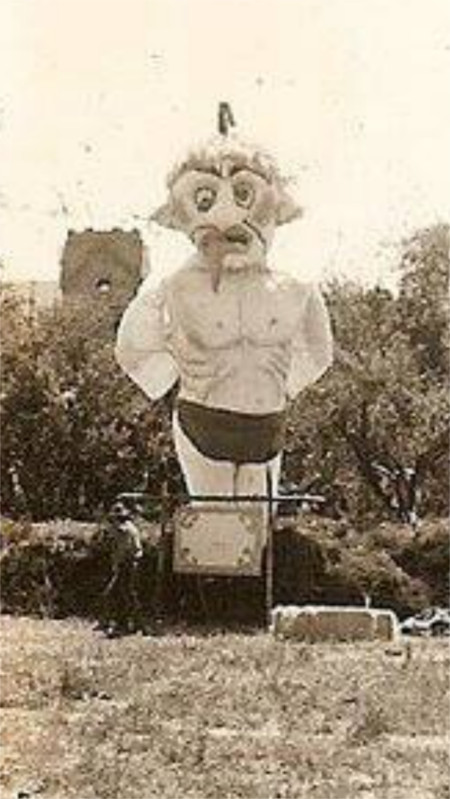 In 1924, he was a six-foot-tall effigy, burned for a private party of artists and writers in Santa Fe. Over the past 92 years, his face and wardrobe have gone through a few changes, but he’s become an iconic figure. He’s also grown to fifty feet tall and weighs approximately 4,000 pounds, making him one of the world’s largest functioning marionettes. Waving arms, rotating eleven-foot-tall head, and enormous, ugly mouth all move to his audible groans of frustration, impatience, and later agony, as the night progresses. 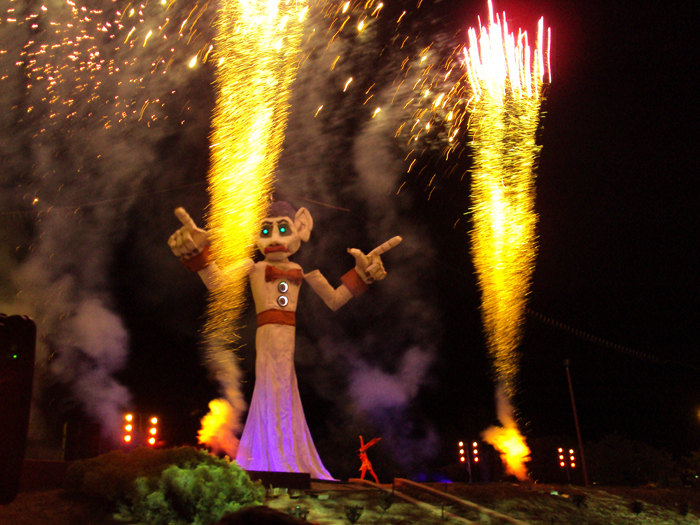 Zozobra represents all things that rain doom and gloom upon us. He was created as a despicable personality, a “sheep-stealer,” an egotistical, grouchy old geezer – arrogant and evil, whose only aim is to bring misery to the townspeople of Santa Fe. Every year, he thrives on our own sad and gloomy thoughts and feelings as they build throughout the year, then we take delight in burning them along with Zozobra on the Friday of Labor Day weekend at Fort Marcy Park, just a few blocks from the plaza. 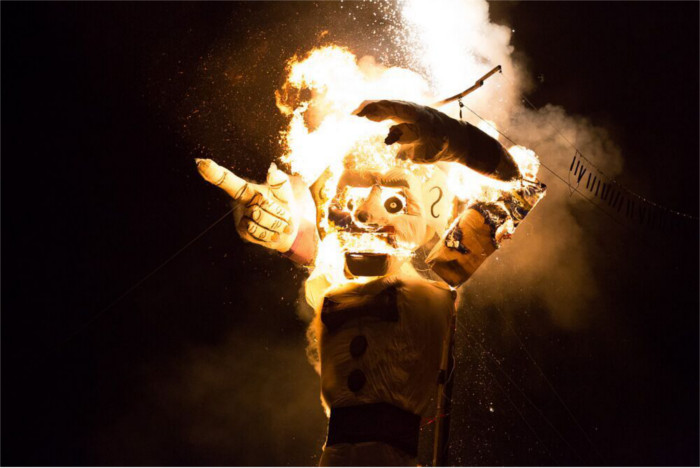 Zozobra – just as his head explodes.

He dies a slow, loud, agonizing death, amid a sea of thundering, effervescent fireworks and explosions, music and cheers of “Burn Him! Burn Him!” from the jeering crowd of thousands – certainly a sight to behold, and one the original creator would have loved.

In 1923, artist Will Shuster was the man behind the first flames and fiery cheer – with the help of friends, such as renowned artist Gustave Baumann, and the artist community known as Los Cinco Pintores (The Five Painters), which included Fremont Ellis, Willard Nash, Józef Bakós, Walter Mruk and Will Shuster. 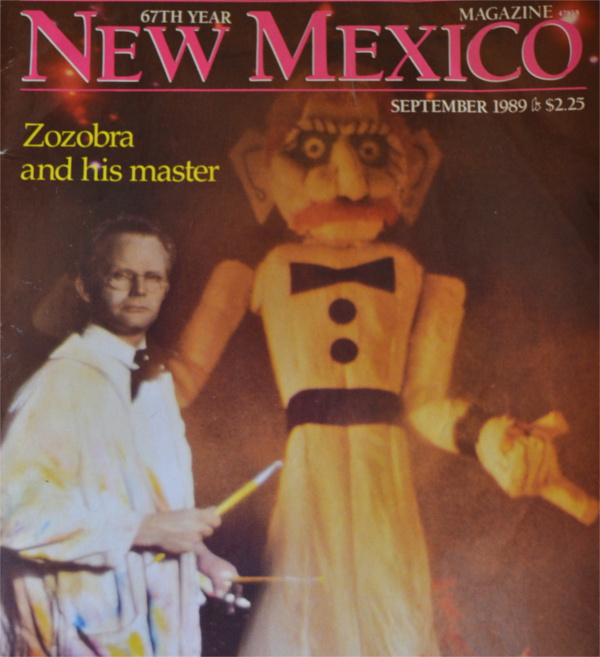 William Howard Shuster II moved to Santa Fe from Philadelphia in 1920. He was 25 years old. He had fought in France during WWI and suffered from the mustard gas he’d been exposed to in the trenches. His doctor diagnosed him with tuberculosis and prescribed that Shuster move to the mountains of the Southwest as soon as possible, saying that maybe the clean air and lots of rest would extend his life by a few years.

After moving to Santa Fe and enduring the boredom of the prescribed “rest cure” for a few months, Shuster began taking walks around the area. He met well-known New York artist John Sloan, and began painting under Sloan’s mentorship. Before long, Shuster was staying out all day and taking his easel and paints with him on strenuous hikes around town and into the nearby mountains. He became a familiar face around town. In social circles, he was known as a colorful, vivacious, honest, outspoken character, with an “every-man-is-a-friend” philosophy.

According to Shuster’s personal journals, part of the original Zozobra inspiration began as a means to cheer up his friends while at La Fonda’s bar on Christmas Eve in 1923. Shuster, or “Shus,” saw how gloomy his friends were. They were the quintessential starving artists, and they felt little hope for the coming year’s prospects. Shus wanted to cheer them up, so he got everyone to write their dark thoughts and feelings on a paper napkin. He then proceeded to burn it in an ashtray. Needless to say, they were kicked out of the bar. 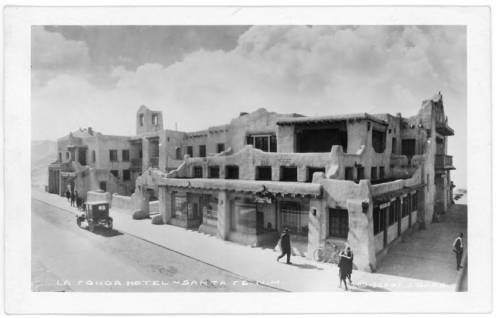 Another key element to the genesis of Zozobra came from a trip Shus took to Mexico where he saw a papier-mache puppet representing Judas, filled with firecrackers, and paraded through town for the Catholic Easter tradition.

Shuster decided he wanted to create an event that offered two things: to burn all the demons that haunt our thoughts and moods, and make it a popular spectacle that everyone can enjoy. The first Zozobra burned to a crisp at the end of August in 1924, at a private barbeque party for fellow artists and writers.

Over the years, Shus continued to work on the puppet, developing Zozobra’s image and character. Below is a sketch and notes from his journal of the head. These original sketches and instructions are still used today in the puppet’s creation. 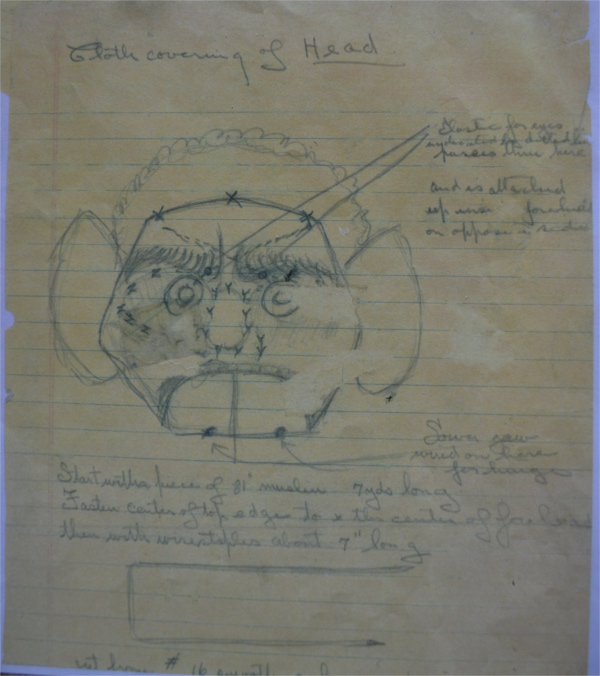 Sketch of Zozobra’s Head and instructions by Will Shuster, from Shuster’s Journal, courtesy of Ray Sandoval. 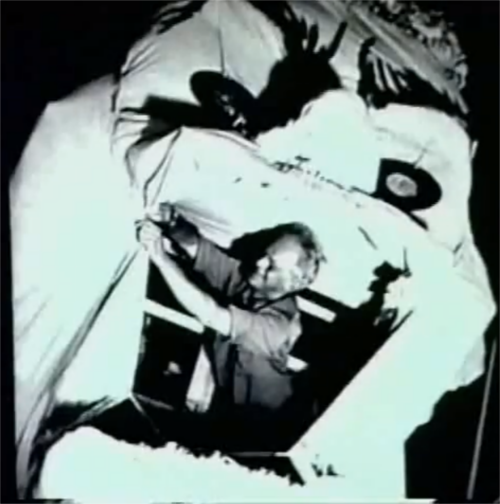 Will Shuster in the mouth of his monster.

In 1925, Shus approached The Santa Fe Fiesta Council. He thought it would be fun to open the Fiesta’s celebrations with Zozobra.  But his idea was not well received by the Fiesta Council at first. The Fiestas de Santa Fe’s proud religious and historical weekend of events have been an important part of Santa Fe’s Spanish culture since 1692.

This initial rejection inspired Shus and friends to come up with a series of “counter Fiesta” events that took place the same weekend. They called it “El Pasatiempo”. The light-hearted shenanigans included the now much-loved Pet Parade, the Desfile de Los Niños, and the Hysterical Historical Parade, also known as the Desfile de los Gentes.

The parades and burning ritual were so popular that the Fiesta Council acquiesced, and in 1927, Zozobra and Pasatiempo began the weekend’s celebrations. 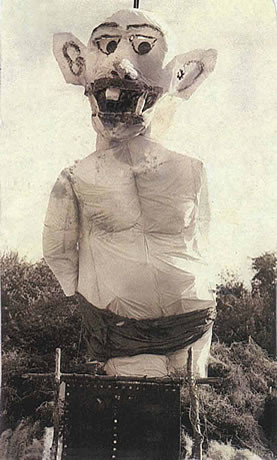 To this day, the Pasatiempo events remain part of Fiesta weekend, which is held the second weekend in September. Because of the extensive popularity of both celebrations, the Zozobra burning is now held the Friday of Labor Day Weekend, kicking off the week of events leading up to Fiestas. 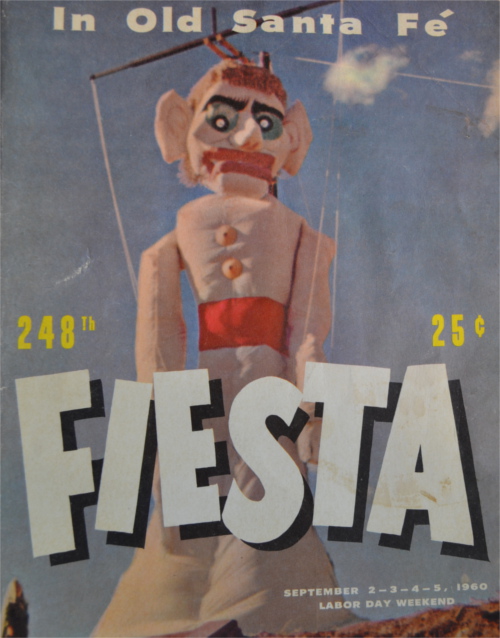 248th edition of the Fiesta Council’s publication “Fiesta” from 1960, features Zozobra on the cover.

In 1964, after his first heart attack, Shuster entrusted the copyrights and all the secrets of Zozobra to the Kiwanis Club of Santa Fe, with the understanding that they would continue the tradition into perpetuity. He was sad to let go of his role with the puppet, but he continued to help with its creation until the year he died of his second heart attack in the spring of 1969. He was 75 years old. 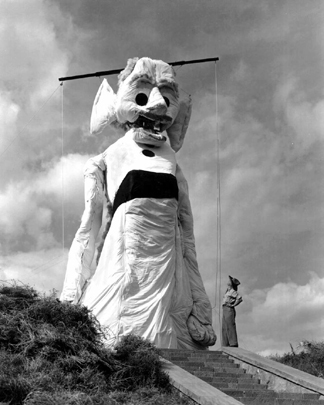 It is with great pride and diligence that the Kiwanis Club of Santa Fe works to continue the now time-honored tradition of Zozobra. Kiwanis Club members and many volunteers work hard to bring Zozobra back to life each year.  Santa Fean, Ray Sandoval has been a part of the production team for over 20 years.  Ray’s enthusiasm and dedication to the event’s success seems to carry the spirit of Shus with him every year.

Ray experienced his first Zozobra at the age of four and was transfixed by the monumental puppet. He loved the whole event so much he hasn’t missed a burning since 1978. At the age of 12, he began his “apprenticeship” helping Harold Gans (also known as the Voice of Zozobra for many years) build the head of the massive marionette. “I was the tool go-fer,” Ray says. “I helped fill the head with stuffing, and I’d run and grab the tools Harold needed. He was very territorial about his role as the builder of the head. I was seventeen before he let me build my first head alone – with his guidance, of course.” 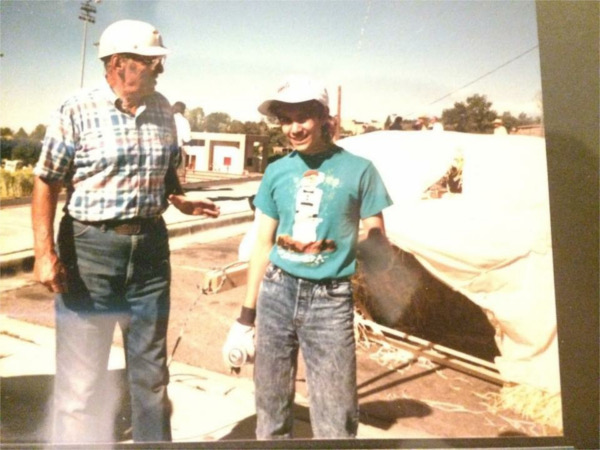 Ray in his teens working with Harold Gans on the puppet head.

When the time came to pass the torch, so to speak, Ray had proven his dedication throughout his teens and was Harold’s first choice. Now in his early forties, Ray still works on building Old Man Gloom’s head. Even during his law school years in Seattle, he would always travel back in enough time to help with the puppet’s creation.  “I love that Zozobra is upholding an amazing tradition and giving to the future at the same time.” 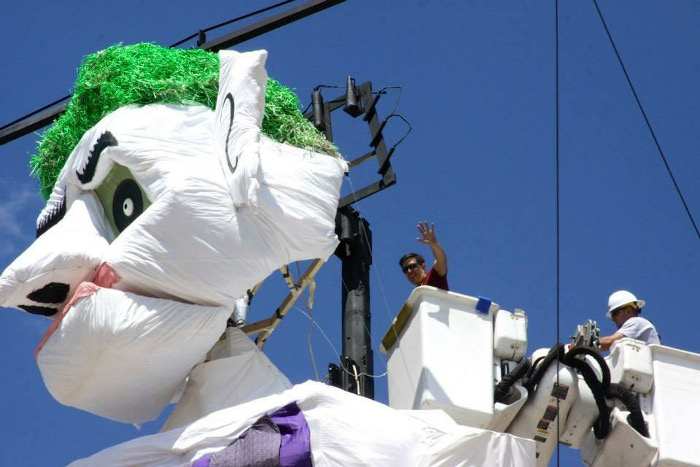 2014 – Ray taking a crane to work on the final touches and ensure the head is in place.

From doom and gloom, goodness is born. The net proceeds from Zozobra’s ticket sales benefit numerous non-profit children’s health, education and recreation programs, both locally and internationally. By the year 2020, UNICEF projects that over 6,000 children’s lives will have been saved by the tetanus vaccines Zozobra has funded each year, since 2012.

Zozobra is 93 in 2017, and the older he gets, the more he gains widespread fame and popularity. He’s the “nasty ol’ guy” you can’t help but love, and love to watch burn. He has gone from being a mostly local affair to being a spectacle that attracts tens of thousands of spectators from all over the U.S and from around the globe each year.

The annual celebration is held the Friday of Labor Day weekend. The weather is often ideal at that time of year, but be prepared for the elements, because whatever the weather, Zozobra will burn! Click here for all ticket and event details and tips on “How to be an Expert Gloom Buster”.

Come and join Santa Fe – cast off all your doom and gloom and celebrate the beginning of fall! 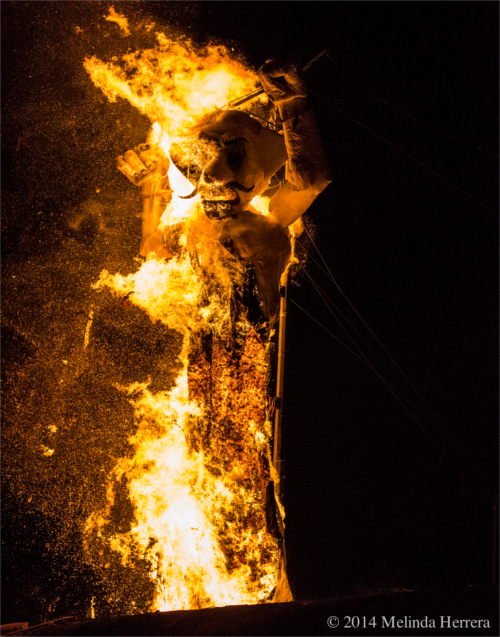 It’s recommended that you plan ahead to book lodging well in advance of the Labor Day Weekend. Here are some great discounts on lodging through SantaFeSelection.com Travel Guide & Concierge.

And don’t just “burn and run,” you can spend at least three or four nights here and take in the sights. Enjoy the entire weekend – stay for the Fiestas Fine Arts & Crafts Market held the Saturday through Tuesday, on the Plaza, and many other fun events held during the following week of Viva La Fiesta! Explore more of the area’s historical and cultural attractions, culinary indulgences, world-class arts and leisure, and outdoor activities. See this link for ideas on things to do in Santa Fe.

Thank you for reading my blog. If you’d like to receive our monthly articles on the people, history, culture of Santa Fe and Northern New Mexico, Click Here to sign up. Thank you!

Excerpts from Will Shuster’s Journals – Courtesy of Ray Sandoval.