The Shed and La Choza are two beloved restaurants in the heart of Santa Fe. They have become as much a part of authentic Santa Fe history as the buildings they occupy.  It’s hard to believe that each was once considered to be “at the edge of town.” From burro shelter, to a governor’s home, to a ranch house, the path of the Carswell family legacy has certainly been unique. 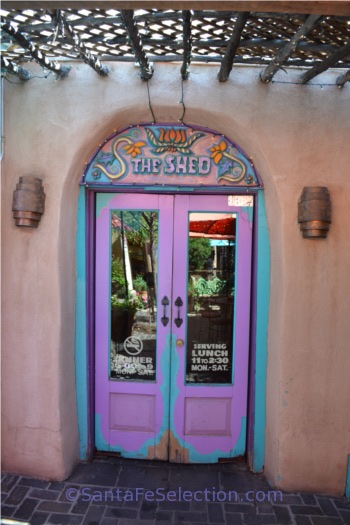 Thornton and Polly Carswell were originally from Springfield, Illinois. They were part of the migration west after the Great Depression, and first settled in Carmel, on the California coast. Polly was a weaver and artist and Thornton was a professional printer with a local newspaper press. Always in search of unique cultural experiences, they came to Santa Fe in 1949 on vacation.  They camped in Black Canyon in the Santa Fe National Forest, on the way up to the ski basin, where they met the park’s caretaker Dave Steele.

Dave was preparing to leave the position, and offered it to Thornton. Having already fallen for Santa Fe, Thornton and Polly took the job.

They moved into the Girl Scout Lodge, now known as the Evergreen Lodge, on Hyde Park Road. Polly was an excellent cook, and before long she was serving up homemade soups and sandwiches to local skiers and hikers. The popularity of the Carswell’s food soon attracted the attention of the ski basin owners, who invited them to run their ski lodge restaurant during the season.

The young family moved into town, to Rodriguez Street, a small neighborhood just off East Palace Avenue, then known as Banana Hill (If anyone knows why it was called Banana Hill, please leave a comment below). They ran the ski lodge restaurant during the winter season, and during the off-season, took camping trips with their two boys, Courtney and Rodney.

Being the free-spirited entrepreneurs they were, after about two years at the ski lodge, the Carswells were ready to start a restaurant of their own. They wanted to share the authentic, local home-cooked food and hospitality they experienced with their friends in their own neighborhood.

They found a spot on Burro Alley situated between West San Francisco Street and West Palace Avenue, in the shadow of the Lensic Theater. Back at the turn of the century, this had been known as a ‘seedy’ part of town. In the book, Turn Left at the Sleeping Dog, by John Pen La Farge, I came upon a tidbit about the “lower San Francisco Street” area as it was at the turn of the 20th century.  Amalia Sena Sanchez was a very young girl in the early 1900s. Her family owned and lived in Sena Plaza along East Palace Avenue on the other side of the main Plaza, in the late 1800s early 1900s. 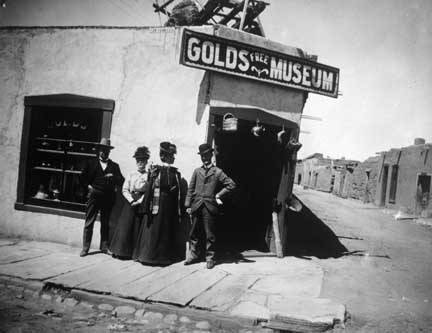 Amalia described the part of town just past Burro Alley, “Lower San Francisco Street, they told us that was the red light district…The men used to go there. Shoot, nobody decent ever went down there… Nobody poor would go there. All these high-toned men used to go—and, during the legislature, the legislators.” 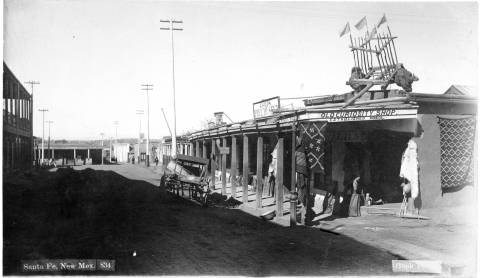 During the mid-1800s, the buildings along the Palace Avenue side of Burro Alley were home to an infamous gambling house owned by one of the most renowned and controversial female figures in Santa Fe history, Doña Maria Gertrudis Barcelo, also known as Doña Tules, the Gambling Queen.

Amalia tells of the wood vendors who used burros to carry their bundles to sell on the plaza. “Then there were the Native guys from Tesuque. Seventy-five cents a load. And, you know, it seemed like an awful lot, but it really wasn’t, ‘cause of all the work. Just think, they had to come all that way.” The journey was likely between seven and ten miles one way. 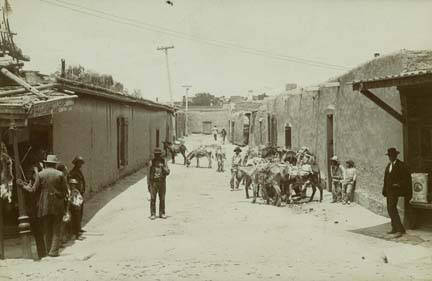 At the end of the day, they’d tie their burros to a post under a low-slung shelter, in a courtyard behind the gambling house and corner shop, and spend some of their earnings in a nearby cantina before starting the long walk home. It is said they used colorful blankets thrown over the burros’ backs, so they could recognize which was whose – after a few tequilas. 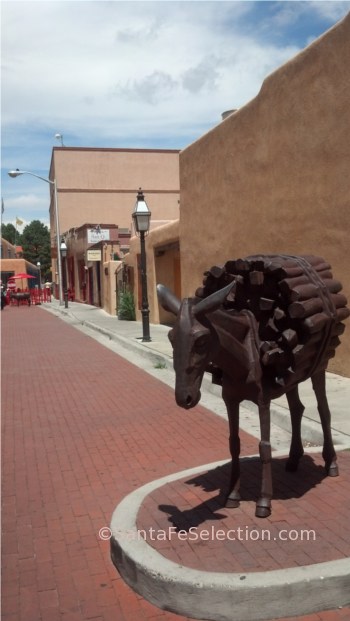 By the 1950s, cars and trucks had replaced most of the burros. Who knew that a stable for burro parking at the edge of town would one day become a James Beard Award winning restaurant? 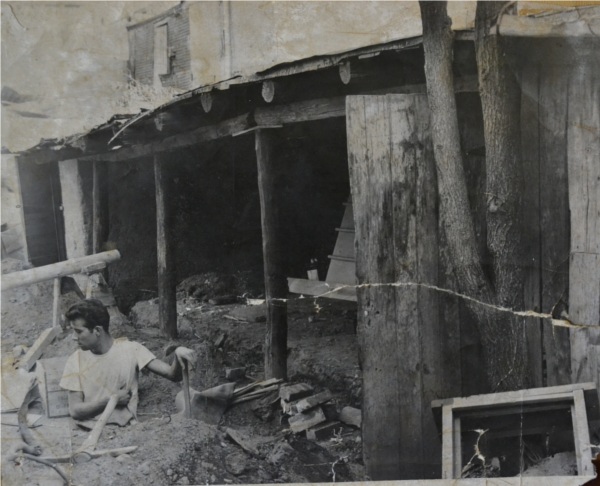 Manuel Carillo-Connie’s brother working on the renovation from shelter to The Shed – 1952. Carswell Family archive.

On July 4th, 1953, after a lot of hard work, and help from their good friends and neighbors Connie Carillo and her brother Manuel, the Carswells gained their independence as restaurateurs and opened The Shed, seating twenty-two, at number 27 Burro Alley. Neighborhood friend Connie, an excellent cook, joined them in the kitchen. 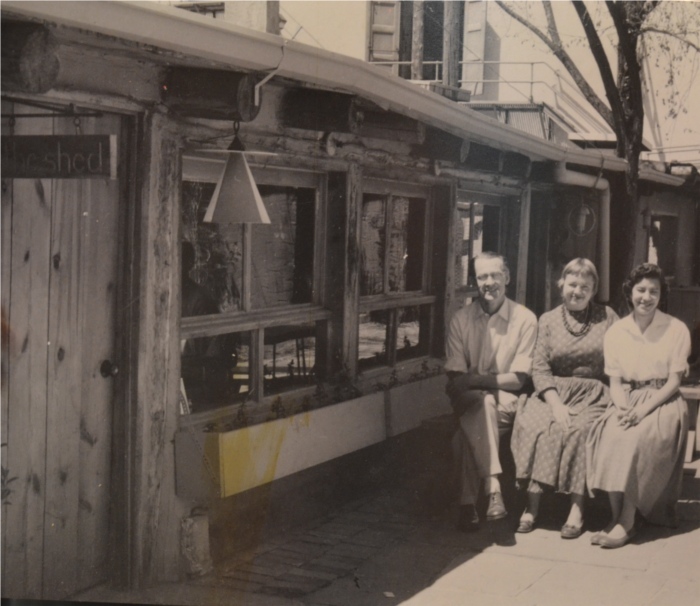 Thornton, Polly and Connie outside The Shed. 1953. Image from the Carswell family archive.

For six years, The Shed flourished. Polly, Thornton and Connie ran the kitchen, prepping and cooking up the heart-warming food from fresh ingredients daily. 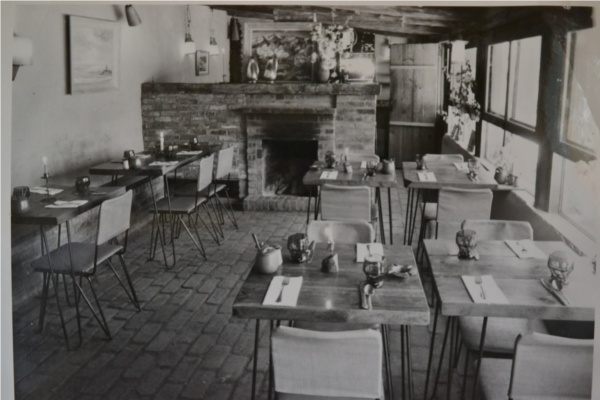 “Recipes came from the way local people cooked in their homes in the neighborhood. So good and usually so simple,” Courtney Carswell says.

They served only lunches for many years, making it an ideal workplace for young mothers as wait-staff, finishing up their shifts in time to pick up the kids from school. The waitresses wore uniforms styled in the Spanish theme of Fiestas, with tiered “broomstick” skirts and white embroidered blouses.

In its early days, The Shed only operated during the summer months, leaving the rest of the year for the family to drive and camp through central Mexico and soak up the culture. Courtney remembers, “The locals there would laugh at our Jeep wagon as we drove by with ‘Burro Alley’ written on the side of it.”

In 1960, the alley was bought by a uranium tycoon.  Sadly, the corner buildings that once held Doña Tules’ gambling house were torn down and replaced by a large office building. It was time for The Shed to relocate.

A friend knew about Prince Patio, then owned by the Fields, who were dedicated supporters of preserving the Spanish Colonial history and culture in the area. 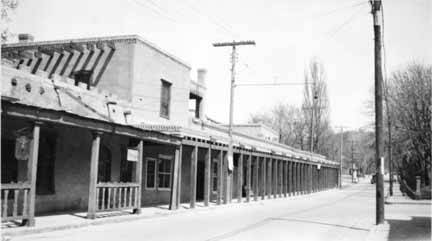 Palace Avenue at Cathedral Place. Sena Plaza at center. Photo by Witter Byner, circa 1900. Palace of the Governors Photo Archives.

Located within the compound that is now known as Sena Plaza (Amalia Sena’s family home during the late 1800s-early 1900s), Prince Patio is a red brick courtyard surrounded by 18 rooms. The Shed occupies the rooms in the north portion of the building. 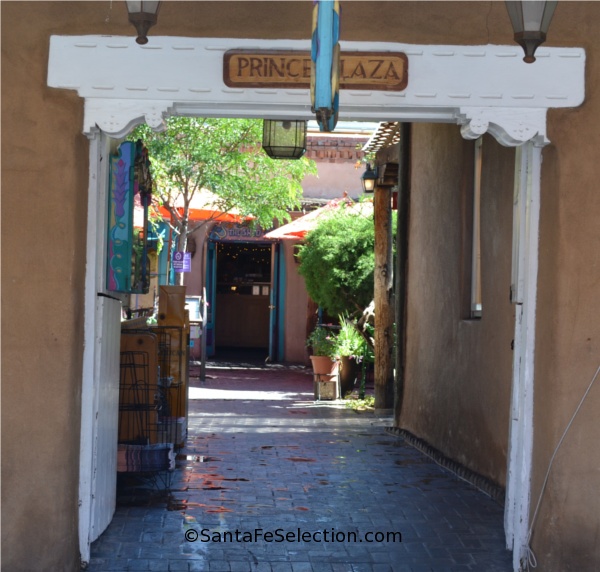 Prince Plaza and the welcoming door of The Shed at the far end of the courtyard.

“It was way on the other side of the Plaza,” as Courtney tells it. “It was considered kind of out of the way. You have to understand that in those days all the action was right on the Plaza. Anything outside of that felt like the edge of town.” Literally half a block from the Plaza, Prince Patio became the ideal new home for The Shed, which now had room to grow from twenty-two seats to over a hundred and twenty. 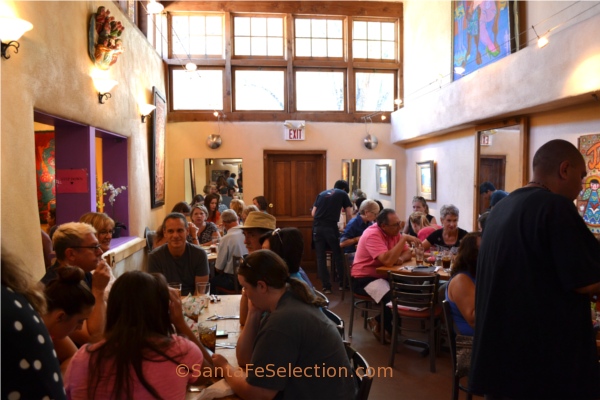 One of the many dining rooms of The Shed.

This entire block of Spanish Colonial buildings has a rich and important history. The plaque embedded in the wall, just two doors down from Prince Patio, says  A building stood here before 1680. It was wrecked in the great Indian uprising. This house incorporates what remains. 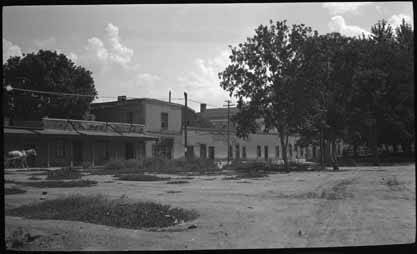 The King of Spain awarded General de Vargas the land with a hacienda, as reward for his “peaceful reconquest” of Santa Fe in 1692.  In 1697, by Spanish royal decree, a large portion of the property was awarded to Captain Diego Arias de Quiros, also in recognition of his participation in the reconquest. From 1889 until 1893, it was the home of L. Bradford Prince during his term as territorial Governor. In 1942, the property was purchased by the Field Estate and used for the U.S. Army as an enlisted mens’ club and dance hall during WWII. 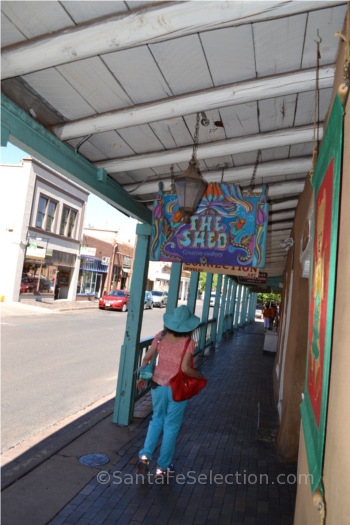 The Shed fit right in to its new, historic home. In the early Seventies, they extended their hours to serve dinner as well as lunch. Their extremely popular fare that blends influences of Pueblo, Spanish and Mexican dishes is famous for its red and green chile, both of which have won local popular vote awards for decades. 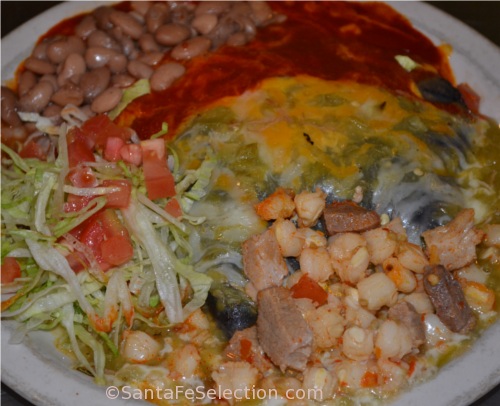 Courtney worked at the restaurant while in junior high. He came on board in a managerial capacity at the end of the 1960s, after college. “I didn’t expect to return to Santa Fe and work in the family restaurant, but it worked out to be the best route for us at the time.” Courtney’s wife Linnea also joined the family business and remains active in its running. In the mid-1990s eldest son Josh joined Courtney and Linnea, gradually overseeing food production and operations. A few years later daughter Sarah joined the efforts with emphasis on the human resources side of the business.

During the early Eighties, as more businesses were moving into the Prince Patio and surrounding areas, and rents were being driven higher, the family felt they might need to move again to ensure a foothold for the restaurant.

Once again, whether it was by luck, friends, or fluke, they found another property at… yes, “the edge of town,” alongside the railroad tracks on Alarid Street.  By this time “the edge of town” had moved just over a mile away. The area had been grazing land up until the mid-1900s.

The building had been the headquarters of the Mercer Ranch during the early 1900s. The Carswells opened their second restaurant in 1983, and called it La Choza (Spanish meaning the shed or hut). The rooms it occupies were once the bunkhouse for the Mercer ranch hands. 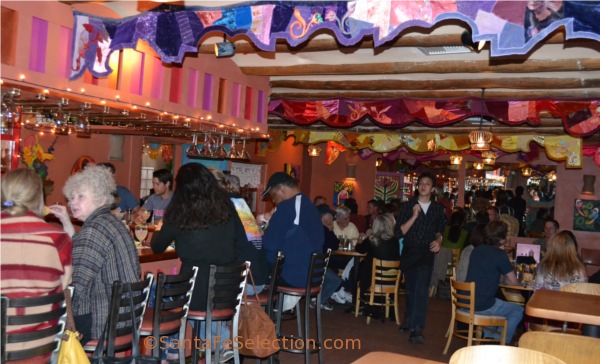 In the 1980s, their neighbors consisted of an old residential barrio, some industrial offices and storage buildings, and the train depot nearby. Now, the same block is northeast of one of the busiest intersections in downtown Santa Fe, and every day the Railrunner commuter train slowly rumbles by the patio. 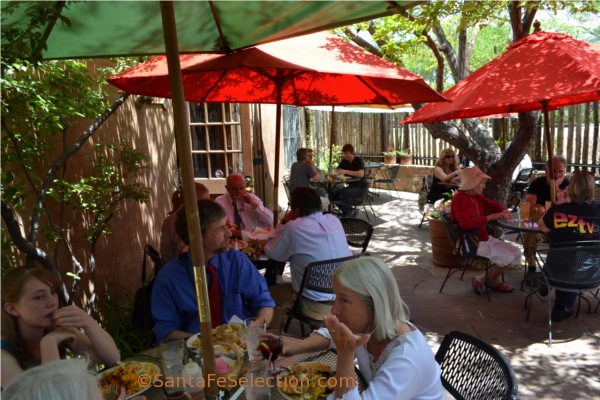 In 2007,  Sarah Carswell was able to take over its management. “She really brought the family ethic and feel to the place. It was in need of her attention,” Courtney said.  La Choza has also earned its own regular spot in the limelight of chile contests and popular favorite awards over the years.

Recently, The Shed’s Prince Patio location underwent property management changes, and the future of The Shed was alarmingly in jeopardy. With more hard work and negotiation, the Carswells were able to hold on to the lease. Perhaps the owners realized there’d likely be a riot on their hands!  Together, the historic buildings and the Carswell family legacy are synonymous with authentic Santa Fe culture that is appreciated by hundreds of customers every day, year-round. 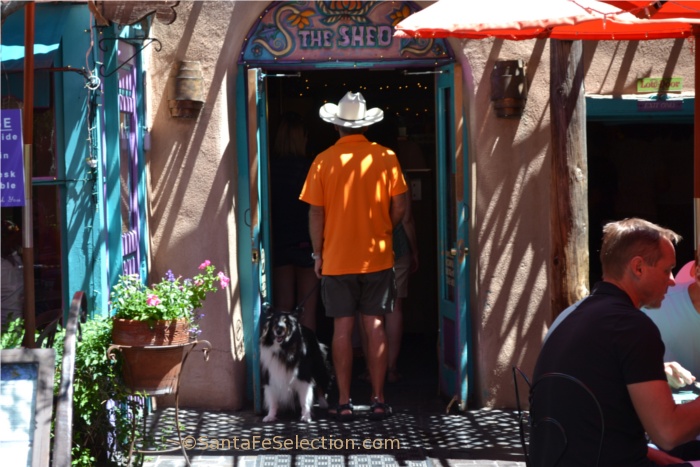 Courtney has loved the life he didn’t expect to lead running his family’s restaurants. “It’s very hard work, and unpredictable. It’s kind of like an opera. You’ve got to make it work because you can’t afford not to open. But it’s all worth it, especially when you hear from your patrons how much they appreciate it. When they say ‘Thank you for doing what you do,’ it makes it all worthwhile.”

Now in his seventies, Courtney is ready to pass the running of the restaurants on to his family, Linnea, and their children, Josh, Sarah and Kenji, and their loyal staff, many of whom have been with the family for decades. 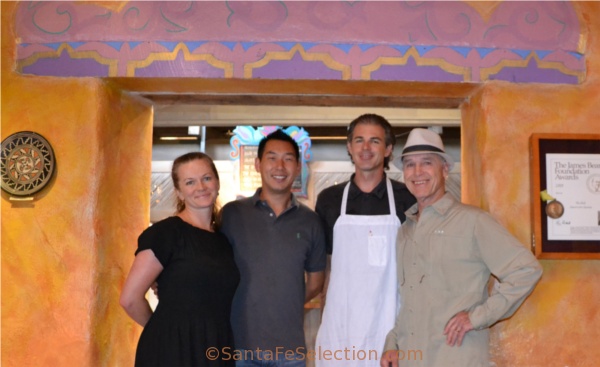 In 2003, The Shed won the acclaimed James Beard Award as an “American Classic of Timeless Appeal.” That came as no surprise. By 2003, they had already kept Santa Feans’ hearts and bellies happy for over 50 years!

For more information on The Shed go to: http://santafeselection.com/restaurants/the-shed

Thank you for reading my blog. Please sign up to receive my monthly articles by entering your email address in the ‘subscribe’ field on the ‘home’ page. Thanks, Maria.