Anyone who has ever been to Santa Fe in the past 110 years knows that a must-visit spot is The Plaza Café. Before then, it was the Star Restaurant. 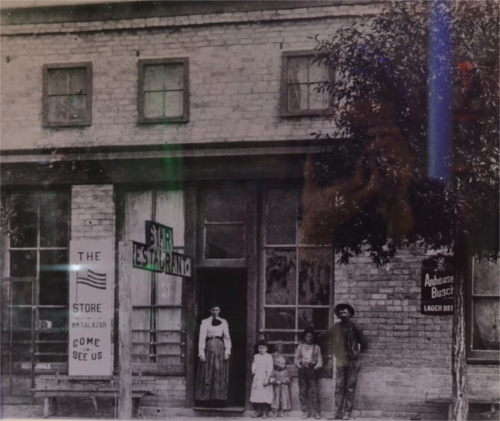 The Star Restaurant, on Lincoln Ave west side of the plaza, where The Plaza Cafe now stands. circa 1800s.

The Ipiotis brothers, originally from Greece, first opened the Plaza Café in 1905. 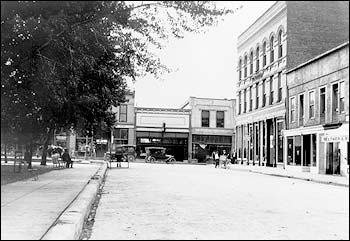 Lincoln Ave, west of the plaza circa 1918. Image courtesy of Razatos Family Archive.

In 1947, a young Greek immigrant named Dan Razatos bought the cafe, and his family has continued the legacy that has successfully kept us feeling welcome, warm, and well-fed to this day! 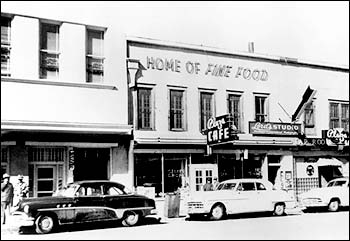 I was curious to find out how Dan Razatos, a young boy from the Greek Isles, traveling alone, ever found his way to Santa Fe in the early 1930s.

Daniel Razatos was born in Kefalonia, the largest of the Ionian islands. It has endured a tumultuous history of economic hardship, WWII enemy occupation, and earthquakes (it’s situated along an active fault line).

In early 1917, when Dan was only 12 years old, for his safety his parents sent him to live with a relative in Alexandria, the largest seaport in Egypt. In his early teens, he worked as a cabin boy on the ships that toured Europe, and he hoped to be on a ship to America one day. He was 19 years old when he finally arrived in New York City. Dan jumped ship and never looked back.

His only connection to the U.S. was an uncle who lived in Denver, and that was where he headed. While living in Denver, he traveled around the Southwest, and lived in California for a time, but when his travels brought him to Santa Fe in the early 1930s, he knew this was his home. 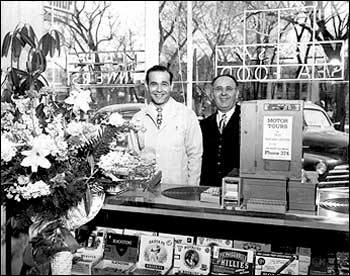 By this time, The Plaza Café had changed hands and was owned by Dan Pomonis, also originally from Greece. The two Dans met, and Dan Razatos worked on the café staff for many years. 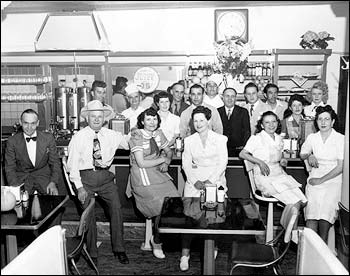 Plaza Cafe Staff in 1947. Dan Razatos and Dan Pomonis are side by side in center. Image: Razatos Family Archive.

He worked hard to save his money, and eventually bought the café in 1947. 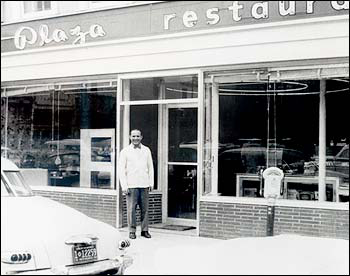 In 1961, Dan fell for a local girl named Beneranda Saiz. They married and raised a family of six children. Beneranda also helped her husband in the café – she still comes to visit every day. 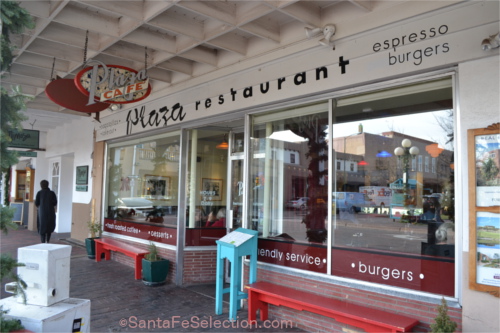 Dan passed away in 1989. During his lifetime, he returned only once to Greece for a brief visit. He had successfully fulfilled his dreams in the country he loved. “Why would I go back there?” he’d say. “This is the best country in the world!”

Now, in 2015, the Midas touch of running a successful restaurant remains in the competent Greek and New Mexican hands of his family. 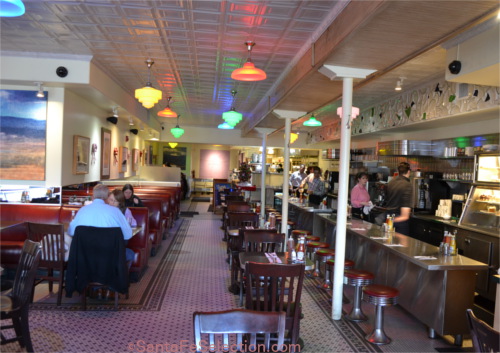 During a rare quiet moment between lunch and dinner time. December 2014.

Some of the great comforts about this restaurant are that they’ve kept the same American diner decor, and remained dedicated to serving a diverse, multi-cultural menu of fresh ingredients for breakfast, lunch and dinner seven days a week, year-round, with the exception of Thanksgiving Day and Christmas Day. 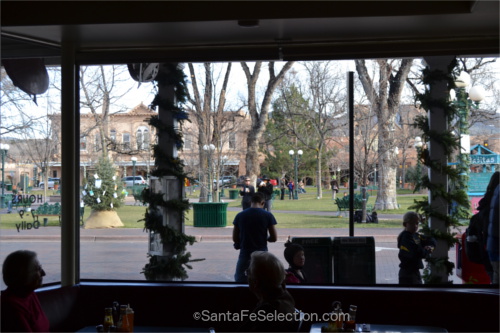 Though little has changed inside the restaurant, through its large windows, The Plaza Café has watched the change of seasons and trends at the heart of town for decades. It’s such a part of the landscape and history here that it wouldn’t feel like Santa Fe without the Plaza Café there to welcome you. 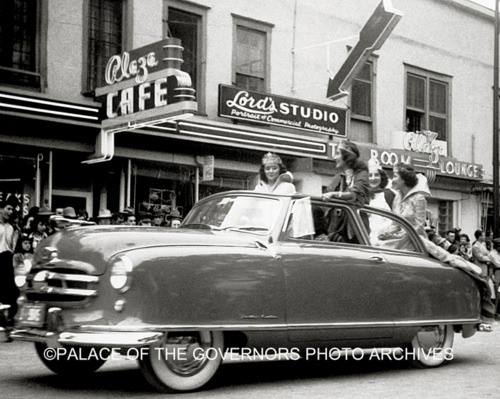 Plaza Cafe as the Fiesta Queen drives by, circa 1957. Courtesy of Palace of the Governors Photo Archives.

Tragedy struck in 2010, when a kitchen fire caused irreparable damage. For almost two years, Dan’s and Beneranda’s sons Andy and Daniel, and a large crew of builders worked tirelessly to restore the café to its original décor. 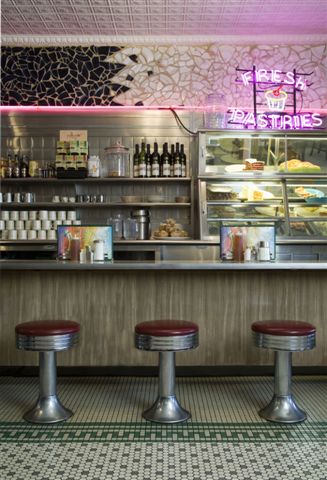 After the restoration, the counter looks almost exactly as it did before the fire.

In June, 2012, at last, the doors opened and we all flooded back as if nothing had ever happened – glad to have our breakfast burritos, tortilla soup, and all the yummy goodness back on our plates. Many of the staff remained loyal during the hiatus, and were happily there to greet us on day one. 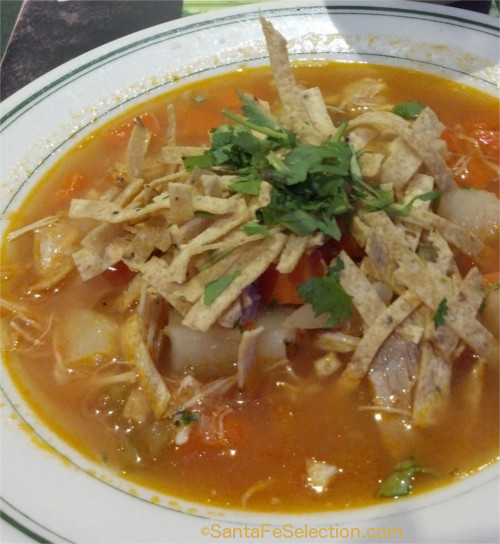 Tortilla Soup. Perfect on a cold winter’s day. I followed that with a tall glass of Mexican Hot Chocolate. Yum!

Manager Daniel Razatos (junior) told me he loves how much like a family it feels. “Seeing the joy people get from eating here,” he says, “It’s like an extended family. I’ve seen so many families grow up here. The children become parents and bring their sons and daughters. It’s a terrific feeling to be connected to generations of people I couldn’t have met otherwise.” 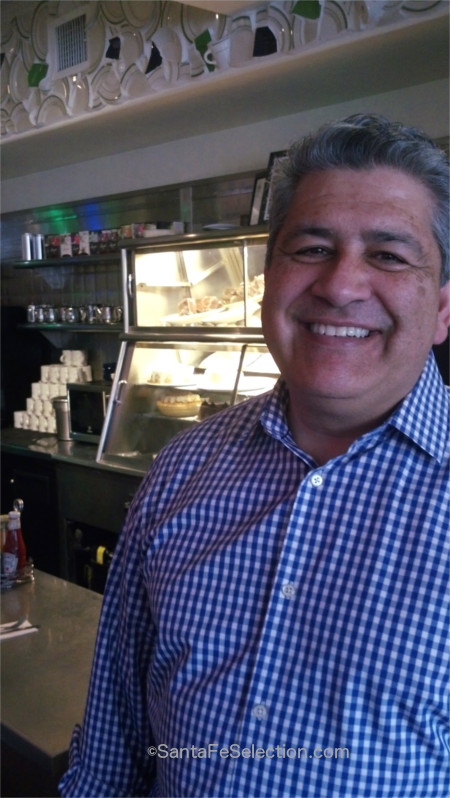 The remarkably low staff turnover at The Plaza Café is a sign of how happy they are to work there. Many have been with them for their entire careers. Dan said, “Some of our staff have been with us for 26 years or more. Esther, the head waitress, has been with us for 27 years! The waitstaff really are the cornerstones of the restaurant. They make everyone feel welcome and a part of the family.”

When that young boy from Greece arrived in Santa Fe back in the early1930s, I wonder if he had any idea he’d be responsible for sustaining a legacy that has not only survived, but flourished on the west side of the plaza for more than a century. With delicious abundant servings, bulbously huge pies and desserts, its retro ambience, great views, and friendly staff, the Plaza Café’s recipe for success has been bubbling for 110 years! Bravo! 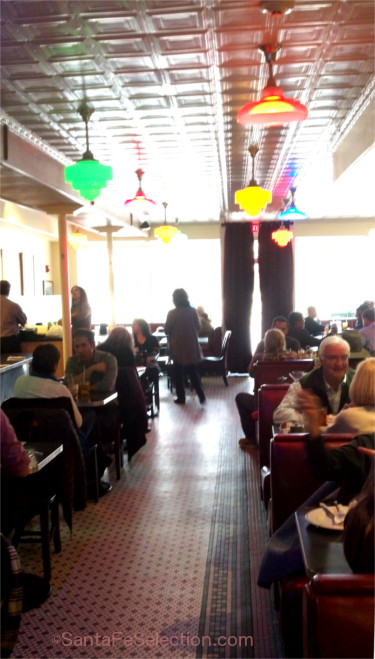 To the Plaza Café family of staff and customers, “Congratulations and Happy 110th Anniversary to you!!… See you tomorrow for brekky!” 🙂 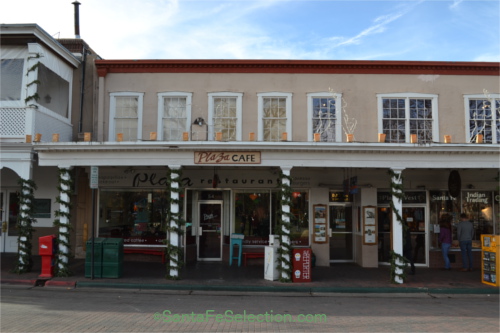 For more information about The Plaza Café go to: http://santafeselection.com/restaurants/the-plaza-restaurant or call: (505)982-1664

Thank you for reading my blog. Please sign up to receive my monthly articles on the history, culture, people and traditions of Santa Fe and northern New Mexico by entering your email address in the ‘subscribe’ field on the ‘home’ page. Cheers! Maria.