San Miguel Chapel is known as the oldest sanctified church in the United States. It is a much-loved, iconic landmark dating back to 1610. The chapel sits on the site of an ancient kiva that was sacred to the original Native American inhabitants, and which dates back to the 1300s.

Franciscan priests directed the construction of the chapel, which was built by indigenous Mexican Tlaxcalans,  who arrived with the Spanish settlers led by Don Juan Oñate around 1598.  It was then known as La Hermita de San Miguel (Shrine of Saint Michael). 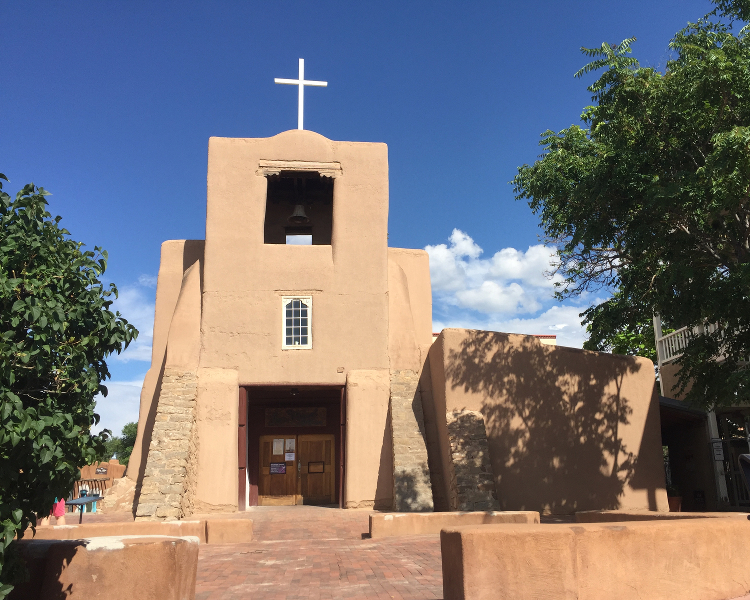 During the course of 500 years, San Miguel Chapel has been through many trials and tribulations. It stands as testament to the history of the district known as the Barrio de Analco. “Barrio” means neighborhood in Spanish, and “Analco” in the native Tlaxcalan language of Nahuatl means “next to the water”.  Barrio de Analco is one of the oldest neighborhoods in Santa Fe. If it weren’t for the love and determination of the local people throughout many centuries, this chapel would not have survived its many challenges.

The chapel is located at 401 Old Santa Fe Trail, at the corner of Old Santa Fe Trail and East De Vargas Street (East De Vargas is part of the original Camino Real). The barrio stretches a few short blocks south, west and east of the chapel.  One of its very popular neighbors is the Oldest House in the United States, whose foundations date back to the 1200s, but was constructed in its current form around 1608. Other younger notable neighbors include the Santa Fe home of Adolph Bandelier built circa 1867, and the State Capital’s Roundhouse, built in 1966.

In the early 1600s, the church sat overlooking the homes and farm land of a small population of laborers, Spanish soldiers, and indigenous Tlaxcalans. By the mid-1600s, it had already been damaged and rebuilt after a local feud between a provincial governor and the church authorities.

In 1680, the chapel sustained severe damage during the Pueblo Revolt. Native American Puebloans succeeded in driving out the Spanish for almost 12 years.  The Spanish resettled the area in1693. At that time Governor General Don Diego de Vargas decreed the chapel be restored. The extensive restorations and modifications were completed in 1710.

In 1848, a massive three-tiered bell tower was constructed which would eventually hold the mysterious 780 pound San Jose Bell in 1856. The mystery surrounding the bell dates back to 1356 and its possible origin in medieval Spain.

In 1859, Bishop Lamy bought the chapel, and the adjacent land where the De La Salle Christian Brothers built a school, then known as St. Michael’s College. 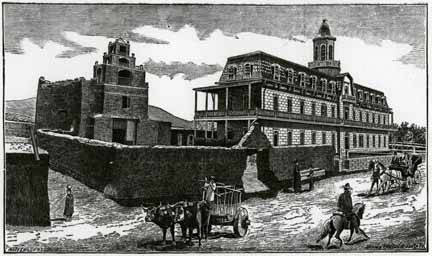 A severe storm hit in 1872 and felled the bell and tower causing extensive damage. 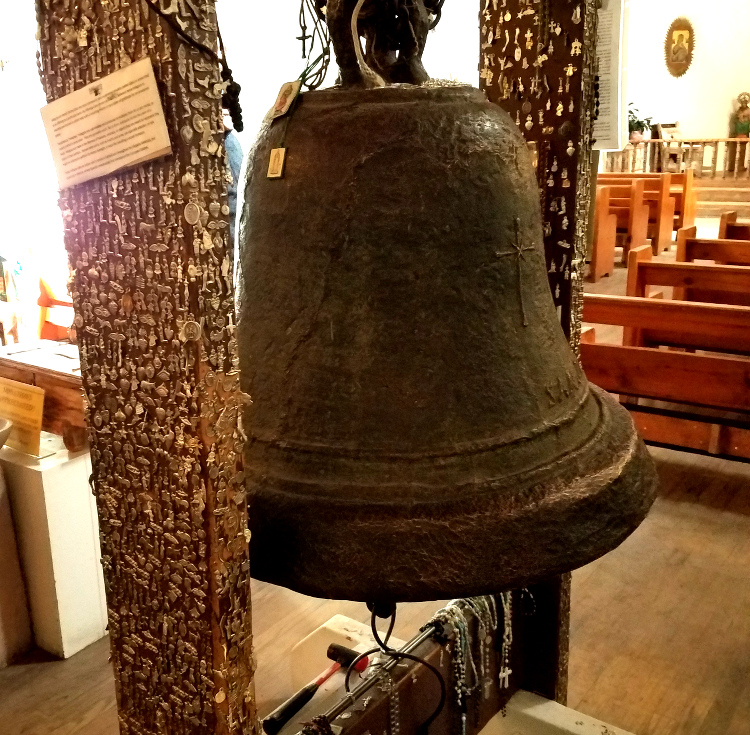 The San Jose Bell now sits inside San Miguel Chapel. It’s stanchion beams are smothered in little silver milagros that visitors have placed there over the years. Photo©SantaFeSelection.com 2020.

By 1887 the Christian Brothers were on the verge of demolishing the chapel. The need for repairs was too great and funds were non-existent. This time the people of the parish came to the chapel’s aid. Many in the community helped build two new buttresses to support the adobe walls. A new roof with a smaller bell tower was built, and new interior and exterior plaster was applied. 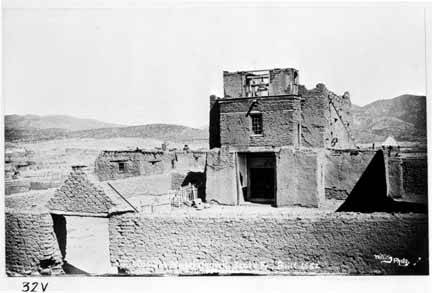 Circa 1880 the chapel is in desperate need of repair after battles and storms. The oldest house sits to the left. Image courtesy of Palace of the Governors photo archive.

In 1955, the chapel again underwent major restorations.  During this period, the original dirt floor and sanctuary steps were unearthed, and human remains and pottery sherds were found buried under the church.

Sadly, many of the modern materials used for repairs, such as concrete, and tar, and modern stucco, took their toll and were more damaging in the long term for the original adobe structure. In 2008, St. Michael’s High School joined forces with the expertise of Cornerstones Community Partnerships to set the preservation of the chapel back on course and restore it to its original beauty with authentic materials.

The Future of San Miguel Chapel

With the help of Cornerstones, the chapel will be encased in scaffolding, and adobe and plastering experts from around the globe will participate in a massive application of authentic adobe plaster to the exterior using historic methods. This will be a spectacular event. If you would like to participate or volunteer, please contact Cornerstones at cstones.org.  It is collaborations like these that will help preserve this treasure, it’s history, and the sense of community it fosters for generations to come.

Chapel Director Emeritus David Blackman says, “San Miguel Chapel is the least known most significant historic treasure in the United States.” Blackman has been a staunch supporter of the chapel since 2004, spearheading fund-raising, and organizing grants and renovation projects to preserve this unique landmark. 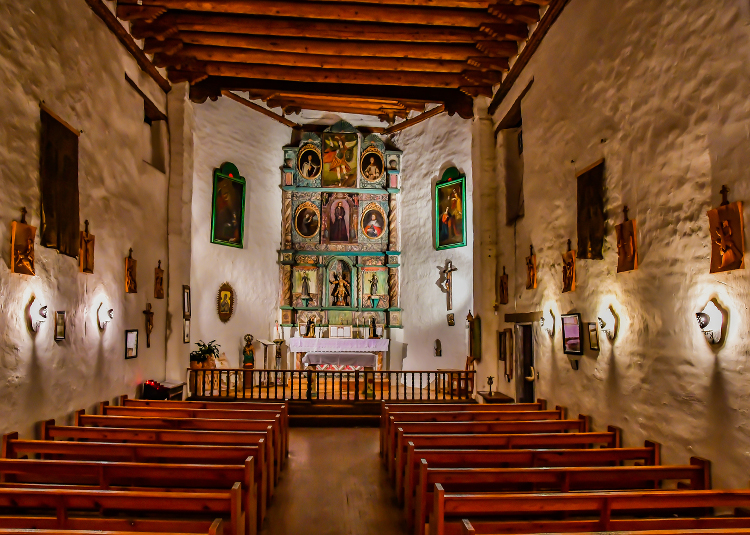 This little chapel holds a dear place in the hearts of locals, and those who visit. It remains as much a part of the community now as it ever did. The oldest sanctified church in the U.S. still hosts mass when available. It is also used as a venue for special ceremonies, such as vow renewals, marriage proposals, memorials, talks, lectures and some private services, as approved by the chapel officials.

Every fall the San Miguel Fall Festival draws crowds from near and far for a variety of events and performances, including Native Aztec ceremonial dances, historical lectures, and demonstrations. 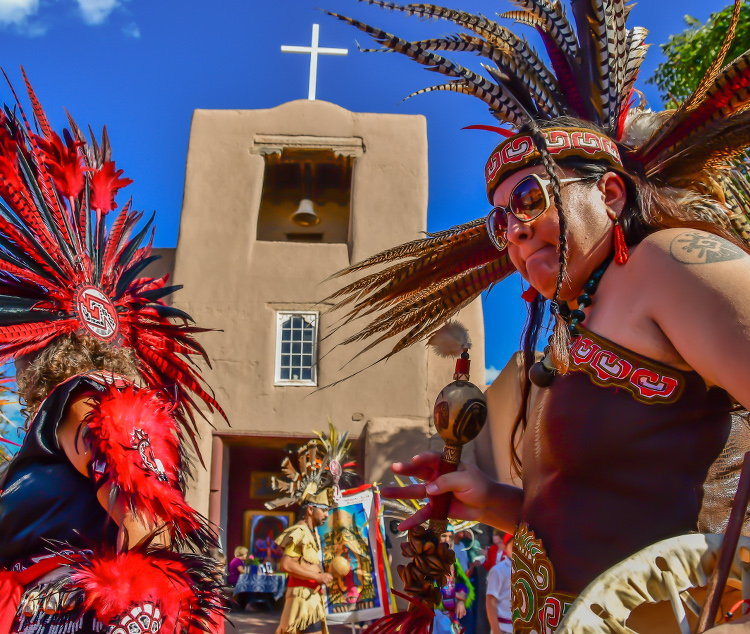 The chapel space and excellent acoustics are also gaining notoriety as “The Sweetest Listening Room in Santa Fe New Mexico”.   Music lovers can experience a unique local music scene throughout the year, and the summer season chamber music series held in July and August. 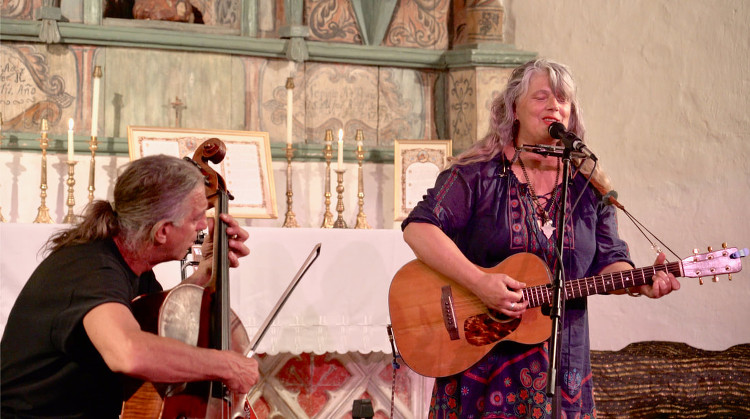 Visitors are welcome to visit the chapel (sometimes it stays open a little later, and on rare occasions it may be closed due to a private event). There is often a docent available to help guide you through the amazing history of the chapel. There will also soon be a gift shop within the chapel. 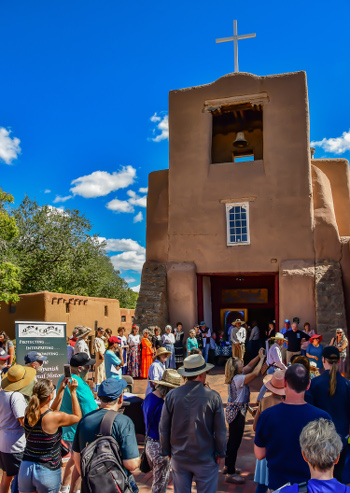 Visitors travel from around the globe to visit this wonderful site. Generous donations of time, expertise, and of course, money, have enabled it to remain a beloved part of the community throughout the centuries. Be sure to set aside time in your itinerary to visit the oldest church and a wonderful historic landmark in this unique neighborhood.

If you’re planning to visit Santa Fe and would like a free Mini Guide Map of the historic points of interest, plus a day trip map, and ideas of things to do, where to eat and play, email me, Maria@santafeselection.com and send me your COMPLETE U.S. mailing address, and I will mail you our Mini Guide Maps piece in advance of your arrival.

For help finding the best lodging with special discounts, please go to SantaFeSelection.com/lodging, where you can book direct and save.

For information on Music Series Events throughout the year visit this link: http://www.sanmiguelconcerts.org/