Allan Houser is known world-wide as one of the most important American artists of the 20th Century, but he experienced a winding road to the status of legendary art icon. Given the dramatic impact of his art and its continued status even 30 years after his death, you might rightly expect that his art was his only means of support for the better part of his life. But he had to take various jobs to pay the way, including construction, handyman work and his favorite, teaching. In truth, it wasn’t until much later in his life that he felt ready to “retire” and concentrate solely on his art. 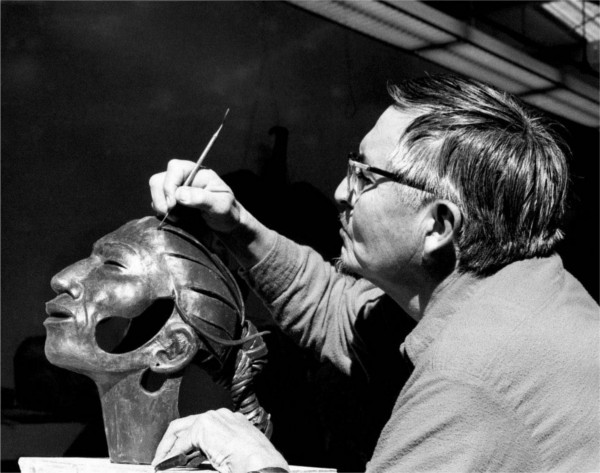 I recently had the pleasure of interviewing David Rettig, a family friend and curator of collections for the Allan Houser Estate. He knew Allan Houser for the last 20 years of his life, and has worked for the family since shortly after Allan’s death in 1994. 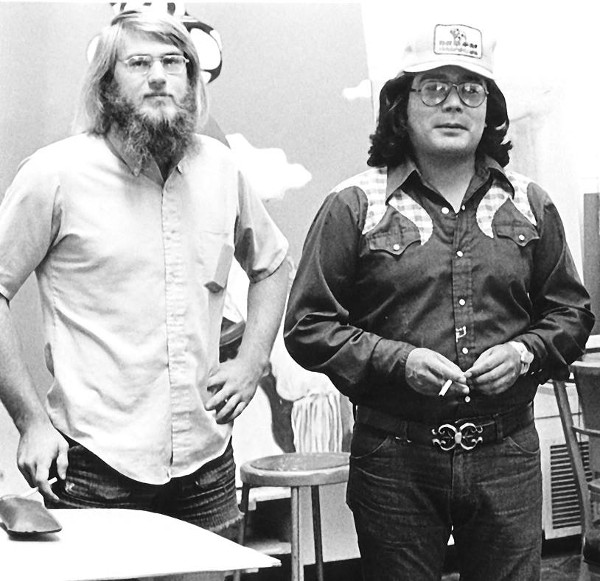 I took the opportunity to learn more about Allan Houser the person, and gain access to photographs from the family’s personal archive that show a little backstory behind the making of this legendary artist.

Allan’s parents, Sam and Blossom Haozous, were of the Chiricahua Apache tribe — a hunter-gatherer tribe that moved between northern Mexico and New Mexico. 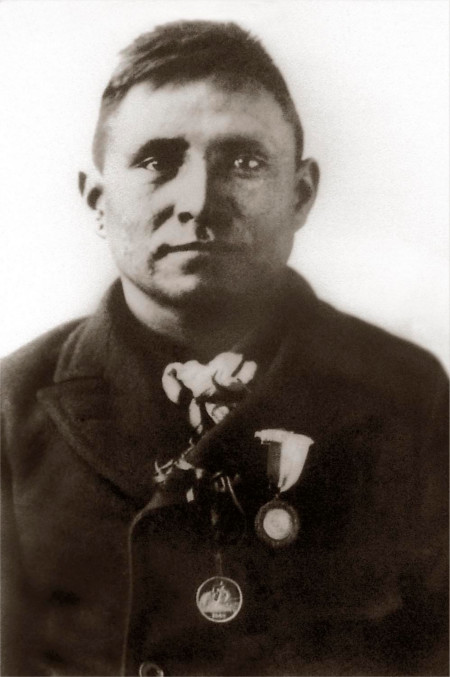 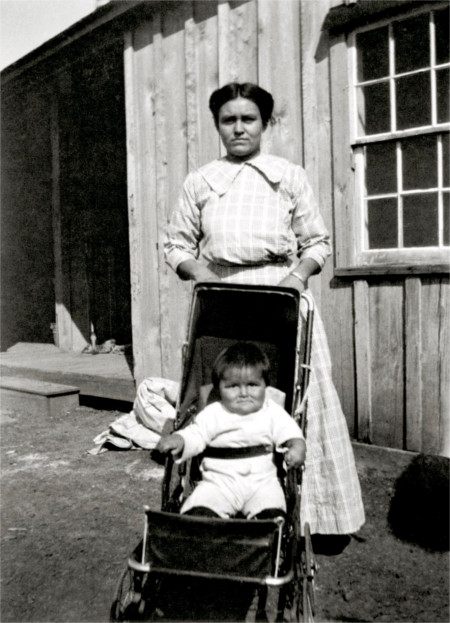 Sam Haozous’ father was first cousin to Apache leader Geronimo, and a member of the band of Chiricahua known as Warm Springs Apaches. (Warm Springs was a location they frequented, about 60 miles north of Truth or Consequences, then known as Hot Springs, New Mexico.) In 1886, after heavy fighting, and two years in exile, Geronimo surrendered to the U.S. Army in northern Mexico. As punishment and retribution, Geronimo and those related and sympathetic to him were imprisoned and transported by train, often in cattle cars, to various prisons in Florida, Alabama, and finally Oklahoma. 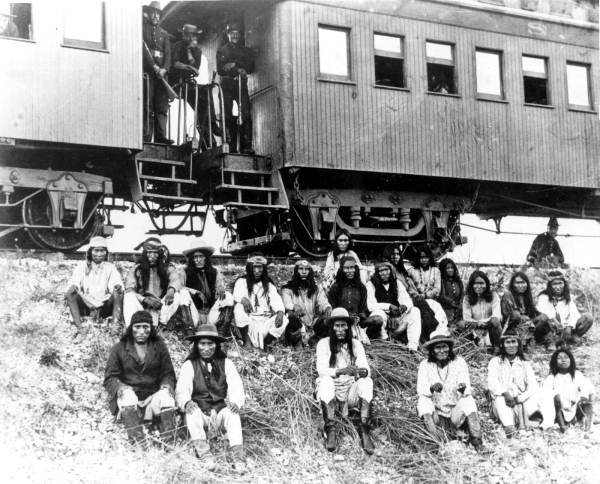 Geronimo [front row-3rd from right] and Warm Springs tribe members on the way to Florida by train. 1886. Image: Floridamemory.com

Eventually, in 1894, approximately 250 Chiricahua were confined at Fort Sill in Oklahoma, where they were held for 20 more years.

This population of Chiricahua Apaches, who had become known as the “Ft. Sill Apaches” were finally released in late 1913 and early 1914. They were given the option to return to New Mexico, where they could choose to join the Mescalero Apache on their reservation, or to stay in Oklahoma and receive land parcels to farm. Sam and Blossom were among the 14 families who chose to stay and create farms, raising livestock, alfalfa, cotton and vegetables.

Allan C. Haozous was born on June 30th, 1914.  While in captivity, it became a custom among the Chiricahua to use the last name of the commanding officer as the middle initial for children. Even though Allan was the first to be born out of captivity, his parents maintained the tradition. The “C” in Allan’s name represents Capron, the name of the commanding officer at Fort Sill.

Through his childhood, Allan attended school and worked on the farm. He was diligent and had a strong work ethic. Even as a teenager when he became a Golden Gloves boxing champion, he showed his ability to apply himself and be one of the best at whatever he turned his attention to. 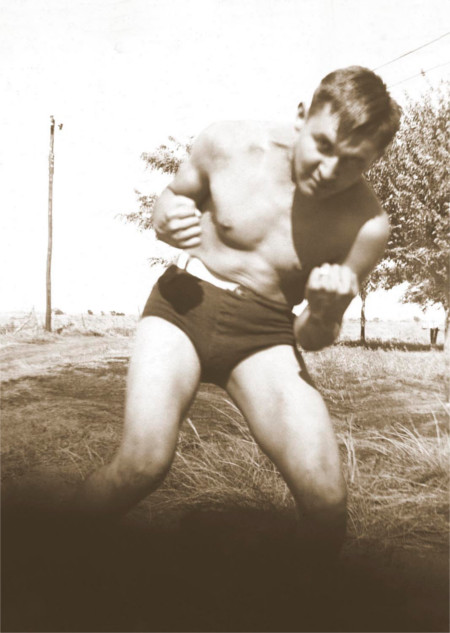 But it was his eye for artistic imagery and an innate talent for drawing pictures that was a steadily growing seed throughout his childhood. From an early age, he’d smuggle paper out of school to sketch on.  Not until his adolescence did the artist seed truly break soil.  Allan once said in an interview, “I was twenty years old when I finally decided that I really wanted to paint. I had learned a great deal about my tribal customs from my father and my mother, and the more I learned the more I wanted to put it down on canvas or something. That’s pretty much how it started.”

In 1934, Allan saw a notice at the Indian Office in Anadarko, Oklahoma, inviting applicants to join the Painting School at the Santa Fe Indian School, under the guidance of renowned teacher Dorothy Dunn. 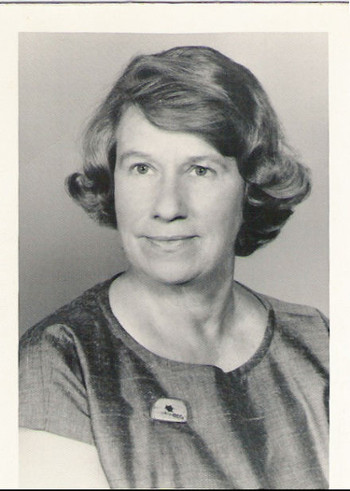 Much to the disappointment of his father, Allan applied and was accepted. It would be many years before Sam would forgive his son for such an unorthodox diversion from the family tradition and livelihood. Allan attended the Santa Fe Indian School from 1934 to 1938. At 20 years of age, he was the oldest in the class, but was to become the most famous.

It was during his time at the Indian School that his name was formalized from Haozous to Houser. Perhaps due to the Haozous name’s unfamiliarity to Anglo ears, he was assigned the name Houser by his elementary school administrators, and he chose to use it in signing his paintings. In the Apache language, Ha-oz-ous represents the sound or sensation of “pulling roots”.  David Rettig described it to me as “that feeling when you pull a plant from the earth and the point at which the earth gives way. That is haozous.”

In a sense Allan did “pull away” from the family livelihood of farming, which worried his father and was cause for a rift between them for many years, but he also remained deeply rooted in his tribal culture through his artistic representations of Native American life. 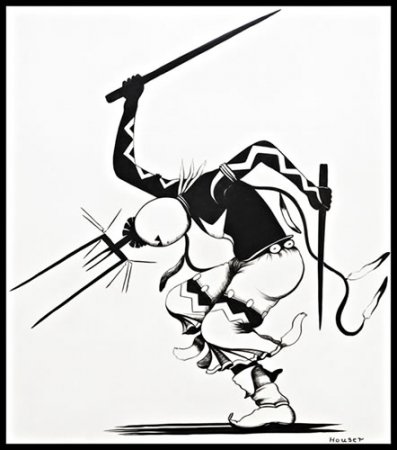 When Allan first arrived in Santa Fe to attend the Indian School’s art class, he’d work odd jobs and construction to make enough to survive. Shortly after graduating in 1939, he exhibited at the World’s Fair in New York City. Also in 1939, he married Anna Marie Gallegos. They had five sons, Lon, Roy Philip, Bob and Stephen. Bob and Phillip became renowned artists in their own right. 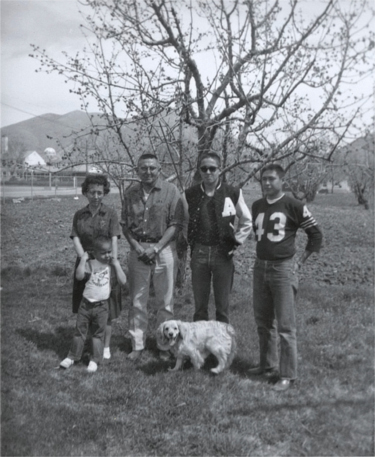 In 1938 and 1939, Allan was commissioned to paint full-size murals in the Department of the Interior’s headquarters in Washington D.C. 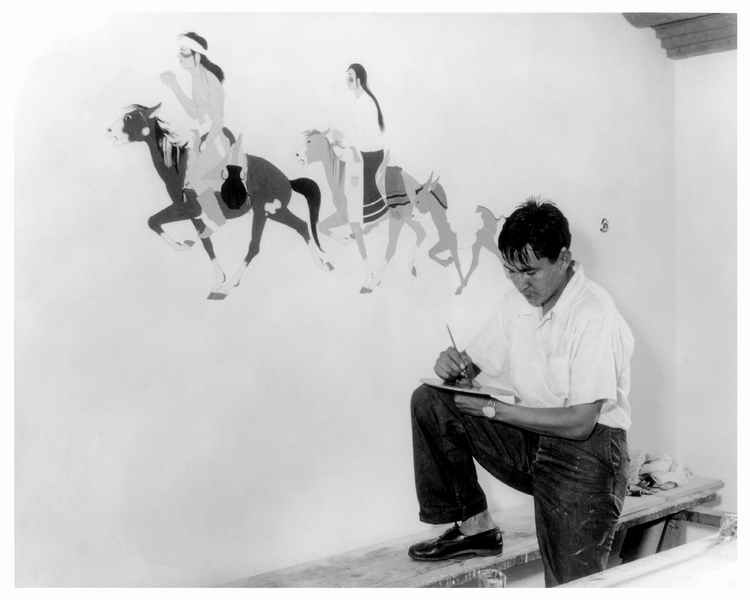 Despite the initial flux of commissions and shows, there were gaps in the road to financial stability that called for Allan to travel in search of work to support his family. 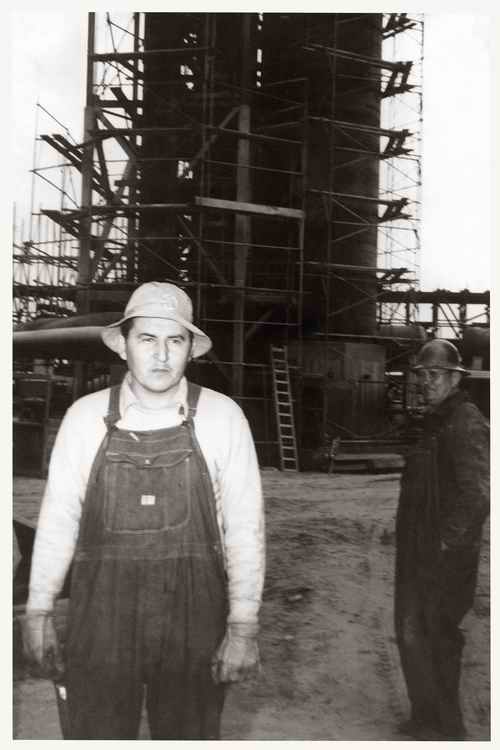 From 1942 to 1947, Allan moved his family to Los Angeles. During the war years, there was a demand for construction workers and welders. Allan found work as a pipefitter’s assistant. He’d work a full day shift and then continue working on his art at night.

David Rettig told me of a turning point for Allan that came in 1947. Back in the early 1940s, Allan had carved several small wooden sculptures. They were his only endeavors in sculptural work to that point. 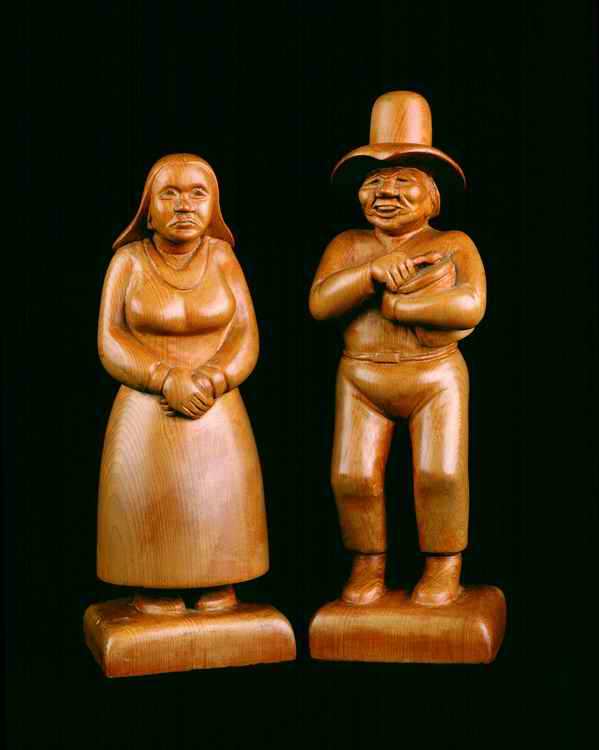 In 1947, he was contacted by Interior Department officials and asked if he could sculpt. When Allan said, “Sure,” they asked him to submit a proposal to the Haskell Institute in Lawrence, Kansas, for a monumental sculpture commission. He submitted his application and underwent the interview process that convinced the board he could undertake the task. Undaunted by his lack of sculpting experience in any material, let alone in large stone, Allan created a beautiful seven-foot-tall marble monument to honor the Native Americans lost in WWII. This piece was the foundation of his path toward worldwide recognition. 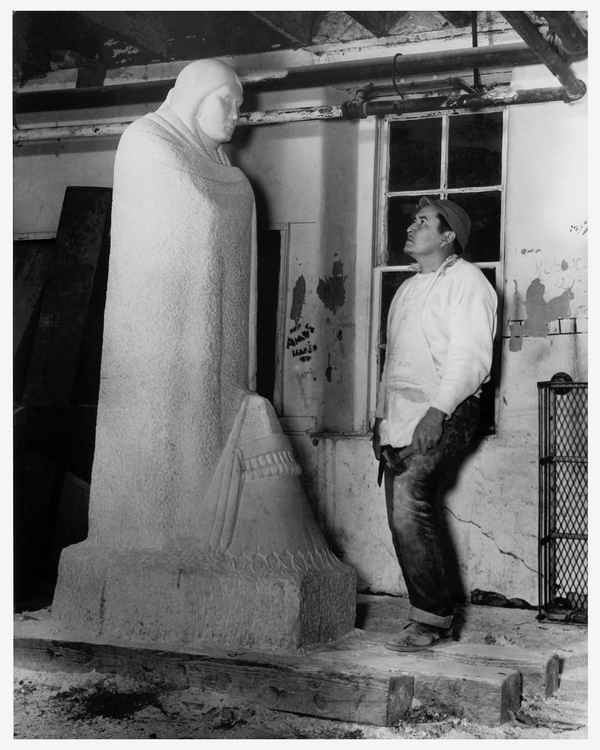 Comrade in Mourning was finished and dedicated in 1949. Allan took his parents to the dedication ceremony. It was at that point Sam began to acknowledge and respect his son’s choice to break from family tradition to become an artist.

From 1948 onward, the string of prestigious awards and commissions gathered momentum. To paraphrase, you might say that “the rest is art history,” as Houser’s work infiltrated the art world and transformed Native American art from the parochial to the monumental in myriad ways.

In 1951, he began his teaching career as artist-in-residence at the Inter-Mountain School in Brigham, Utah. As museums around the world acquired works for their permanent collections, and gave him honorable recognition and awards, Allan continued an intense schedule. He worked hard teaching by day, and dedicated his nights to his art studio, developing his unique vision of the modernist style in both representational and abstract works in sculpture and painting. 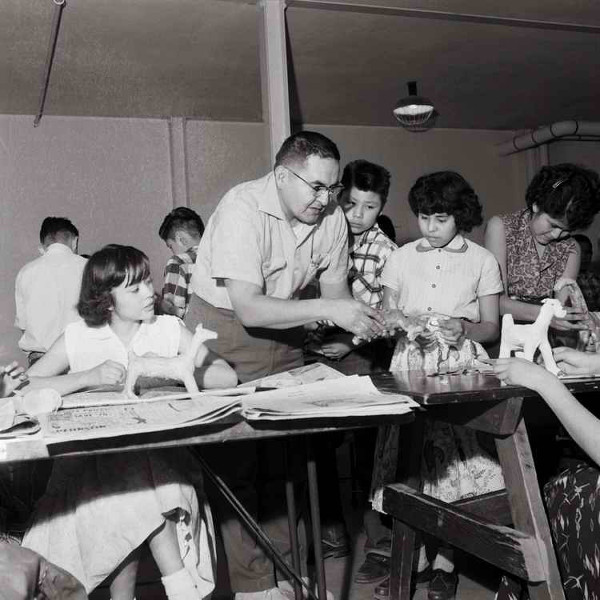 In 1962 the family returned to Santa Fe, where Allan taught painting and sculpture at the Institute of American Indian Art. He loved teaching and was very devoted to his art students. His teaching career spanned 24 years. 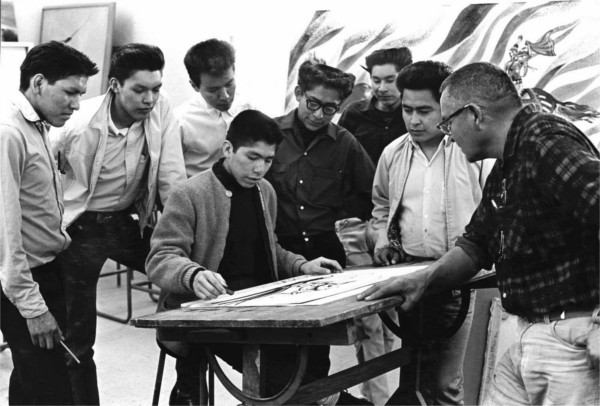 In 1975, at the age of 61, Allan finally felt it was time to retire from teaching and focus full- time on his art. For the next 19 years, he maintained a rigorous schedule practicing his passion, exhibiting works in museums, and earning prestigious commissions and numerous national and international awards. During his career, major exhibitions of his work were presented in Berlin, Paris, Tokyo and Vienna. 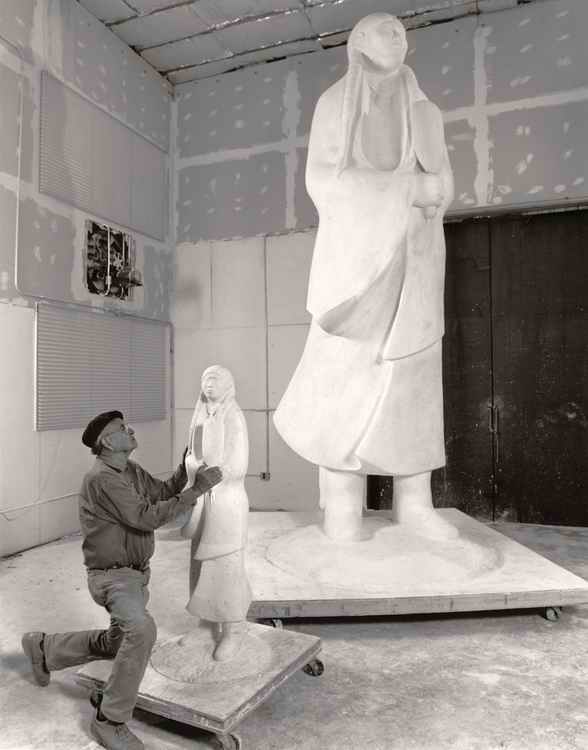 Allan working on the plaster for bronze casting of “As Long as the Waters Flow.” circa 1988. Monument was commissioned for the Oklahoma State Capitol Bldg. Houser family archive.

However well known and well honored Allan became, it never seemed to change him. David Rettig remembers him as “humble, and very generous with his spirit and time. A soft-spoken man who would offer you the same attention as he’d given the President that he’d just received an award from.” 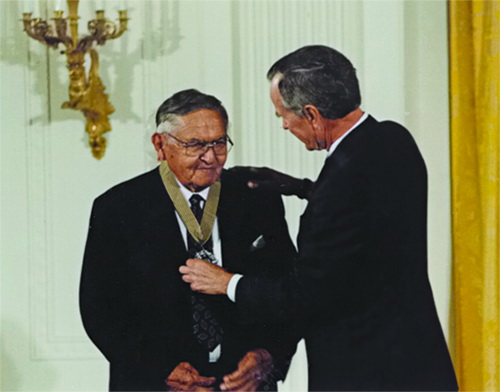 In 1993, David recalls spending Christmas Dinner with the family. Allan had a cut on his hand that he received when pulling canvas off a stone he had been working on. It was particularly slow to heal and he told David that he didn’t feel too good. But he continued to work. Eight months later, on August 22nd, in his Santa Fe home, Allan died of cancer. He is survived by four of his sons, three grandchildren, two great-grandchildren, and his wife Anna Marie, who celebrates her 103rd year in 2015. 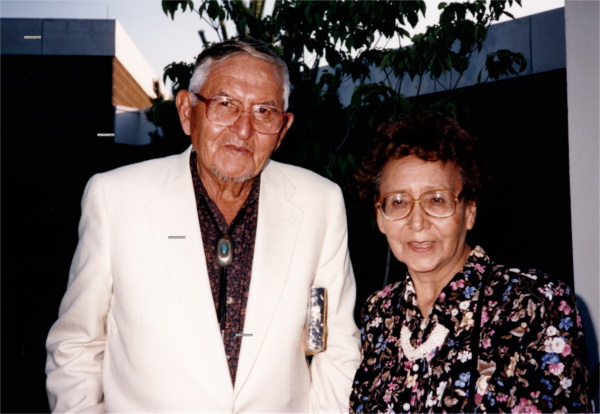 Allan maintained his rigorous schedule to the end. In his final year he completed over forty sculptural works, including the twelve-foot-tall monumental bronze “Unconquered,” as well as hundreds of drawings and sketches. 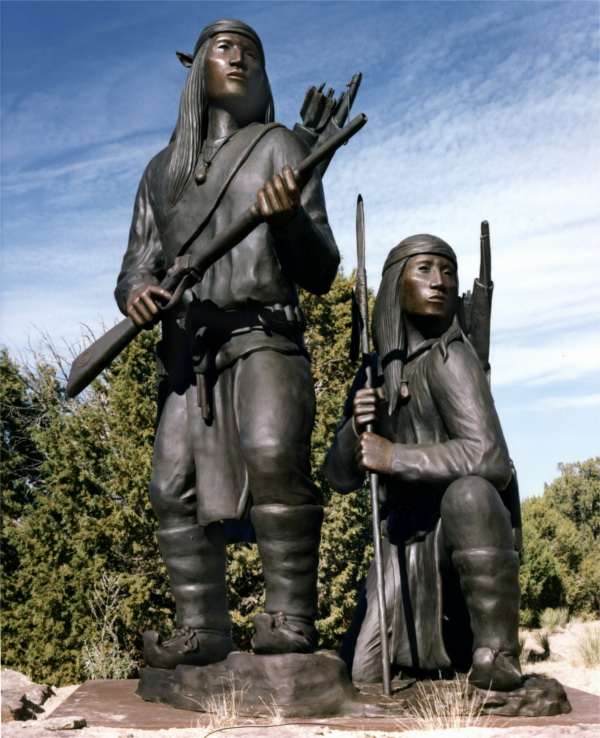 Allan Capron Haozous Houser was devoted to his art and created a vast, vibrant legacy that lives on. 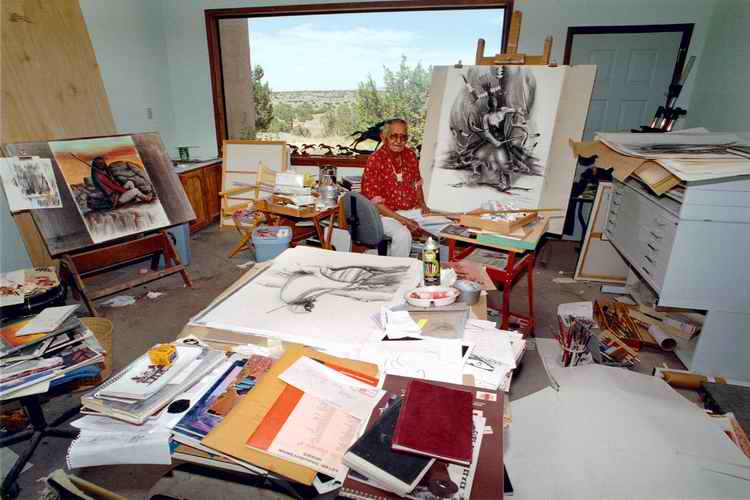 Allan’s extensive body of work, imbued with his spirit and that of his Native American ancestry is legendary, and continues to work as hard as he did, with numerous museum exhibits and shows each year. The Allan Houser Gallery celebrated the 100th anniversary of his birth in 2014, with multiple exhibitions that carry forward into 2015. 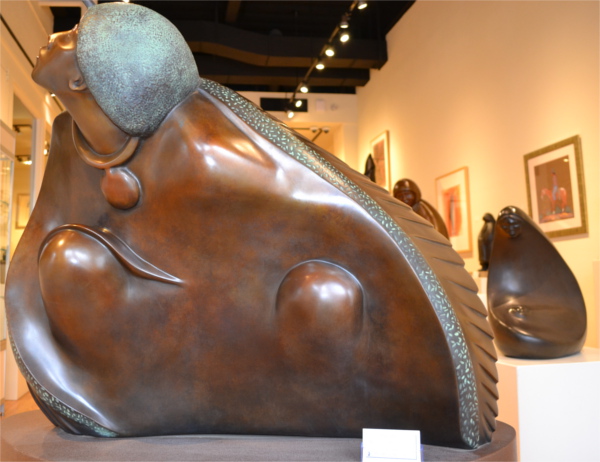 We’re fortunate his teaching career brought him back to Santa Fe. Today, the Allan Houser Gallery offers us a close connection to his iconic art at 125 Lincoln Ave, suite 112. Just steps from the historic Santa Fe Plaza, the gallery shows a variety of Allan’s work year-round, and David Rettig is often there to offer deeper insight into the man and the artist he knew. 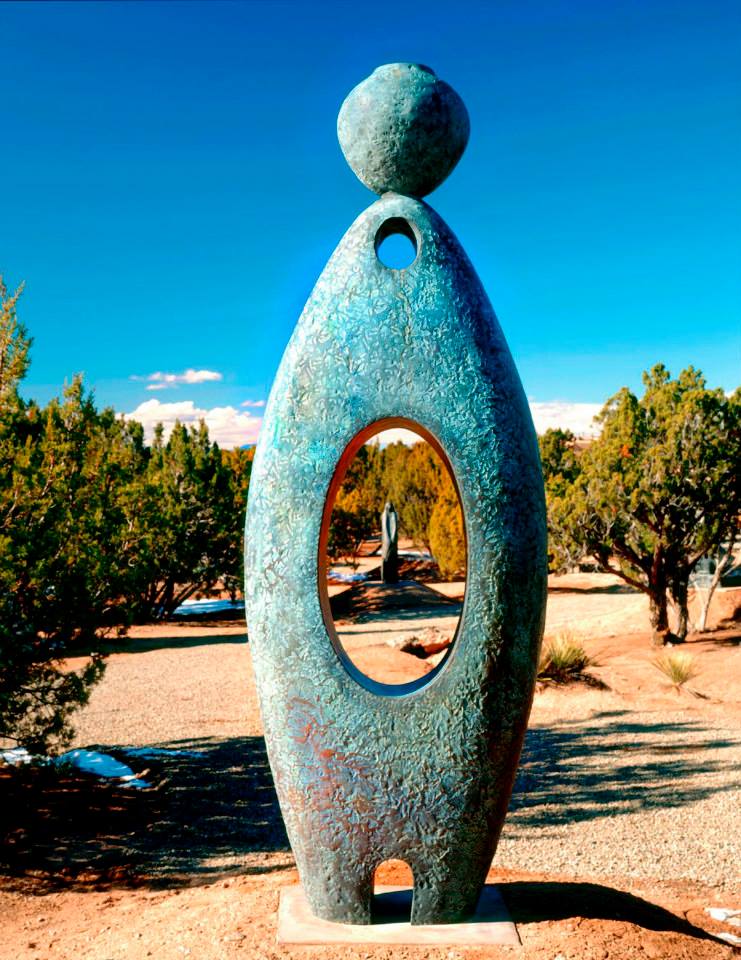 During the summer months, by appointment, you can take a guided tour of the spectacular sculpture garden at the family property off Highway 14 (the Turquoise Trail). Call (505) 982-4705.

For more information on Allan Houser go to: http://santafeselection.com/galleries/allan-houser-gallery

Thank you for reading my article. Please sign up to receive my monthly posts on the history, culture and people of Santa Fe by entering your email address in the “subscribe” field on the home page. Thank you!

10 thoughts on “Allan Houser-The Making of a Legend”