Santa Fe Walkabouts began in 2008, and became Santa Fe Mountain Adventures in 2016. The story behind how owners Sue and Georges met, and created the top outdoor adventure company in Santa Fe, is a fascinating series of events, coincidence and destiny.

I met up with Sue and Georges Mally to learn more about them and their highly popular custom adventures. In a quiet corner of Casa Chimayo Restaurante, I was moved by their respective stories of struggles and exile from their countries of origin, and the extraordinary tale of how they met in Santa Fe. I couldn’t help wondering, Was it only coincidence that they met for the first time on the Plaza that sunny September afternoon? Or was it Santa Fe working its Cupid magic?  You decide. 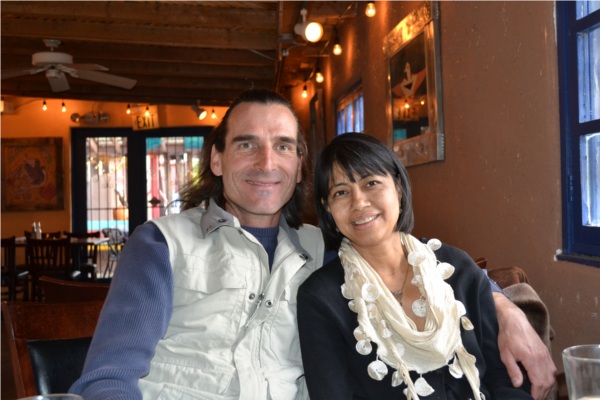 Sue and her younger brother were born in Burma during the political upheaval of the 1960s, when the country was ruled by an aggressive military regime. Sue’s parents knew they needed to escape in order for their family to be safe and flourish. In 1969, with the help of friends and fake passports, the family escaped, with one suitcase each. Sue was then seven-years old and her brother was six. They made their way to Malaysia.  The family were forced to renounce their Burmese citizenship. In Malaysia, Sue was able to go to English-speaking schools, and at the age of 17, she came to the U.S. to attend college in Washington D.C. 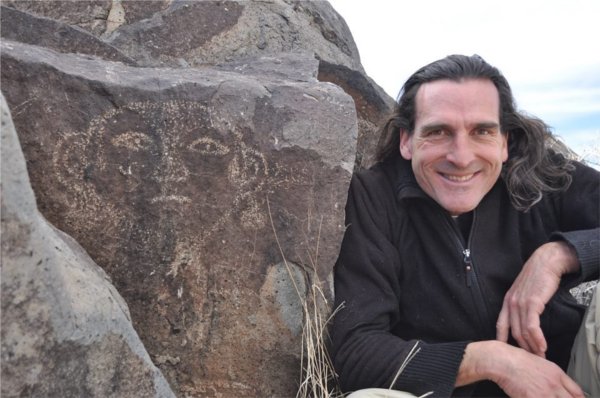 Georges was born in Bulgaria during the Communist regime. Both his grandfathers were Christian Orthodox priests, highly respected in the small villages they called home. Their status in the community targeted them as threats to the Communist ideology and they were imprisoned.  Both Georges’ grandfathers endured the atrocities of the “gulags” (Soviet-style forced labor camps) for 10 years. It was 1969, the same year Sue and her family were escaping Burma, when Georges’ young parents escaped to Trieste, Italy in search of a better life to raise their son. They were two of only five people to escape from Bulgaria that year.

Georges stayed with his mother’s parents until he could be sent for. He was 3 years old when his parents left. They made the arduous journey to Trieste, only to be taken to Naples and held in a refugee camp for a year to ensure they weren’t spies.  After their release, they settled in Paris.

Finding a way to get Georges out of the country was extremely difficult and dangerous for his parents. They had to remain hidden from the Bulgarian authorities to avoid being killed for their escape. There were many attempts to get Georges out, but they all failed. Georges and his grandparents made numerous trips to the airport over the years, believing he’d be able to leave with the passport they managed to get for him. Every time he was turned away for some seemingly trivial reason.

One day, Georges was playing soccer in a school yard, when both his grandmothers rushed him into a taxi and whisked him back to the airport. They had news that it would work this time, and it did. Georges got on the plane to Paris with a few photos his grandmothers had stuffed in his pocket, and nothing more than the clothes he was wearing that day. He faced a new and unfamiliar life with parents who were, by now, strangers to him. It had taken eight years for them to be reunited. He was eleven years old.

Sue first arrived in Santa Fe in 2001. She was in search of the ideal retreat from her corporate consulting work and the bustle of the life she’d made for herself in New York City. “The blue skies, mountains and adobe buildings really attracted me,” said Sue. “Out of all the places I visited in New Mexico, Santa Fe felt the most friendly and welcoming to me. And so different from the East Coast.”

After repeated visits, Sue eventually bought a little adobe home in 2005. She’d return as often as she could and spent a lot of time exploring the mountain hiking trails and discovering known and lesser known sites and spectacles. 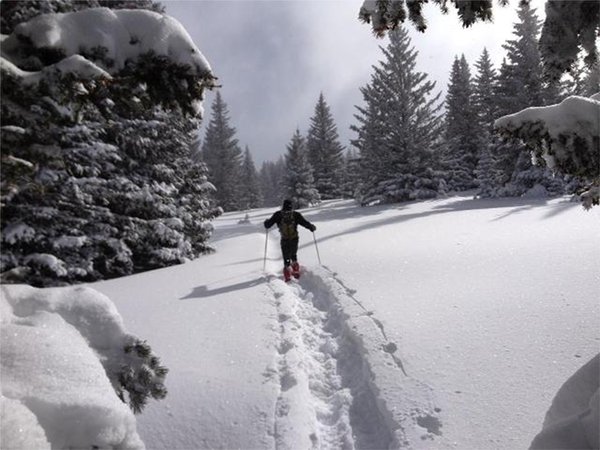 Georges grew up to become a manager at a large corporation in Paris. In his free time, he was an avid cyclist and outdoor adventurer. His vacation time was often spent cycling all over Europe. In 2006, he was planning a month-long trip and realized Europe wasn’t quite big enough. Its borders and visas were prohibitive. So he looked to the U.S. to find broader horizons where he could cycle for a month and still be in the same country. He liked the look of Route 66 – it was his birthday year. The journey began in Chicago and ended in Santa Monica, California. He was to cover 8 states and 2,200 miles in 30 days .

On his map, he read about the Oldest Capital in the United States at an elevation of 7,000 feet, and became intrigued.  His mind leapt to the tundra and steep climbs he’d made in Switzerland. On September 23rd, he was surprised to find he’d made the gradual climb to Santa Fe and arrived at 7000 feet. “It wasn’t at all what I expected. I had to double-check my elevation monitor to make sure it was working. There were still trees and grasses at such a height, and open expanses of land. There were no switchbacks, no tundra, as in the high elevation towns in Europe,” he says in the strongest French accent you’ve ever heard!! 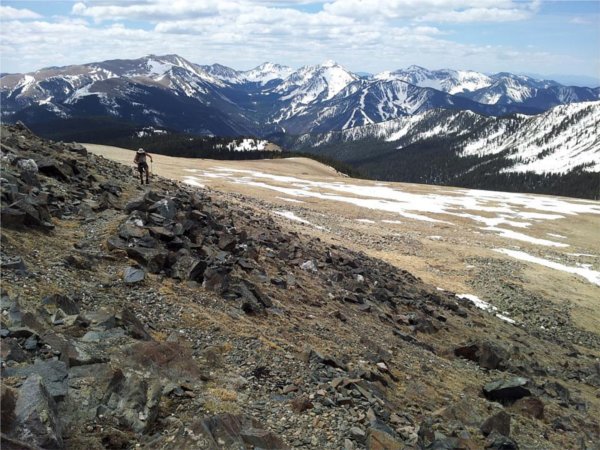 As he prepared to leave Santa Fe the next day, a spoke broke on his bike. He got it fixed, but rather than head out of town after the repairs were made, he decided to postpone his trip for a day to explore. He took a ride up the mountain to Hyde Park.  Returning via the Plaza, he took a spot on a park bench to listen to the live music from the bandstand. 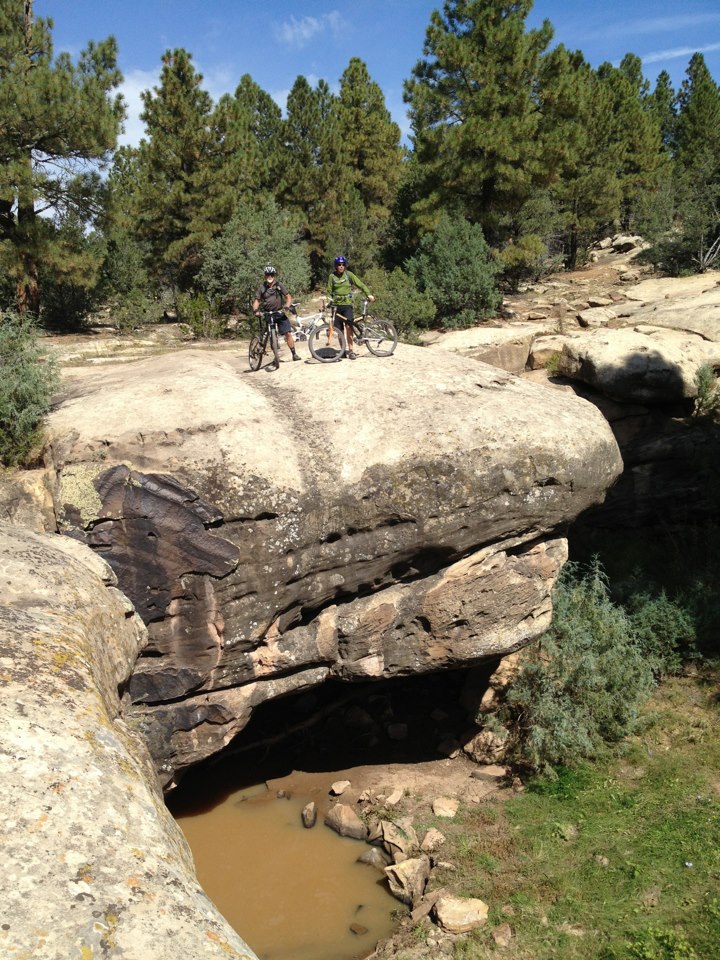 This same day, September 24th, Sue had been shopping for gifts for her friends and cowboy boots for herself, before her return to New York City. She also stopped to enjoy the live music on the Plaza for a while. She moved toward a bench to sit when a very tall man with a bike sat down there. “He took my bench!” she recalls, laughing. “So, I started to leave when a lady nearby noticed my shopping bag and asked me what I’d bought. I told her ‘cowboy boots.’ And the guy with the bike chimed in saying, ‘Boots? Isn’t it too early for boots.’”

“’It’s never too early for boots.’ I said, and I couldn’t help notice that French accent.”

And that was the beginning of a long, successful love affair between two people from faraway places with dramatically similar histories, and the City Different and all its surrounding wilderness. 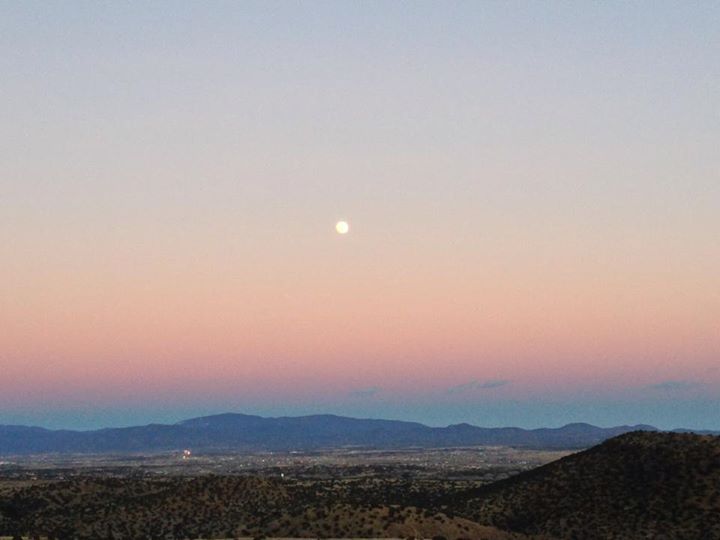 By 2007, they’d quit their corporate positions and moved to Santa Fe to create a new life together. “It took a year for us to figure out what to do for a living,” said Georges. “We knew how much we love touring, hiking and biking the area ourselves, and its very special history and culture. And we love sharing it with others. It was a natural transition to set up a business customizing tours to guide people to whatever they wanted to do and see.” In 2008, Santa Fe Walkabouts was born.

In 2016, they changed the name to Santa Fe Mountain Adventures, now ranked the number one activity company out of more than 60 in Santa Fe by TripAdvisor. They offer guests a full spectrum of customized adventure options from scenic walks, hiking and biking, to cross-country skiing, snowshoeing, and Pinzgauer off-road tours. 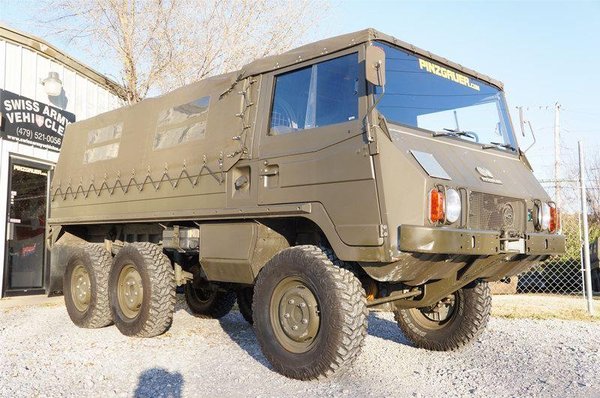 “What’s a Pinzgauer?” I hear you ask. It’s radically different from any 4×4 you’ve ever experienced, and not just because it’s actually a 6×6. This official vehicle of the Swiss Army grabs like a caterpillar on rugged terrain and is a smoother ride than a cushy SUV. 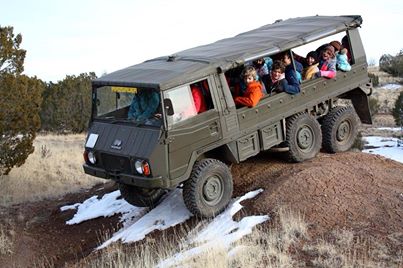 Sue and Georges now have two Pinzgauers to tour with. They are the only tour company in New Mexico to offer this particular unique experience. The latest Pinz addition can hold up to 14 people. It’s a fun and different way to experience the varied terrains and vistas in and around Santa Fe. 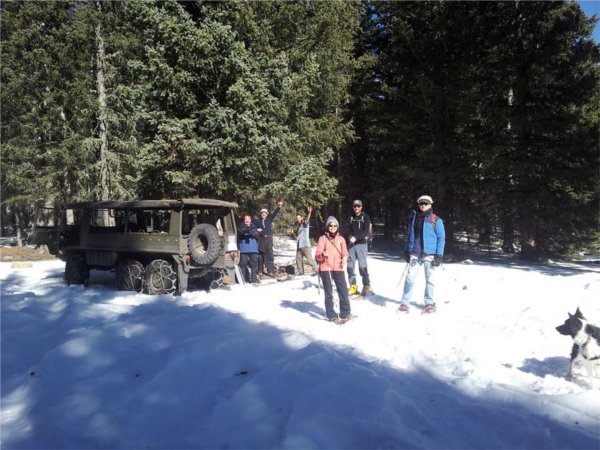 “I guess the least convoluted way to answer why we chose a Pinzgauer versus another off-road vehicle is chance,” said Sue. “In many ways, that seems to be the undercurrent of our lives.  Lots of good luck and opportunities that present themselves.” (But that’s a story for another time.)

Santa Fe Mountain Adventures offers hundreds of tour and trail options to choose from in Northern New Mexico. Many of which require special, costly permits through the appropriate state and federal agencies. “We are all guardians of the land and the permits help ensure the land stays healthy and cared for,” said Georges, who is often out trekking and scoping more places to guide their guests. “There’s always something new to find.” 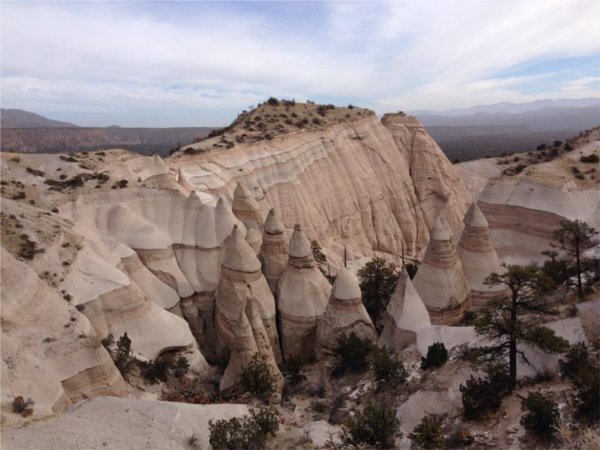 The diversity of cultures in and around Santa Fe, its history and unique architecture, and the variety of seasons allow for year-round, fun outdoor experiences. Sue and Georges’ enthusiastic passion for the New Mexico outdoors is a palpable quality they impart to their clients. In 2013 alone, they hosted as many as 1200 guests.

“Santa Fe is the first place we’ve each lived where we don’t feel the need to get away from it,” says Georges. “There’s so much to do here that we’re always entertained. And we love sharing that feeling with our guests from all over the world. We really enjoy exchanging stories of cultures and traditions.” 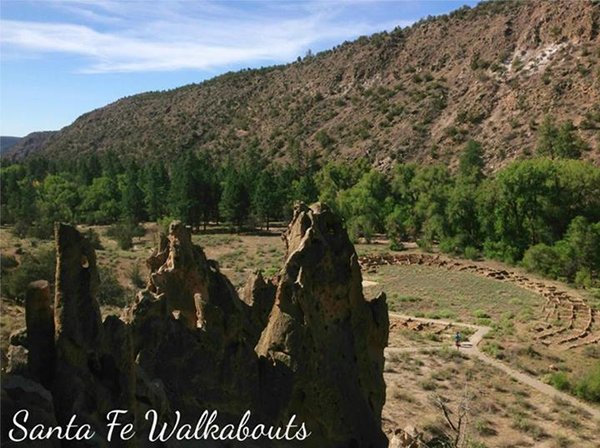 “The sense of rooted history and ancient traditions and cultures here is reminiscent of Europe,” says Georges. “Taos Pueblo, for example, is the oldest continuously inhabited place in North America. It’s been here for over a thousand years! And it is amazing to meet some of the families in Santa Fe and many of the rural villages that have been here for over 300 years. That really means a lot to us.”

Santa Fe is known as one of the most romantic spots in the country. It is an easy place to fall in love with, and in. The confluence of Sue and Georges’ lives happened in Santa Fe in an extraordinary way that September afternoon. They married in 2007, in true “outdoorsy” fashion. The freedom in the U.S. to marry outside of a church or registry office appealed to them. They chose Hyde Park, a trail-head and camping area just outside town, on the way up the mountain toward the ski basin. 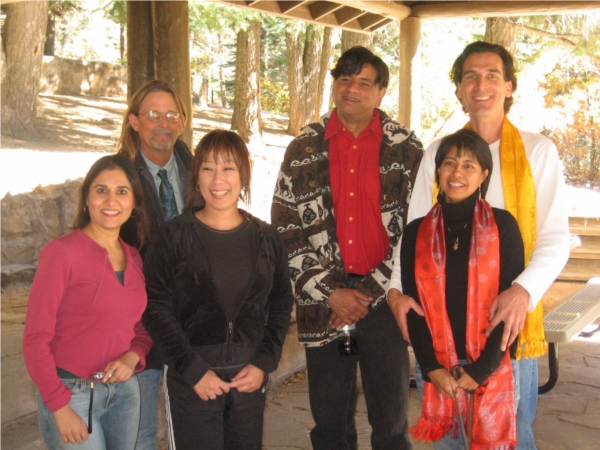 The Wedding Guests with Sue and Georges at Hyde Park

“It was a small, very informal ceremony, with just a few friends,” said Sue. Then she smiled and said, “Right after the ceremony we went for a three-mile hike to celebrate.” 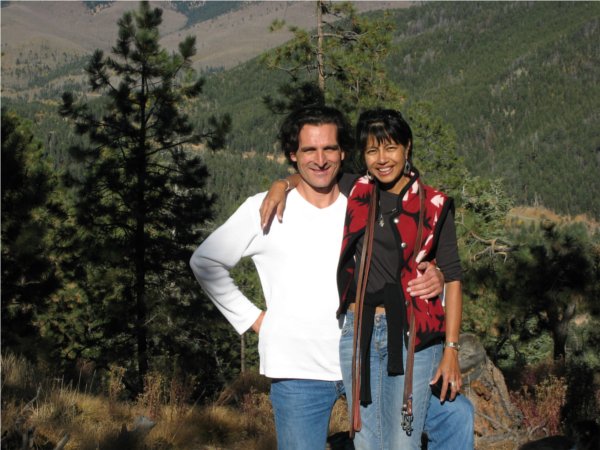 Santa Fe Mountain Adventures enjoys hosting small groups (from 4 -14 people) and solo travelers. It is helpful and recommended to give them some notice in order to plan the ideal outing. But, they also cater to the last minute caller in search of an exciting tour.

For more information on Santa Fe Mountain Adventures call (505) 988-4000 and go to: http://santafeselection.com/day-trips-activities/santa-fe-mountain-adventures

Thank you for reading my blog. If you’d like to stay in the know regarding Santa Fe, its people, traditions, culture, and the arts, please sign up to receive my monthly posts by going to the home page and entering your email in the “subscribe” field. You’ll be sent a confirmation by email. Thank you!!