Footprints: The Inspiration and Influence of Allan Houser. For almost a year, seven Allan Houser bronze sculptures have graced Milner Plaza at Museum Hill in the Museum of Indian Arts and Culture’s Footprints exhibit. The outdoor sculpture installation was in honor of the 100th year of Allan Houser’s birth, and the remarkable influence he had on Native American art, artists, and the art world at large. 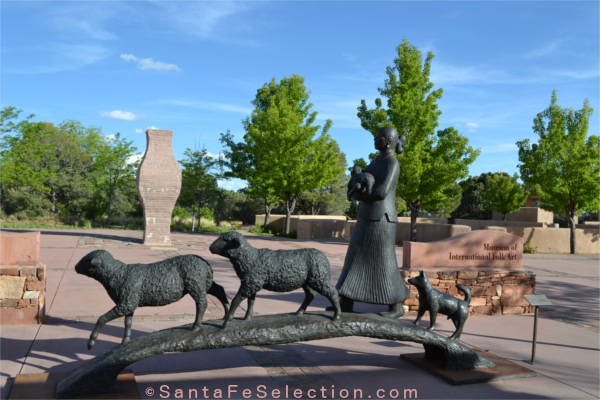 On May 30, 2015, the exhibit said its farewells in true Native American style. Houser relatives of the Fort Sill Apache tribe came from Oklahoma to perform music, songs, and the sacred Dance of the Mountain Spirits in honor of the event. It is rare for such tribal ceremonies to be photographed, and I am grateful I was granted permission to do so. 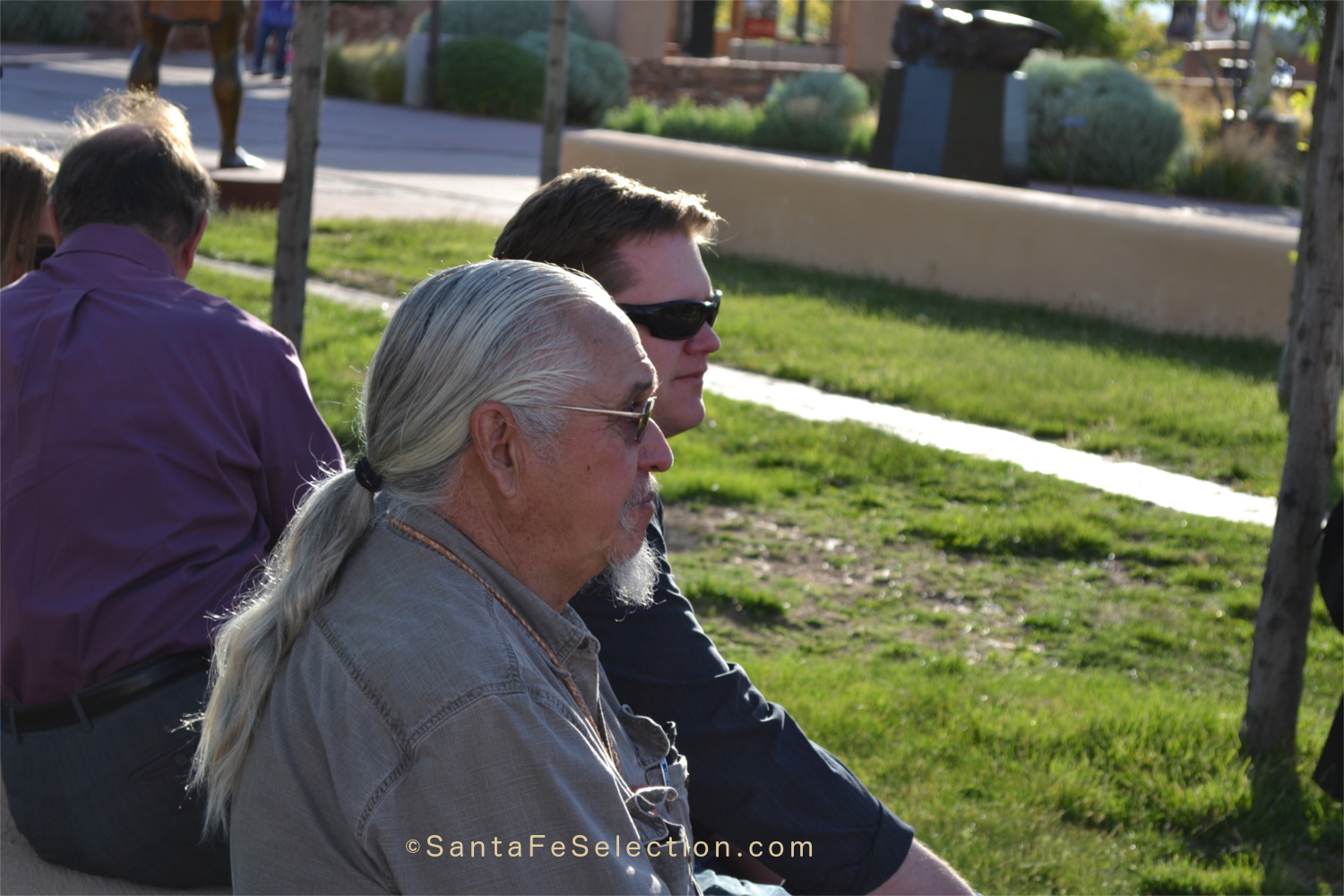 The installation included the works of celebrated Native American artists, whose work and lives were highly influenced by Houser, as his students and protègès.

Dorothy Grandbois, guest curator of the exhibit, wrote what Allan’s son Bob said of his father’s work and influence: “Allan was dedicated to depicting the dignity of native people. He expected us (his sons) to find our own paths and commit to our decisions.”

This event saw the coming together of many tribal traditions from the Chiricahua Apache, Turtle Mountain Chippewa, Southern Ute, Navajo, Jemez Pueblo, and Hopi. 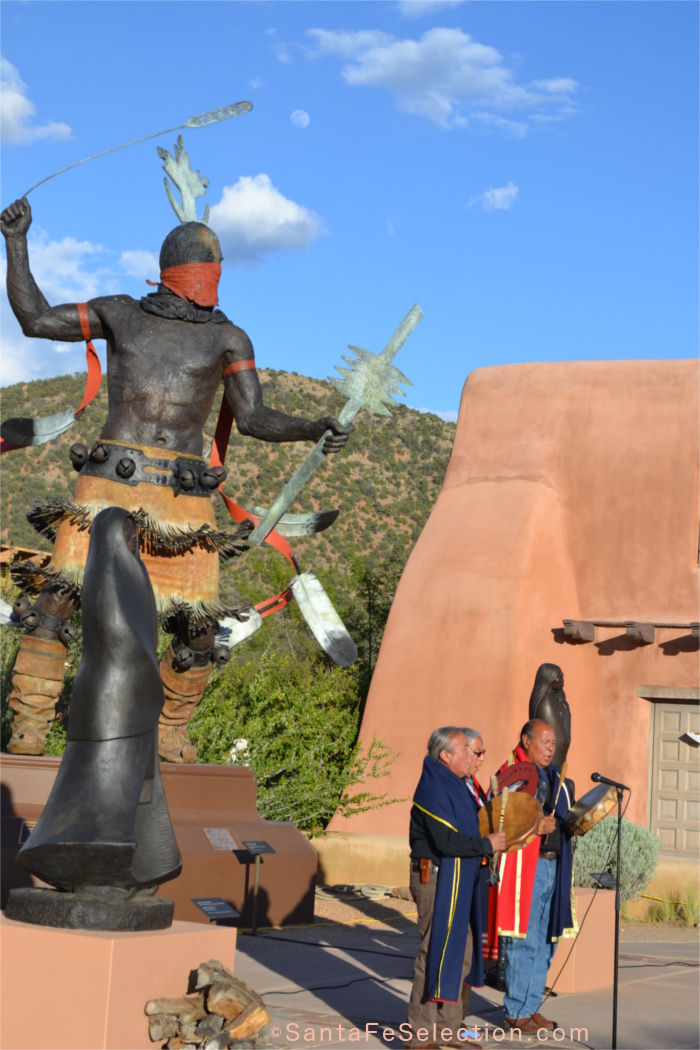 Craig Dan Goseyun of the San Carlos Apache tribe was an apprentice of Allan Houser’s from 1984 – 1990. He dreamed of doing “big, monumental sculptures that would remind people on the reservation of their culture and also raise their self-esteem and make them feel good about who they are.” 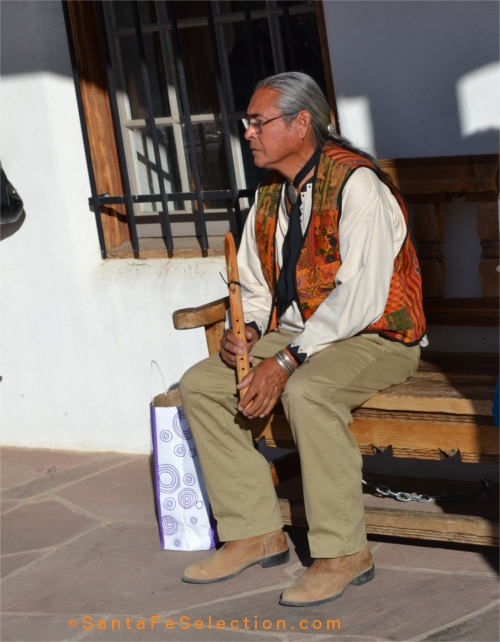 Philip Mangas Haozous watching the singers before performing the Native flute songs he learned from his father. 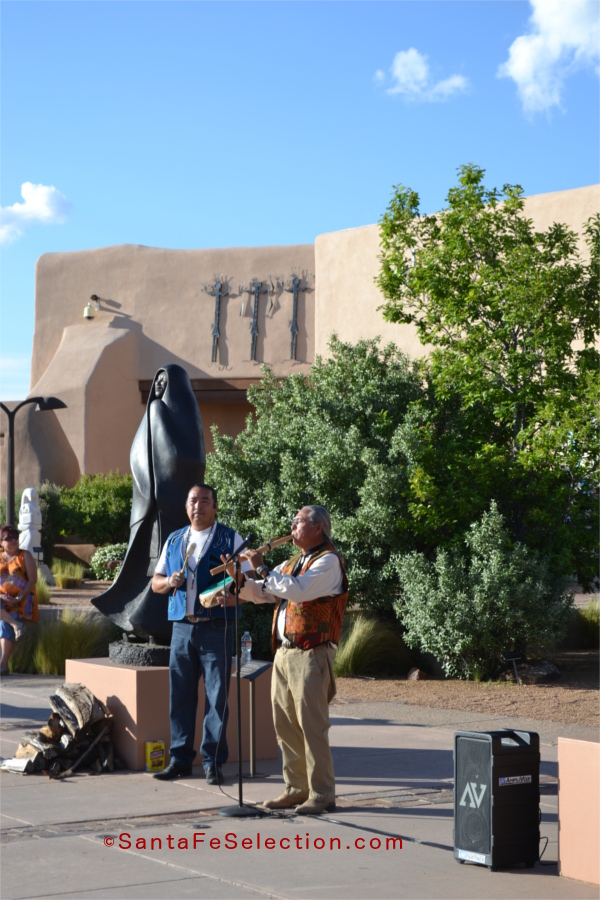 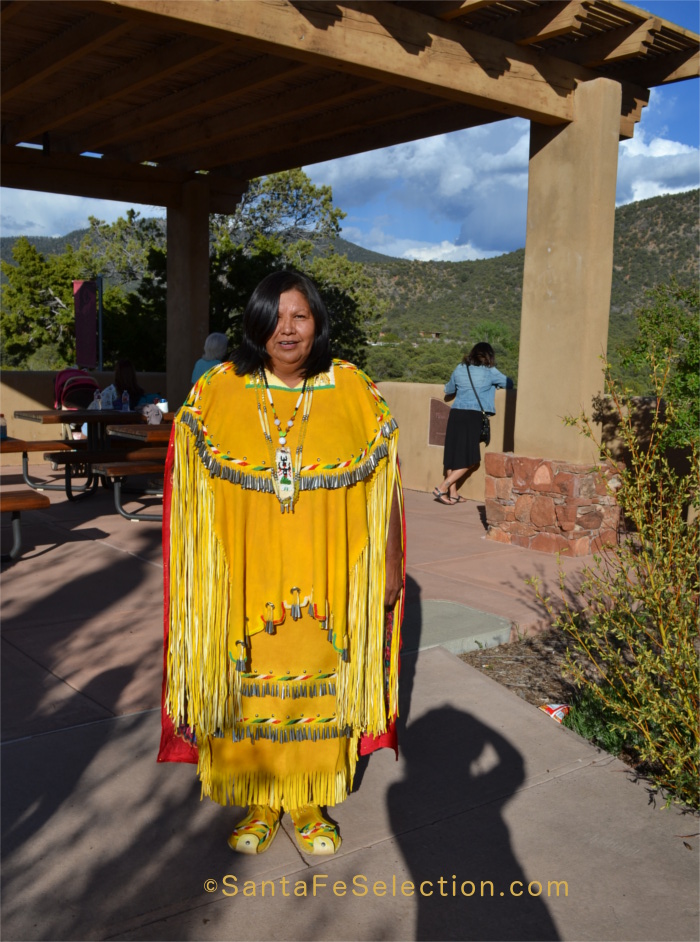 Pricilla Gooday was kind enough to let me take her picture before the dances began. The drums and calls of the Mountain Spirit Dancers were echoing through the arroyo as they practiced out of sight of onlookers. I was not permitted to watch them. 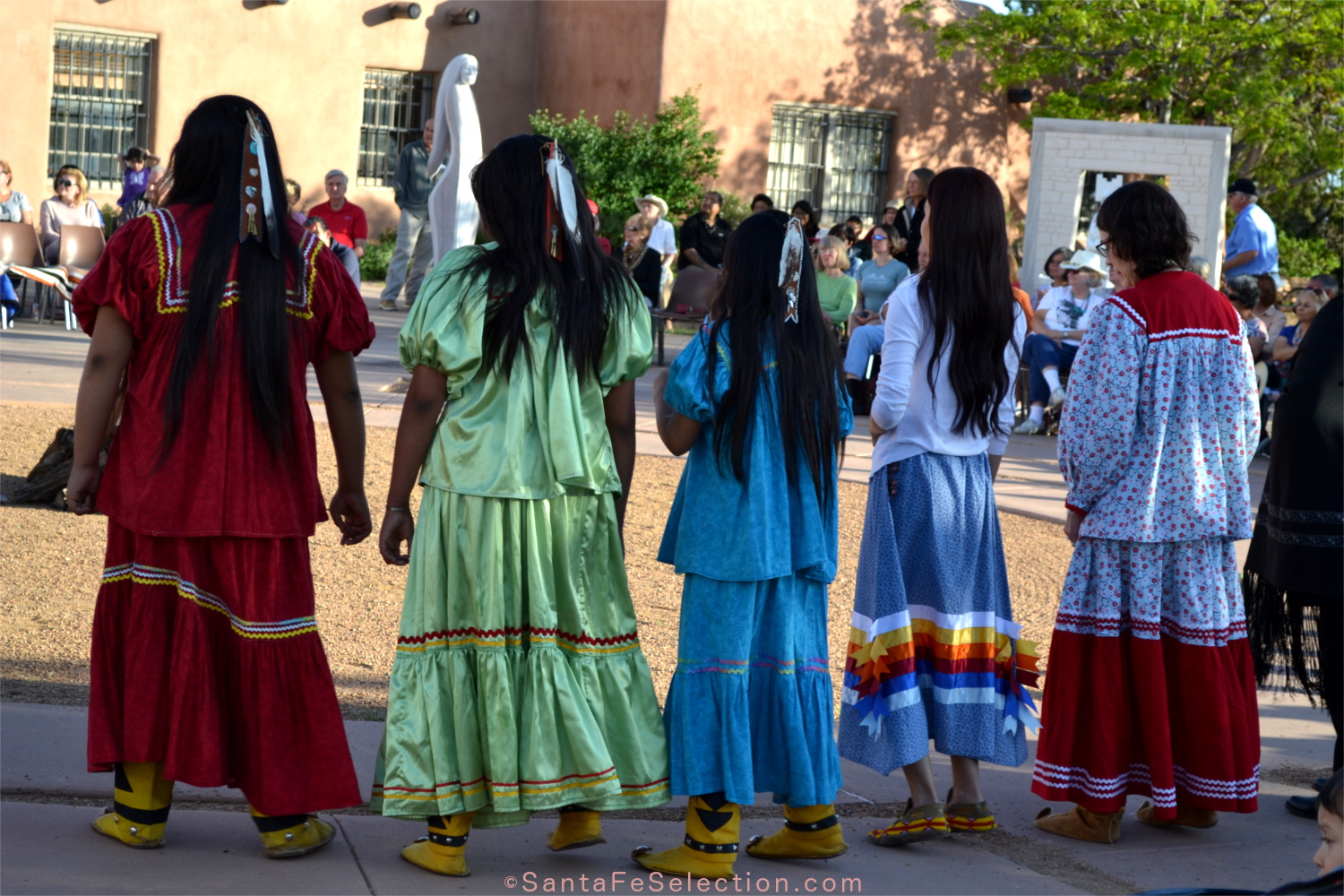 The Round Dance is a wonderful tradition where all are invited to participate. The drums and singers keep the beat as a large circle of family and friends dance around the central fire. 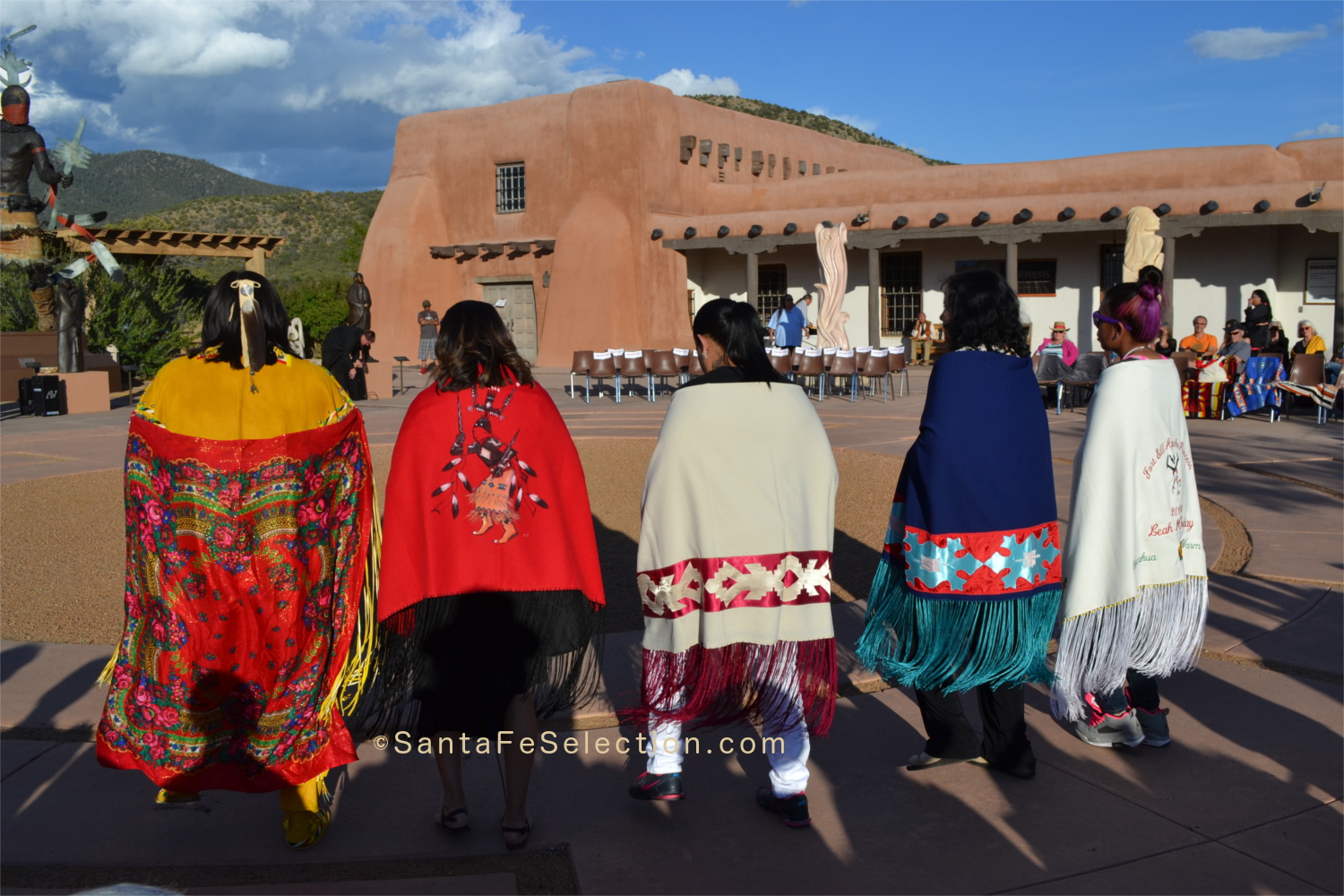 Houser’s wife Anna Marie attended, and even as she approaches her 103rd birthday, she participated in the Round Dance with a few family members and friends. 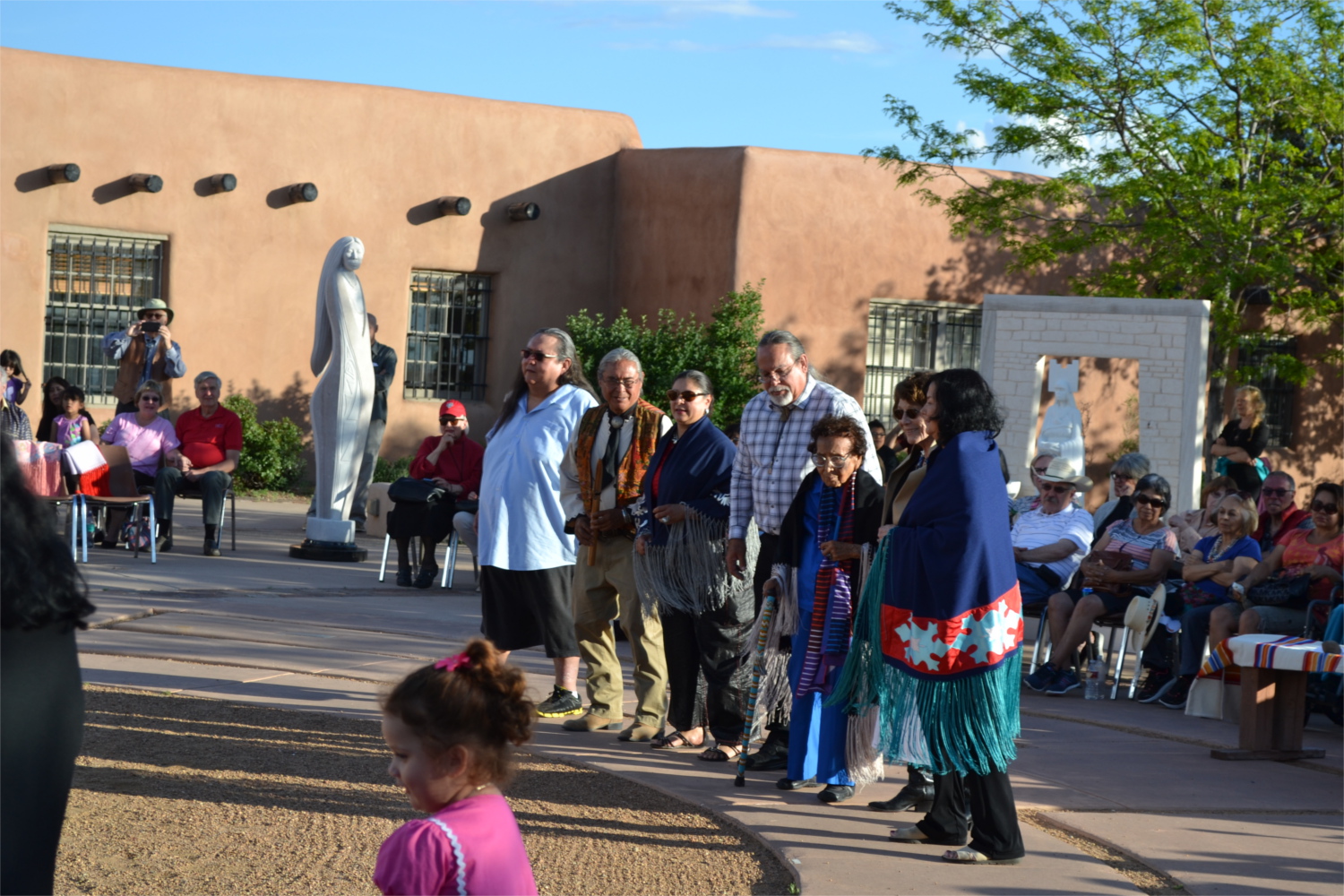 Anna Marie with friends and family taking a tour in the Round Dance. 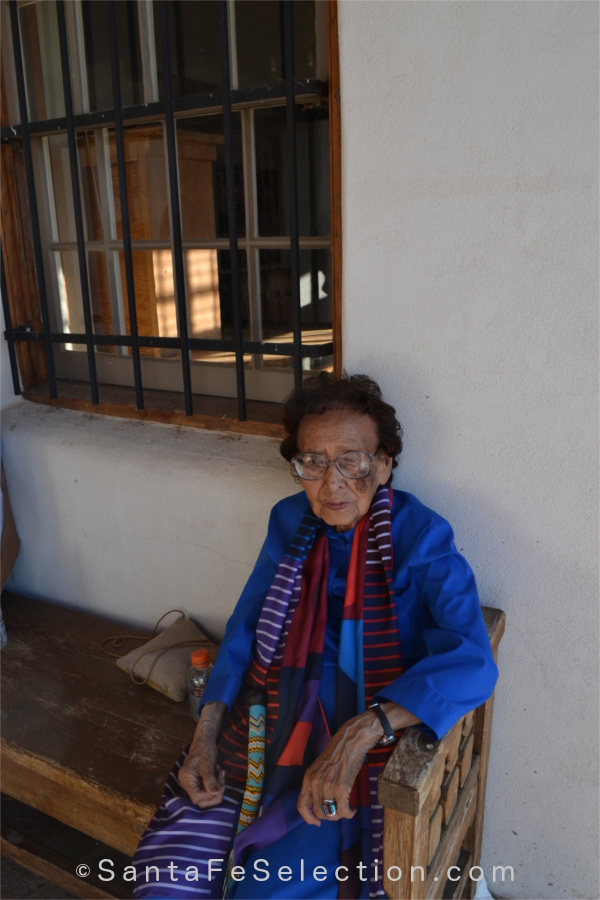 Nakotah LaRance, Cirque du Soleil performer and six-time world champion Hoop dancer, worked wonders with his athletic dance. While he danced in time to the fast pace of the drums, he was in constant motion, gracefully creating images and patterns with up to five hoops. 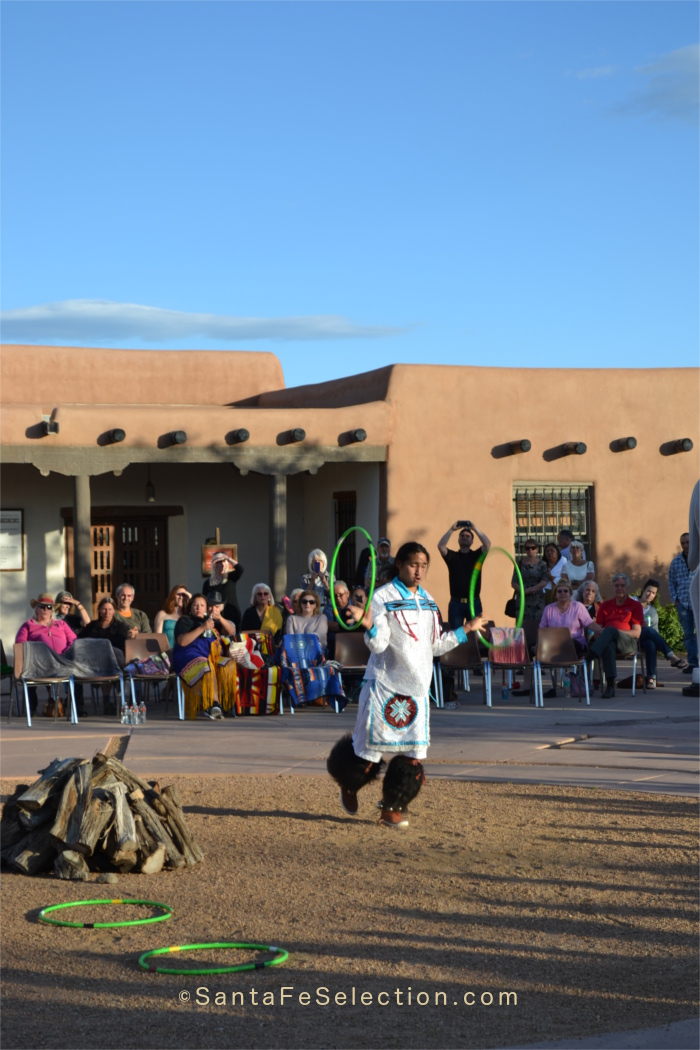 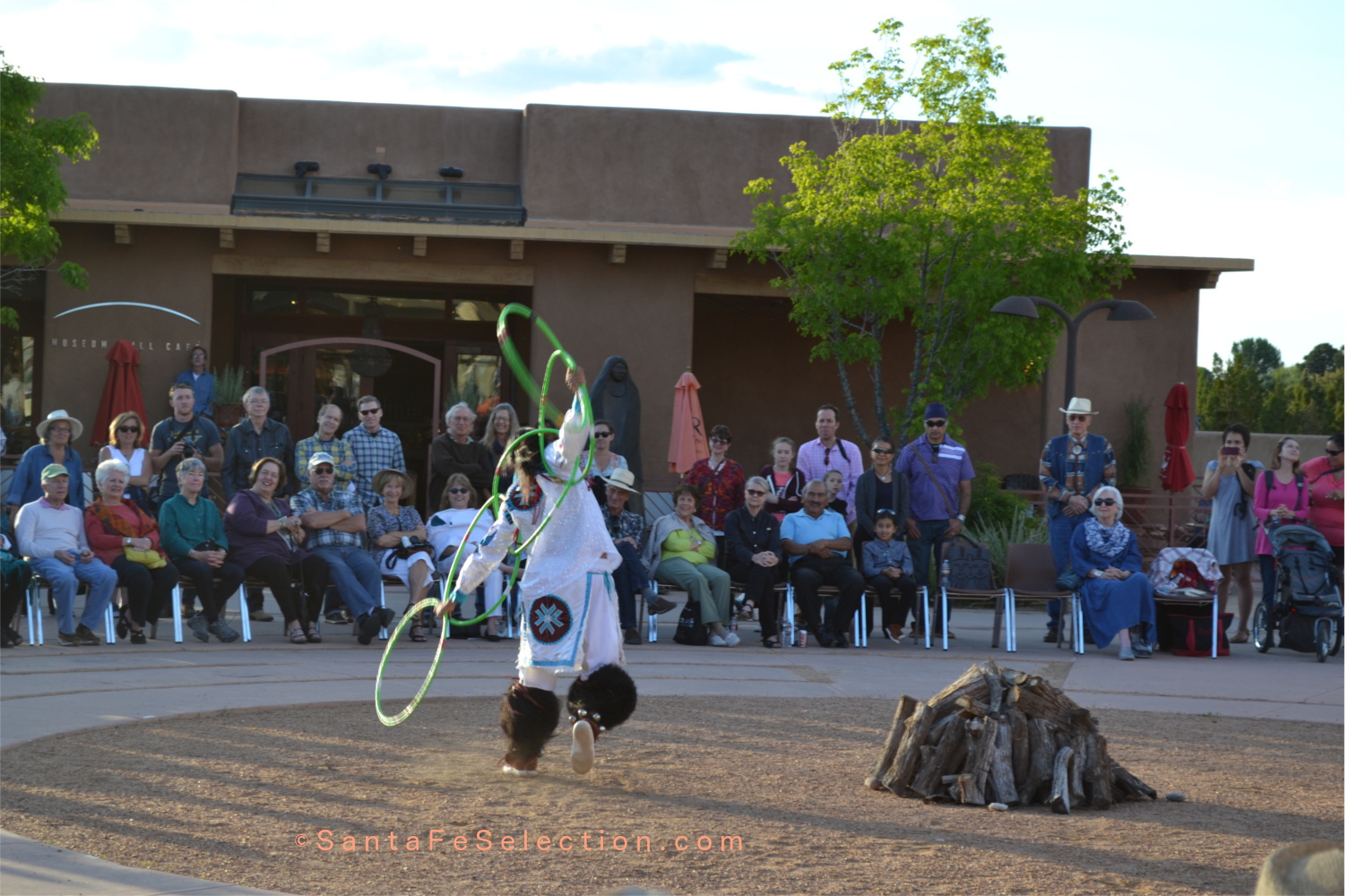 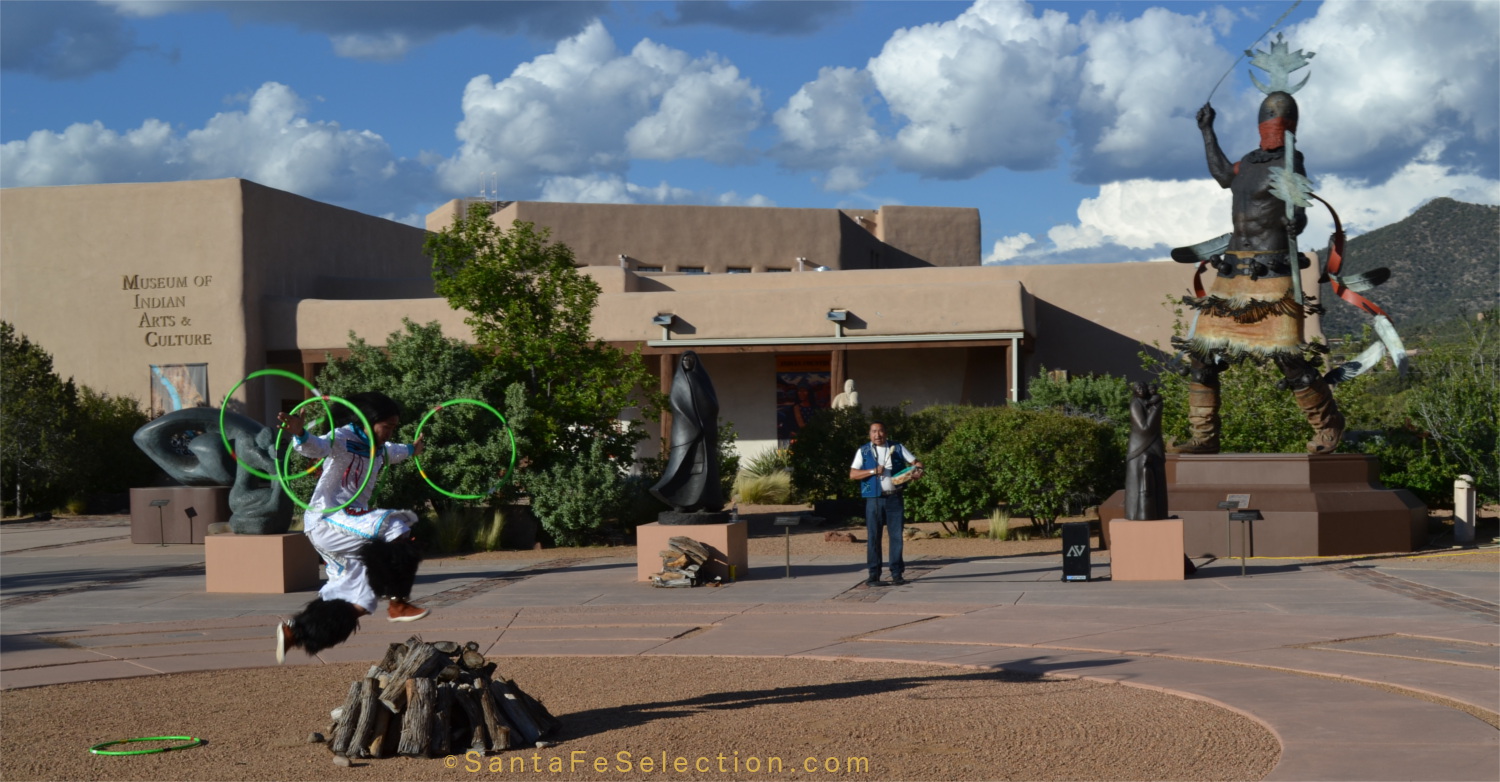 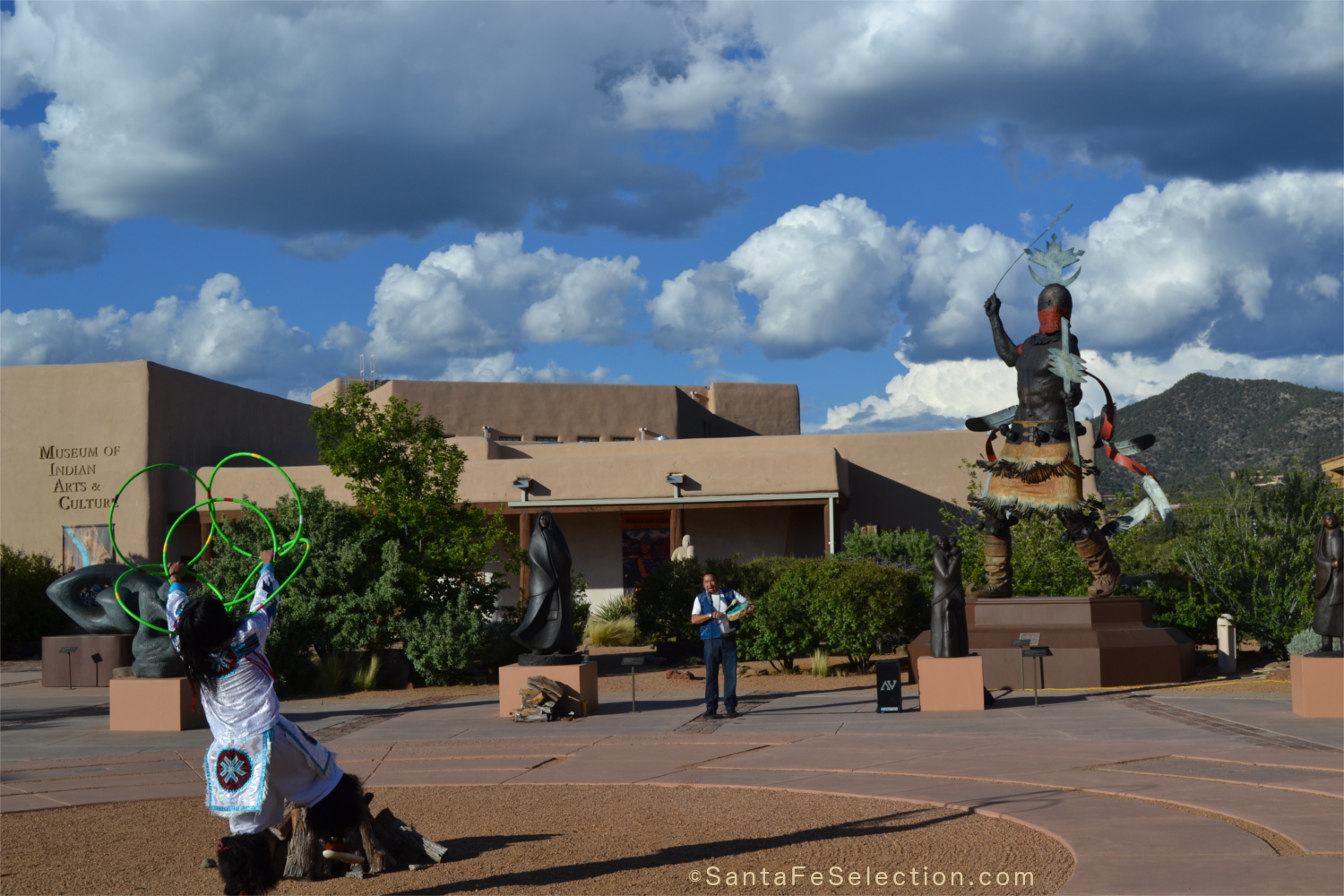 The Dance of the Mountain Spirits is a sacred ritual that takes place as the sun is setting. The twilight added to the magical air as the dance began, performed by the Gooday Family, Ft. Sill Apache Traditional Dance Group. 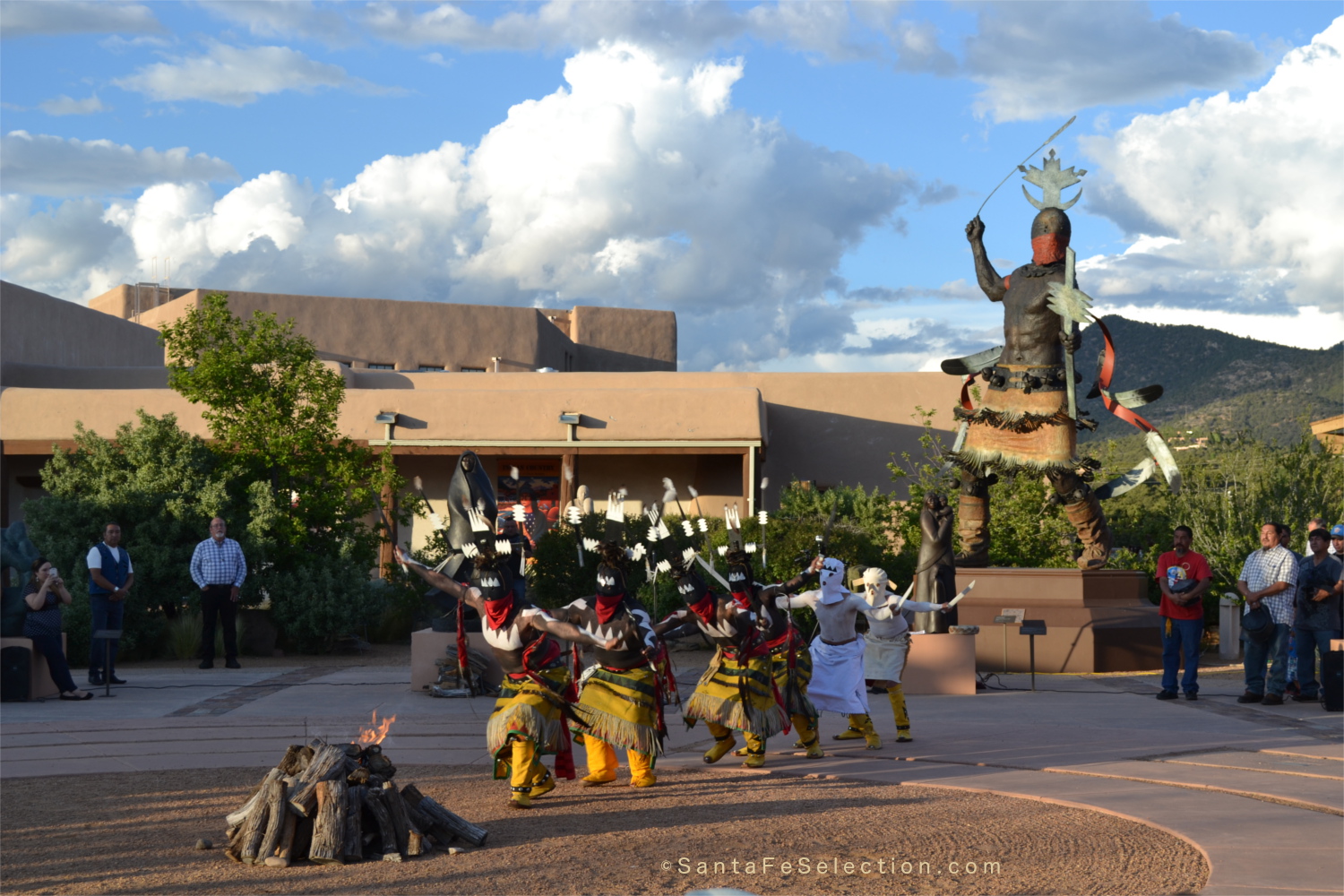 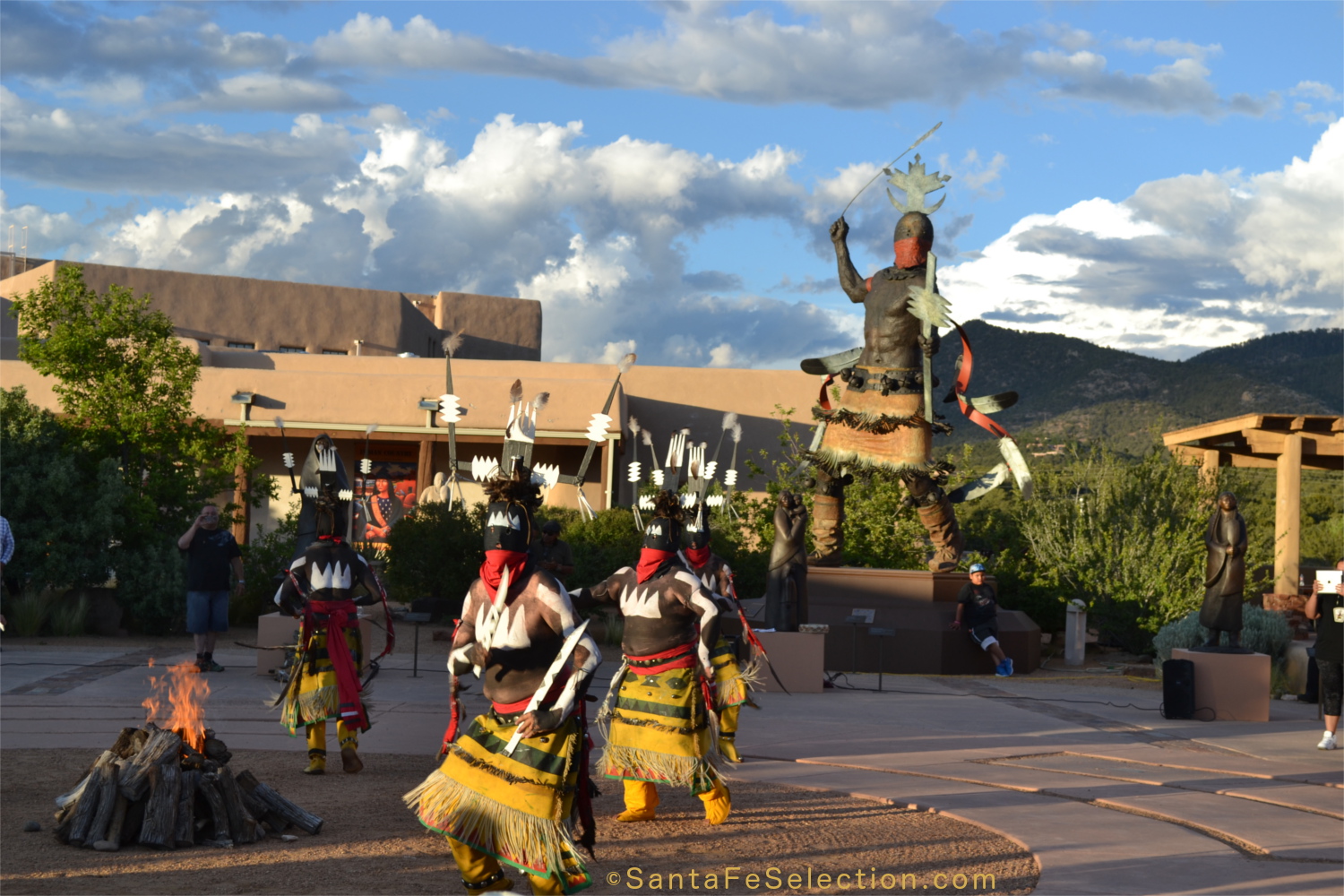 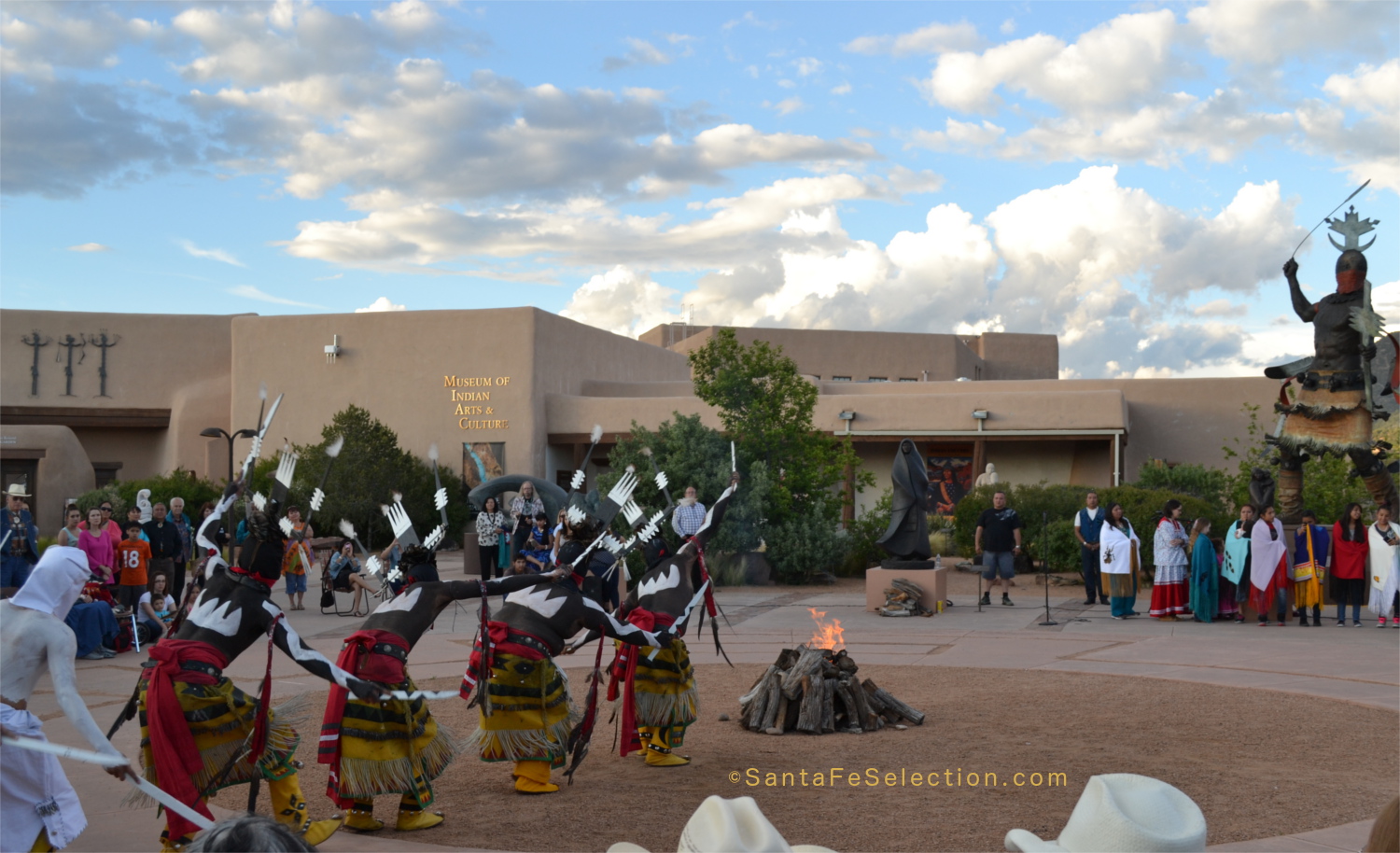 Museum Hill’s Milner Plaza will not be the same without these beautiful statues. Fortunately, for now, the museum has retained a collection of pieces that remain for public viewing.

Many thanks to David Rettig of the Allan Houser Gallery, Anna Marie and the Houser Family, and all the performers, for permission to take these pictures.

For more information on Allan Houser go to: http://santafeselection.com/galleries/allan-houser-gallery

For more information on the Museum of Indian Arts & Culture go to: http://santafeselection.com/museums/museum-indian-arts-culture

Thank you for reading my article. Please sign up to receive my monthly posts on the people, culture and history of Santa Fe, by going to the home page and entering your email address in the “subscribe” field. Cheers! ~ Maria.