The Chinese have record of belt buckles beyond utilitarian value from as far back as 2 B.C. Elsewhere, tombs of kings and pharaohs have been unearthed to reveal a cherished buckle or two. It isn’t new that decorative statements of status, prowess and fashion via the buckle have continued to develop style and collectibility through the centuries.

Here, in the relatively young American Southwest, it wasn’t until the mid-1800s, when the Spanish and Mexicans brought their silver folk art in the form of ornamental horse bridles and various other adornments to the Four Corners region, that Native American silverwork began to evolve from its simpler origins.

The skilled, industrious Navajo, Zuni and Hopi artisans soon developed their own distinctive designs and techniques for the beautiful style of the concha or concho (meaning “shell” in Spanish) belts. Decorated with silver shells from tip to tail, and the addition of turquoise and other ethnic accents, these belts heralded a distinguished Southwestern style. 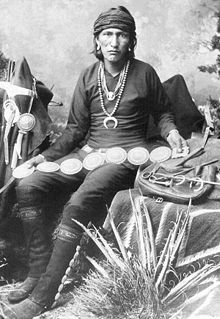 During the Civil War, the military brought symbolic status to the buckle. And later, rodeos would award their champions with an expensive, hefty medallion for their belts.

The concha belt remains as popular now as it ever was. Its timeless appeal and design adaptability works with any fashion trend.

In the1930s, the Texas Ranger utilitarian holster and belt triggered the trend of belt tip-sets. The fashionable ranger tip-sets comprise the belt’s decorated aspects of buckle, one or two holder loops or keepers, and tip. Hollywood Westerns boosted the trend with the likes of John Wayne, Roy Rogers and other cowboys of the silver screen. 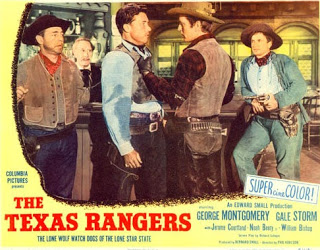 Since the mid-Seventies, Santa Fe has been home to James Reid, whose name is synonymous with the highest quality tip-sets and a variety of jewelry accessories, and whose designs have fans the world over. 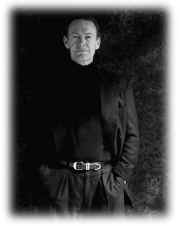 The story of James’ love affair with Southwest silver folk art began in the mid-Sixties – a time of radical change in the trends of society, culture and fashion. Santa Fe was, as it always has been, a hub for many traders from all over the United States. James was one who journeyed from Pagosa Springs, Colorado to Taos and Santa Fe on a regular basis to trade American Indian antiques, and his own creations in leather and silver.

A free spirit on a low budget, and in true hippie style, he drove, worked and slept in a rigged-out school bus, and later a utility van, complete with the addition of a protruding stove-pipe connected to a wood stove that ensured warmth against the chilly northern New Mexico nights. (I begged him for a picture of it, but he swears he no longer has one.) He laughs as he remembers the pine lath work on the interior that, although adding to the “funky” feel, made it a rolling fire hazard.

As he traveled around northern New Mexico, he gathered techniques from silversmiths and artisans. “With a few rudimentary tools, you can learn very quickly by watching and doing,” he says.

James continued his traveling lifestyle until 1974, when fate, destiny, or simple mechanics imposed a change. He set off to return to Colorado when his van/studio/home broke down. That seemingly inconvenient incident led to Santa Fe claiming James as one of its own.

His prolonged stay drew him to become immersed in the serious study of Southwest silverwork. Initially, his designs focused on the belt tip-sets. James saw the potential for extensive creativity in a field that even by the mid-Seventies remained relatively unexplored – and he enjoyed the artistic freedom it afforded. During this time, Southwest silverwork, along with many other Southwest and Native American fashion trends, experienced a renaissance, the popularity of which lasts to this day. James’ tip-set designs took off. 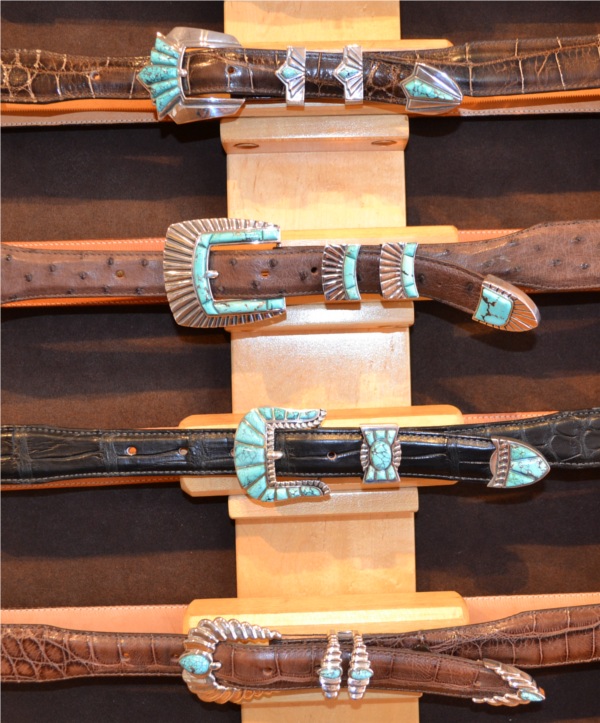 A fun play on the theme are these colorful “wrist belts” of alligator leather with silver conchas. 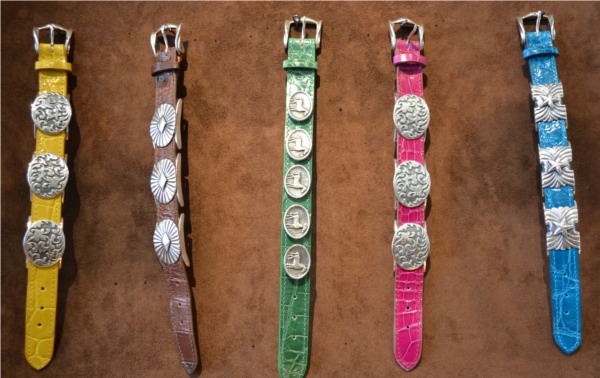 But belts were just the beginning for James. Ever since opening his first shop in 1974, James Reid designs have continued to evolve and include a variety of creative plays on traditional and contemporary themes in all jewelry and accessories for men and women. 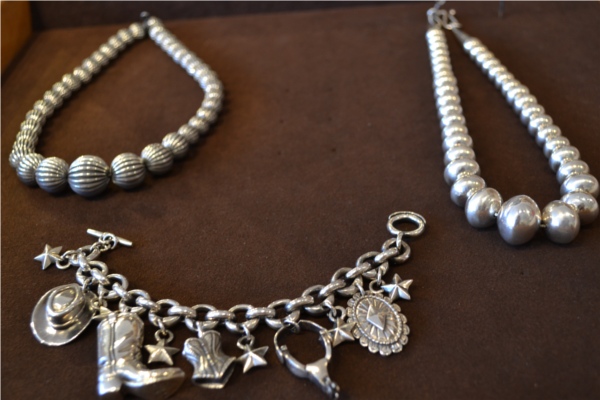 Another popular gem is the “bolo” tie. Since the mid 1800s, Hopi, Zuni, Navajo and Pueblo silversmiths have created artistic clasps to hold two ends of leather string in place with style. But the bolo tie has its own history.

The name “bola” (most often spelled and pronounced “bolo”) originates from the South American word “bola,” meaning “ball”.  A “bola” (also called a “boleadora”) was a weapon and later a herding tool used by South American cowboys. Weights were attached to the split ends of a long rope, which could be thrown, much like a lasso, to ensnare the target by tangling around its legs.

Some sources say that the bolo tie trend was started in the 1940s when Arizona silversmith Victor Cedarstaff was riding his horse one day, and to prevent the wind from blowing his hat with its valuable silver-tipped hatband off, he drew the hatband down around his neck. His riding partner commented on it being a “nice looking tie.” Victor went on to create bolos and even patented the design. The bolo tie was also helped toward popularity by early Hollywood movies and television characters like Hopalong Cassidy, Roy Rogers and the Cisco Kid.  As of 1971, Arizona claimed the bolo tie as its official neckwear.  In 2007, New Mexico and Texas did the same.

It has been more than 38 years since James Reid surrendered to Santa Fe’s charms. In 1981, he opened a gallery on Palace Avenue, just steps from the Plaza, and has been there ever since. 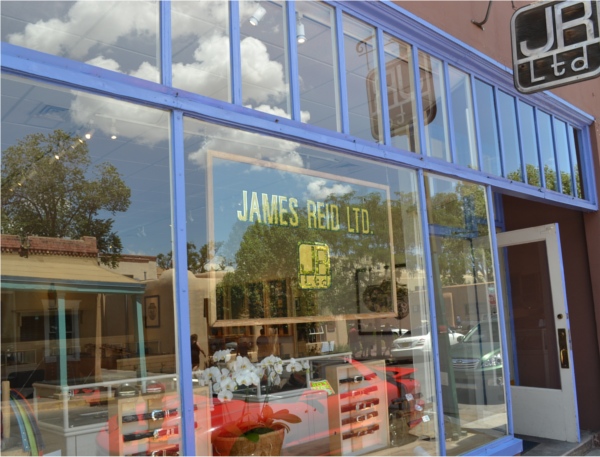 He continues to collaborate with as many as ten local Santa Fe jewelry artists to create refreshing, ornamental styles, and embellish utility with unique beauty.

James Reid designs have established an iconic standard of their own, one of superior quality and a Santa Fe style of timeless sophistication donned by men and women world-wide. And the Southwestern theme remains integral to the inspiration of his modern designs. 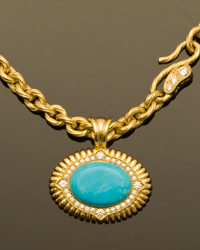 Satin Link Chain, 18kt gold pendant with Sleeping Beauty turquoise and diamonds. Hanger is hinged for detachment, so that chain can be worn alone or with other pendants. 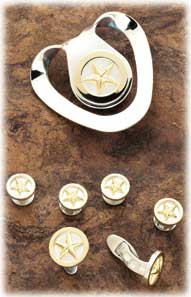 It is fun to visit the gallery to see what new creations they have on display and the creative ways they continue to elaborate on the southwestern designs. Often, James is there and happy to share his extensive knowledge of the work that will help you gain appreciation for wearable art that bridges the Southwestern traditional with the contemporary.

For more information on James Reid Ltd please go to: