Indian Detours were the idea of the legendary Fred Harvey Company, renowned in part for their chain of ‘eating houses’ hosted by Harvey Girls along the Atchison, Topeka & Santa Fe Railroad between 1876 and 1968. In response to economic hardships of the early 1900s, the Harvey Company developed a unique collaboration with the Native American pueblos throughout the Southwest that permanently changed the traveler’s experience. 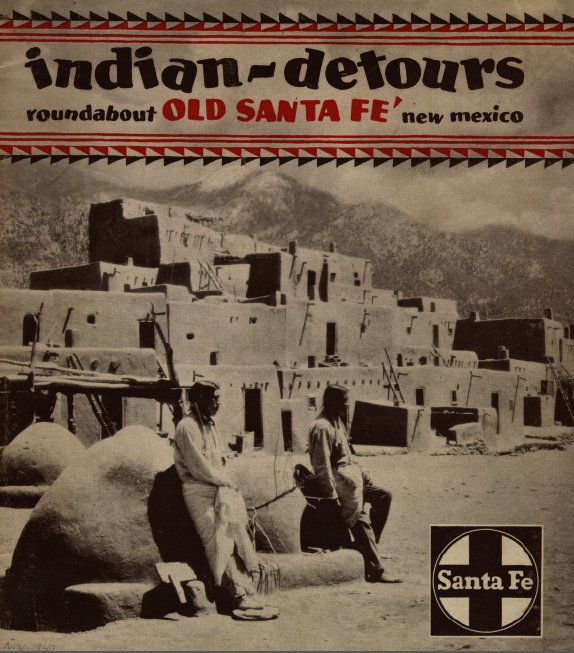 Initially, Harvey’s famous eating houses helped boost rail travel in the late 1800s. His inspiration came from working as a mobile mail clerk on the railroad during the civil war, enduring bad food and service. In 1876, Harvey began his first lunchroom in the AT&SF train depot in Topeka, Kansas. Harvey’s trained staff provided good, wholesome dishes, and polite, professional service to passengers, earning him the name “Civilizer of the West.” 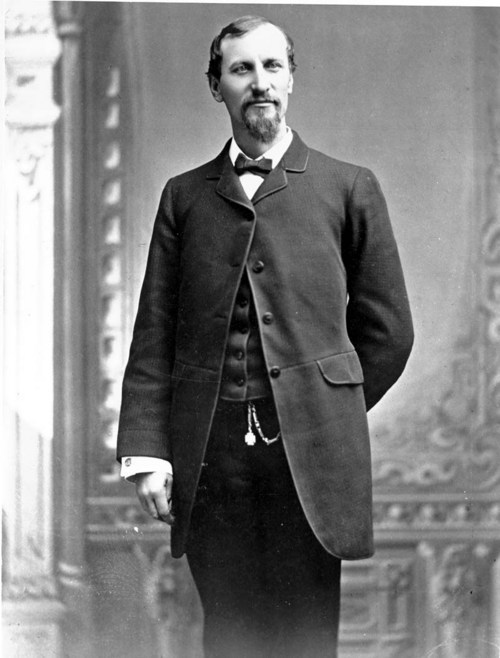 By 1891, the booming business had expanded to 15 Harvey House restaurants. At the time of his death in 1901, the Fred Harvey empire had spread to 12 states, with 45 restaurants and 20 dining cars. Harvey was 65 years old when he died from cancer. His son Ford took over.

In 1902, train travel and Southwest tourism was waning.  To help rejuvenate enthusiasm, the Harvey Company created an “Indian Department”, which commissioned artists, photographers and ethnographers to depict the Southwest’s unique “Indian” lifestyle and culture. Images portraying the “romance and mystique of the Southwest” appeared on brochures, pamphlets, menus and postcards. 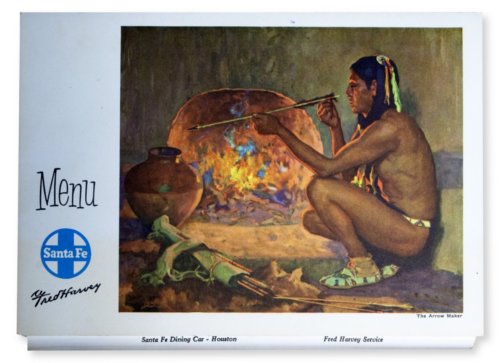 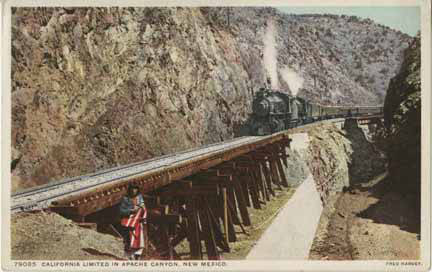 1920 Postcard of The California Ltd in Apache Canyon. Image: Palace of the Governors Photo Archives.

During this time, they built the first Harvey Indian Building and Museum in Albuquerque at the El Alvarado Hotel Harvey House (neither of which exist today). 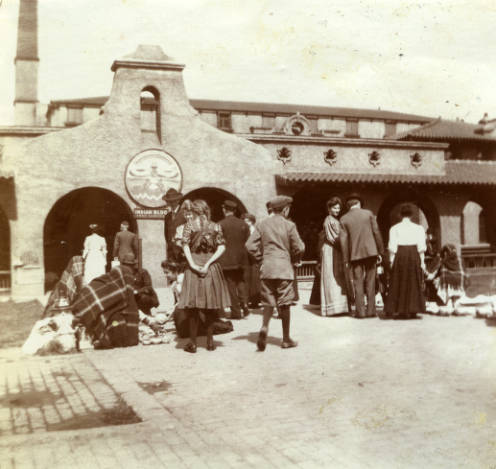 The Indian Building exhibited Native American arts, crafts, cultures and people. During a one-to-two-hour respite, travelers were invited to wander through the extensive displays of art, and “live exhibits” that included Native Americans from many tribes around New Mexico – Navajo, Isleta, San Ildefonso and Santa Clara to name a few. Indians would be in traditional dress and often situated working on arts and crafts that were available for sale, such as pottery, weavings, and beading. 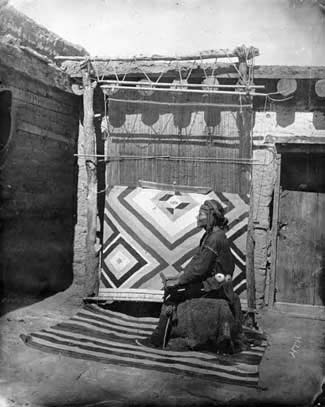 In 1925, up against the slump of business caused by the increasing popularity of automobile, and airplane travel, the Harvey Company began developing the idea of “Indian Detours” at their Southwest hotel locations, from the Grand Canyon to Santa Fe. The specialized tours by car were to divert passengers from the train for 1 to 3 days and drive them through the “wilderness panoramas” of Northern New Mexico to Indian ruin sites, and living pueblos.  Cars were bought, and drivers and couriers were educated by field trips and up to four months of in-depth study on the area. In May, 1926, the Indian Detours officially began.

The fleet of “Harveycars” included Packards, Franklins, Cadillacs and White Motor Co. Buses. They whisked “detourists” or “dudes” (as they became known) away into the heart of the rugged New Mexico terrain in style. Harvey Drivers were always men, wearing a western, cowboy-style outfit. The tricky effects of New Mexico’s steep dirt roads on those big, beautiful cars called for each driver to have at least four years experience as a mechanic. Cars were inspected regularly, cleaned thoroughly after every tour, and replaced every other year.

The success of the Harvey Girls in the dining rooms and hotels across the country inspired the continuation of hiring only women for the role of tour guides or “couriers.” Harvey Couriers were dressed in “Navajo-style” costumes, which included velveteen skirts, concha belts, and squash blossom necklaces. 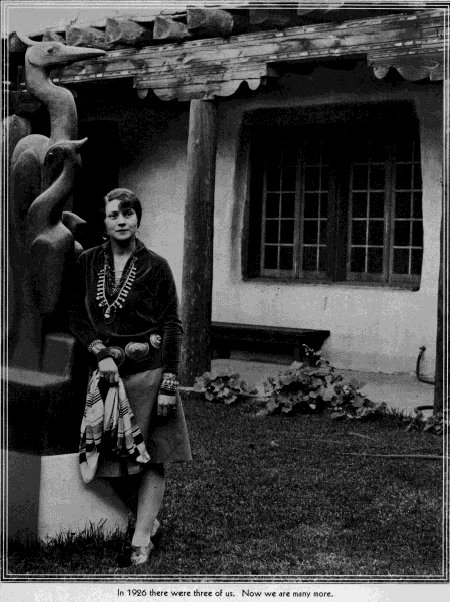 Harveycar Courier. Image from Indian Detour Brochure. Caption says: In 1926, there were three of us. Now we are many more.

Tours included stops at the pueblos such as San Ildefonso, Santa Clara, and Taos. The three-day detour was the “most comprehensive.” Guests were driven from Santa Fe to Frijoles Canyon, Puye Cliffs, Taos and back. They often included a drive through the Spanish land grant villages on the road now known as The Scenic High Road to Taos, with a stop in Truchas. Travelers would “stroll about” the various ruin sites and pueblos and often bought Native art as souvenirs. 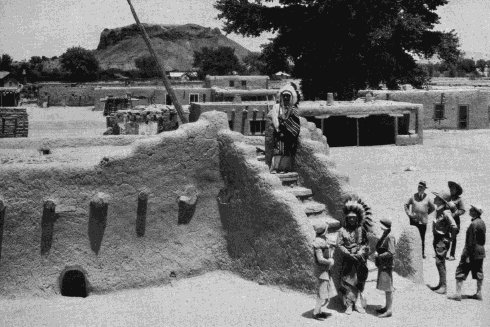 Sometimes there was a partial dance performed in authentic ceremonial dress. The full ceremonies were not then open to outsiders. 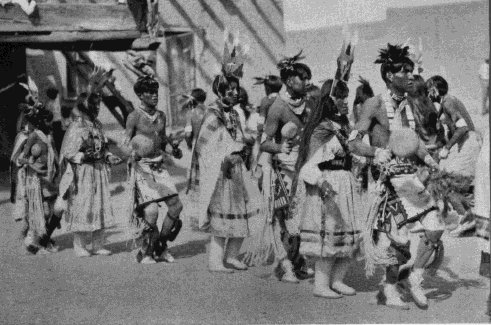 The Harvey Indian Detours were the most successful tours being offered at the time. And telling of the times, the interaction between detourists and pueblo people was limited. The experience was like being a museum patron observing live exhibits, with Harvey brochures and couriers providing detailed information, as seen from the Harvey perspective. A Harvey brochure sets a scene of an ancient culture caught in time as the fancy car zooms by on the way to Puye Cliffs: On the broad highway modernity flashes past horse-back Indians and tiny burros packing firewood to Santa Fe just as they did three centuries ago…Everywhere on the open upland above are evidences of the Forgotten People. 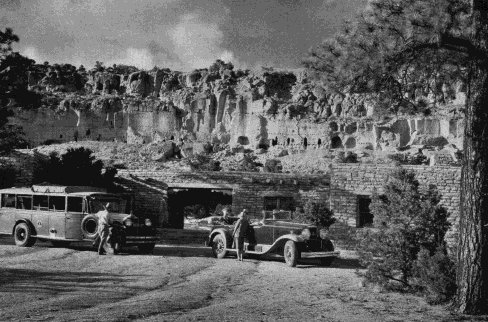 The Great Depression of the 1930s brought fewer and fewer travelers to the area. After WWII, many roads in New Mexico were improved and travelers preferred to drive their own vehicles.

By the late 1930s, Harvey Indian Detours were verging on obsolete, but not without having radically changed tourism in the Southwest. The tours had brought outsider awareness to the distinct, complex societies of the agrarian, pueblo-dwelling Indians of the area. With this awareness came an appreciation for the unique art and traditions that remain a source of income for Native artists, and are valued by travelers, collectors, ethnographers, artists and photographers to this day. 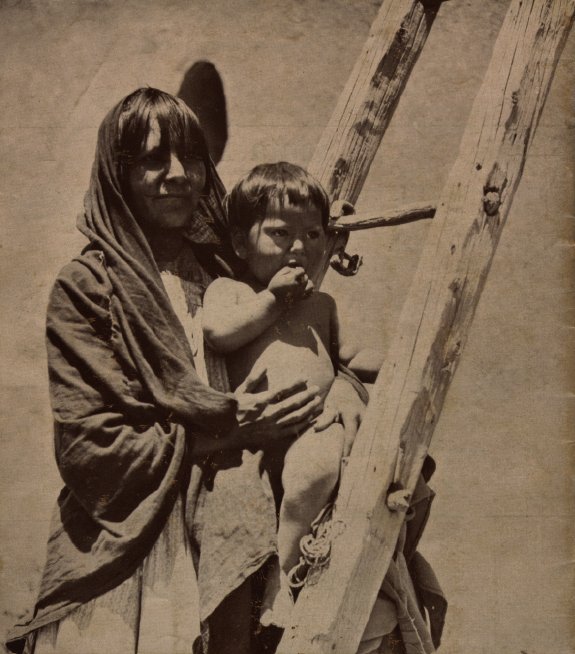 Attempts were made to revive the Indian Detours in the late 1940s, and early 50s, but by then, times were very different and they dwindled. Fred Harvey’s sons and grandsons ran the business until 1968 when it was sold to a hospitality business based in Hawaii.

For more memorabilia and history on the Fred Harvey Company in Santa Fe, visit the New Mexico History Museum’s long term exhibit: Telling New Mexico: Stories from Then and Now.

With nineteen pueblos in New Mexico, eight in the northern territory, there are numerous villages to visit. Today, travelers prefer to gain an insider perspective of other cultures and make more meaningful connections — I know I do. But it can still be difficult, unless you connect with someone they know.

Thanks to Robbie O’Neill’s Cultural Treasures Tours and her personal connections at many northern pueblos, I recently had the pleasure of meeting Andrew Garcia, an important elder at the Ohkay Owingeh Pueblo just north of Santa Fe. He is a Storyteller and educator, teaching of his people’s ancient customs, dances and songs. Since 1974, he has travelled the world with his dance troupe, Tewa Dancers From The North. “We’ve performed in India, Singapore, Columbia, Brazil, Canada, Spain, Mexico and all over the U.S. It’s important to share cultures.” Andy says.  “We performed the Buffalo and Eagle Dances for a quarter of a million people in the Washington Monument Mall at President Bill Clinton’s Inauguration.” 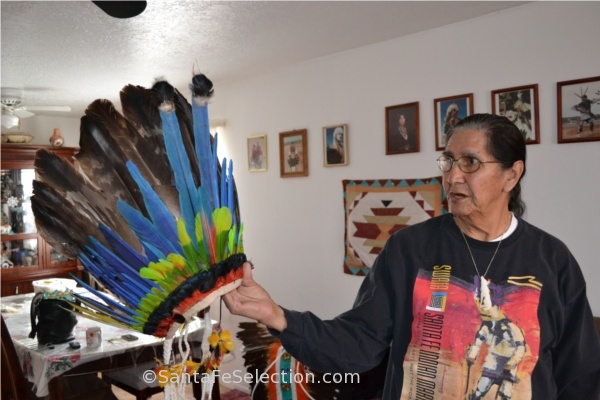 In his pueblo home, Andy showed us some of the ceremonial costumes, many of which he and his family have made. Andy has been pivotal in keeping the knowledge of his pueblo’s ancient dances and songs alive, sharing with other cultures, and ensuring it is passed down through further generations. 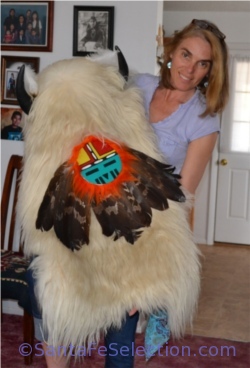 Me with a heavy White Buffalo head dress. Hard to imagine dancing in this all day.

One of the many dances at the Ohkay Owingeh pueblo is the Annual Feast Day on June 24th. They celebrate with the Buffalo and Comanche Dances. An interesting insight I learned from Andy is that the Comanche Dances and songs were created by the Pueblo people, probably around the mid-1800s (when more Comanche were in the area, and raids were a regular occurrence.) “It was a sign of respect for them,” explains Andy. “Not all Comanches were bad. Some were, but some were peaceful. It depended on the tribe. When they went to war or performed ceremonies, their outfits, body paint and regalia were very impressive. The Comanche Dance is a way to show admiration for their culture’.” 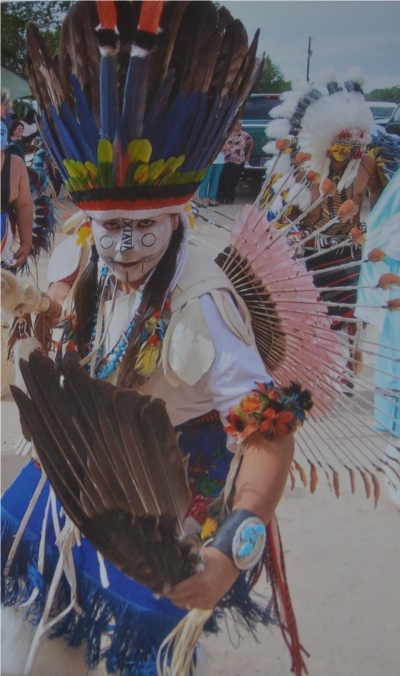 Taken from a photo of one of Andy’s grandsons in Comanche regalia.

Part of the Cultural Treasures tour included a home-cooked lunch at another friend’s home, this time at the San Ildefonso Pueblo. The traditional meal included beans, squash and Indian Tea made from plants picked from the land. To learn more about Cultural Treasures Tours, go to: http://santafeselection.com/tours/cultural-treasures  You can also call (505) 231-0855, or email: Robbie@santafeculturaltreasures.com.

Throughout the year, many pueblos are open to visitors, except on certain holidays. There are Ceremonials and Feast Days that visitors are welcome to watch, but not always allowed to photograph (see here for a complete calendar). The Ohkay Owingeh Pueblo does welcome visitors to photograph and video most of their dances, once you’ve paid a nominal fee for a permit. (See below for June 24th Annual Feast Day Info.)

Researching this article, I saw so many images of the area’s ruins and sites taken in the 1920s. It was comforting to see that many places have changed little since then. One of the great things about New Mexico is that there are still many areas that feel untouched by “modernity” today. Being an incurable romantic with a nostalgia for the “good ol’ days,” I’m in the right place.

Among their many custom tour options, Sue and Georges of Santa Fe Walkabouts offer fun trips to Puye Cliffs, Frijoles Canyon, Bandelier, and Taos Pueblo.  They also have a terrific Pinzgauer off-road vehicle that makes light work of any rugged terrain and is a lot of fun. Call (505) 231-9161) or email: Sue@santafewalkabouts.com.

Outspire Hiking and Snowshoeing includes tours to Bandelier National Monument, Frijoles Canyon, and many other wonderful known and little-known ruins and wild nature spots around northern New Mexico. They are also well versed in the area’s geology and flora and fauna. Call Karen Denison at (505)660-0394, or email: GoHiking@outspire.com

June 24th Ohkay Owingeh Annual Feast Day : The dancers will perform in the Pueblo’s plaza from around 10.30 a.m till around 5.30 or 6 p.m. It’s free to the public. There’s only a nominal fee, usually around $10 – $20 if you want to photograph or video. You can find an official, who’ll be in the pueblo’s plaza area, and ask them for a permit. (Click here for map to San Juan/Ohkay Owingeh Pueblo north of Santa Fe approximately 25 miles.)

Thank you for reading my blog. Please sign up to receive my monthly articles via email by going to Subscribe. Thanks, Maria.

7 thoughts on “Indian Detours Then and Now”