Every year since 1997, during the last two weekends of September, local folks know it’s time to head along the High Road for the annual High Road Arts Tour. 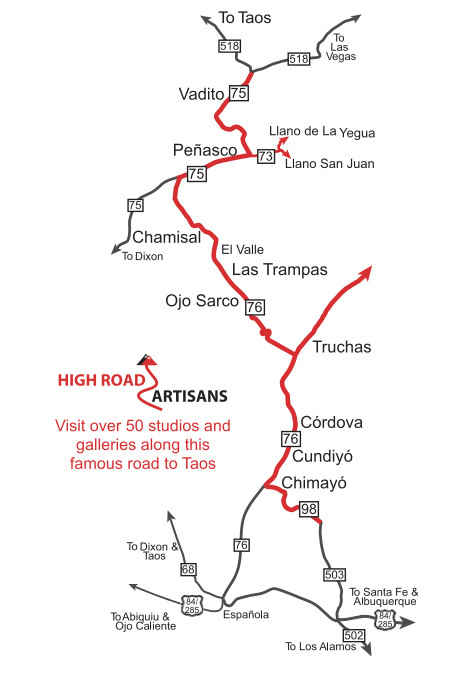 Northern New Mexico’s historic, tiny land grant villages along the Scenic High Road to Taos are vibrant with the colors of fall, and beautiful art from over 50 artists and artisans. Studios and galleries open their doors to greet visitors from near and far. Some of the galleries are open year-round, but the annual tour offers the chance to buy directly and meet all the participating artists, see inside their studios, and gain insight into how they approach their creative process.

I thought I’d take this opportunity to briefly introduce you to a sampling of the tour’s artists to whet your appetite for a wide variety of art, crafts, and colorful characters that make up this popular fall tradition. 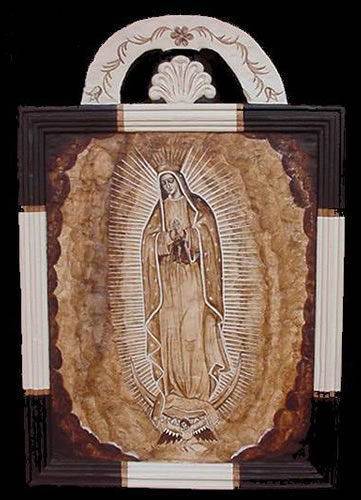 Meet Dr. Rey Móntez in the Móntez Gallery in the lovely old adobe church, La Capilla, in the village of Truchas. A native of Chimayó, Rey’s artistic influences stem mostly from his childhood. His parents were both artists; his father a “santero” (maker of Christian saints), his mother a weaver of the Chimayo tradition. The two churches he attended as a boy, Santuario Chimayó and Santuario de Guadalupe, remain a strong theme in his work today,  . Rey began painting at the age of nine.  The path of his life shows how his love for the arts is most important to him. He has worked to support education on and the preservation of Spanish Colonial Arts, won awards, co-authored and authored books and articles on the traditional arts. He is also featured in the Museum of New Mexico’s 2012 documentary “Living Traditions: Folk Art of New Mexico.”  And that’s just the beginning. Rey is an important part of the local arts community both as an artist and supporter, and a fun guy to chat with when you meet him in his gallery. (575) 689-1082. 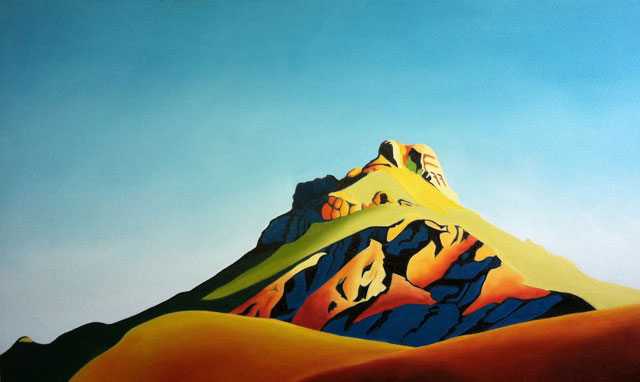 Trish Booth was born in Oregon and raised in Montana on her father’s family homestead. Her ancestors were among the first to journey over the Oregon Trail. Her connection to the land and the spirit of its ancestors are part of what inspires her work. “There have always been metaphysical underpinnings in my works,” Trish says. Her work involves sketches and photographs on location and using oils in the studio to create the final desired result. Her works can take weeks and sometimes months to complete and has been described as “hyper-real and surreal at the same time,” and also “more suggestive than literal.” She earned her B.F.A. from the San Francisco Art Institute.

Trish’s work has been featured in numerous art publications. She has exhibited in museums, universities, galleries and shows across the United States. Currently she exhibits at the Hollywood Cinema Arts Gallery, Hollywood, California, La Posada de Santa Fe Resort and Spa in Santa Fe and her own Ghost Pony Gallery in Truchas, New Mexico. (505) 689-1704. 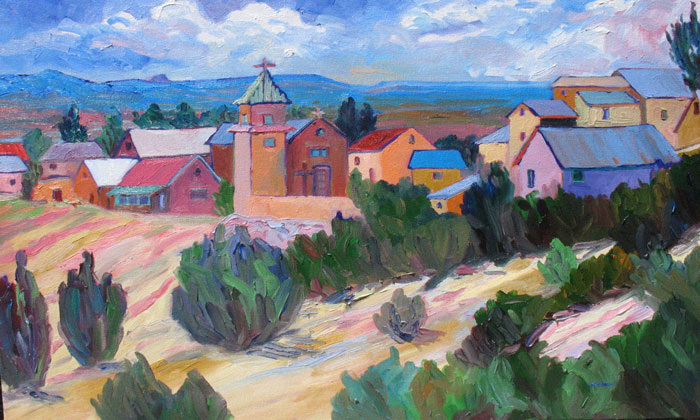 Sally hails from Minkler, California. She is well-known for her works in oil and watercolor. She started on the artist path early in life. At the age of 5, she pedaled by tricycle to sketch in her rural neighborhood; she was already bitten by the “plein air” bug – so to speak.  She has completed a B.A. and M.A. at Fresno State University; she studied for a year in Florence, Italy, and has taught in Australia. Her work includes watercolors and oils and among her many accomplishments and awards, Sally has exhibited in museums and galleries across the country. She is also featured in multiple art and culture publications. The lure of New Mexico runs deep for Sally, she says: “After many years of seeking new horizons, the mountain villages of northern New Mexico have become home.”  Her studio is also in Truchas. (505) 689-2636. 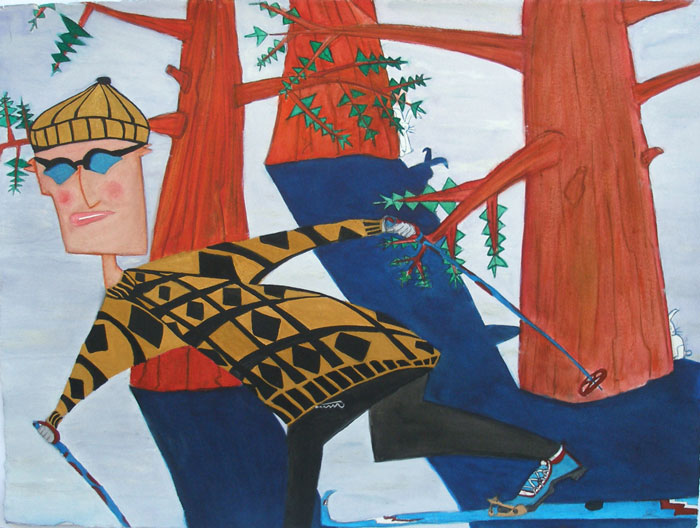 From a very early age, drawing and painting for eRic were his “dearest friends”. “Sur-Folk” is his trademarked style – his unique play with color and image that is “a collision between surrealism and folk-art.” Both in technique and result, his works express vibrancy and “soul,” along with humor and the unconventional. An outside wall of his Truchas studio displays the fun colors and images that invite visitors in. He says of his work that it is a culmination of a life of unfettered spirit, and a tribute to overcoming personal hardships. (505) 660-7409. 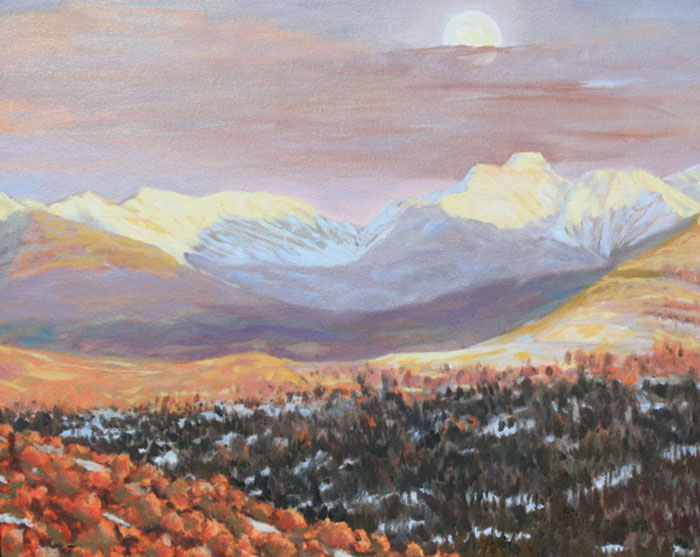 Originally from south Texas, Charlee began drawing at the age of five. She soon discovered pastels and by age eight she was already delving in oils. She earned her B.F.A. from the University of Texas, where she majored in sculpture, and went on to a career in architectural illustration. She notes that painting in oils as a child was a calling that has never left her. The northern New Mexico light and vistas have influenced her work greatly, she says. “The light in the northern Sangre de Cristo Mountains cinched the directions of my paintings.  Some artist said that light is all that is worth painting.” In her studio in Ojo Sarco, Charlee devotes all her time to painting. “Both oils and pastels have the rich ability for catching the light and shadows for all to see. It’s just up to the artist the use it.” (505) 689-2372. 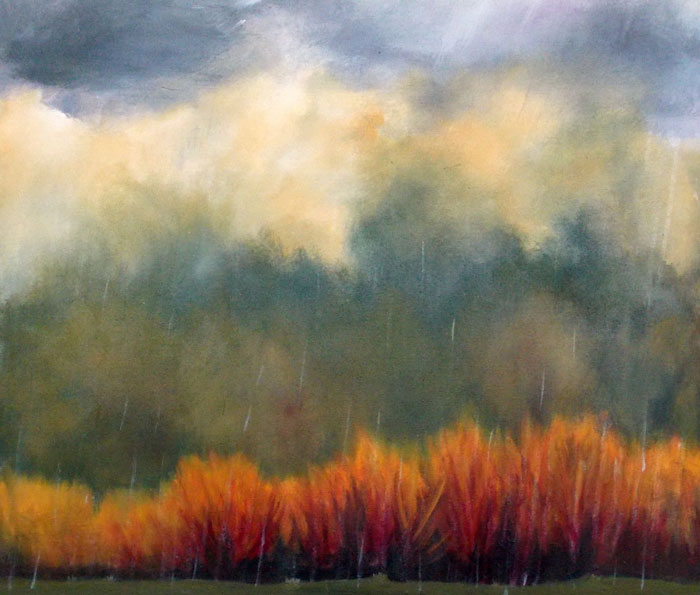 Donna began her art career later in her life’s path. She grew up in New Jersey and Pennsylvania, and although she studied art as part of her B.A., she considers herself mostly “self trained.” She was Artist-in-Residence for the state of Washington in the late ’80s, and also taught watercolor classes in the state prison. She says, “I gained the dubious recognition of being the first woman to teach a painting class in the maximum security unit of the Washington State Pen.”

Donna lived in Seattle for thirteen years, and she credits the development of her unique creative style to that period. She works in watercolor, acrylic, monoprinting, and solar etching. In 2007, she won a painting Fellowship at the Wurlitzer Foundation in Taos, which brought her to her “true heart home” in New Mexico. She lives in the tiny land grant village of Chamisal and is inspired daily by the “light and sky that sets me free.” 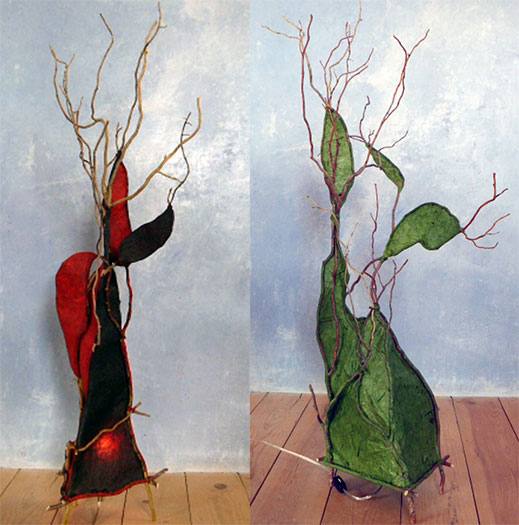 Clôdie François, a French native, is a self-taught artist who loves to create lamps and furnishings of whimsy from willow branches, cardboard (carton in French), recycled wood, and other materials. Of her work she says, “In these landscapes of primal chaos, we are compelled to experience the fleeting fragility of our existence, and the feeling of being only passers-by. The very material of cardboard favors creations that can express the lightness of being, and the imagination and flexibility necessary for life in such an environment, where extremes marry… And it’s also a form of mockery of obsessive consumerism.” 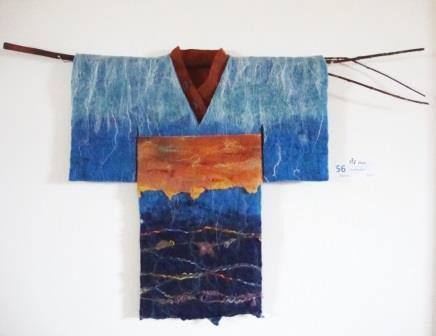 Lise Poulsen was born in England, also into a family of artists, those of the needlework tradition. Knitting, sewing, embroidery and tatting (lace-making) were her family’s forms of creative expression. Although she tried to deny its influence at first, she eventually succumbed to her innate love of fabrics and fibers in the late ’80s. Initially, she juggled a career in software with her developing love and obvious talent for the fiber arts. Lise and her husband Nick Beason took an early retirement and moved to Peñasco, a place she considers “the most beautiful part of the Southwest.” Lise and Nick run Gaucho Blue Fine Art Gallery in Peñasco.  She loves being able to explore new and innovative directions in the contemporary felting arts, teaching and offering workshops. (575) 587-1076. 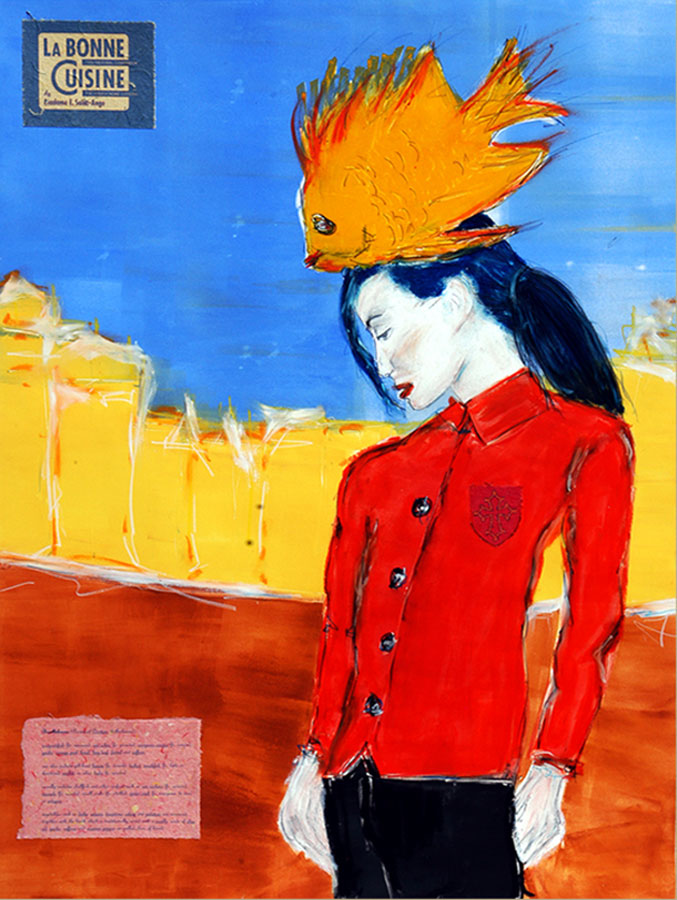 Also an English native, Nick Beason’s love for print making began in his youth, in London, where he enjoyed “hanging out” at a gallery in Chelsea and became highly influenced by it. He studied etching and drawing at Winchester Art College. His path brought him to New Mexico in 1990 by way of the Bay Area and the Pacific Arts League of Palo Alto, where influences drew him to monotype printmaking. Nick says, “Monotype printmaking is the most painterly method of printmaking techniques, producing a one-of-a kind print.. truly a combination of printmaking, painting, and drawing media.” He loves the “spontaneity of the medium, the quality of light created,” and the ultimate result, “a surface that is unlike any other art.” NIck and Lise run Gaucho Blue Fine Art Gallery together in Peñasco. (575) 587-1076.

Remember, The High Road Arts Tour is always the last two weekends in September. This year it’s the 19th, 20th and 26th, 27th September, 2015. You can find a High Road Tour Map that plots all the studios by number at this link: http://highroadnewmexico.com/map

For more information on these and many more High Road artists, studios and galleries in the villages along the Scenic High Road, go to: http://santafeselection.com/day-trips-activities/high-road-artisans  and http://highroadnewmexico.com/

Thank you for reading my blog article. If you’d like to receive my posts via email, please send your request to Maria@santafeselection.com.

3 thoughts on “Artists of The High Road Arts Tour”