On February 15, 2013, the Georgia O’Keeffe Museum launched the Annie Leibovitz exhibit, Pilgrimage (organized by the Smithsonian Art Museum). I was lucky enough to be able to attend a preview of the exhibit the day before it opened. We were led through the rooms of beautiful images and given some insights into the ideas and personal commentary behind the artist’s choices that comprise the collection. Jerry, the docent who led us, did a great job of conveying the information that he had been given only hours previously by the artist herself.

About her inspiration and motivation for the project, Leibovitz says, “From the beginning, when I was watching my children stand mesmerized over Niagara Falls, this project was an exercise in renewal. It taught me to see again.”

Leibovitz’s travels for the project included two visits to New Mexico to photograph various aspects of O’Keeffe’s legacy; her home, Ghost Ranch’s landscapes, and other treasures held in the Museum vault.

What I felt from seeing the exhibit, is that after 40 years of photography assignments, Leibovitz took the opportunity to explore her own interior and exterior worlds without the concerns of pleasing a client. She just pleased herself.  The compositions I saw are potent because the subjects hold their own as iconic figures in world history, art, culture, and not least the changing roles of women in society. And they stand as metaphorical representations of some of the most unique, influential people, events, places and stories that have shaped our current experience of the world. One example, is an image of a playing card that the legendary sharp-shooting Annie Oakley had shot through the tiny printed heart from a distance of ninety feet! 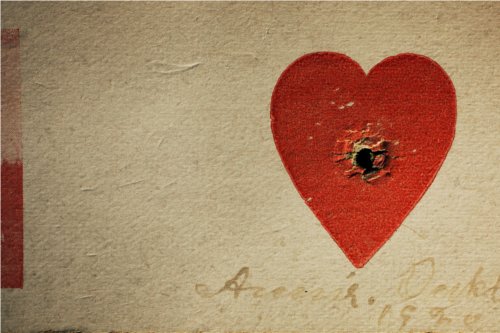 There’s a strength to the subjects Leibovitz chose to shoot that echoes the strength of O’Keeffe’s beloved subjects. The current exhibits, O’Keeffe and the Faraway: Nature and Image, and Leibovitz’s Pilgrimage compliment each other beautifully.  I would recommend everyone take this opportunity to visit the O’Keeffe Museum before May 5, 2013 to see these two icons under one roof…

I have a little side story here: In 1986, I was living in New York City and working as a fashion model. I think back to the day I worked for Bergdorf Goodman, modeling Donna Karan fashion. It was a very easy assignment for me. I spent most of the day lying on a bed, wearing the latest Donna Karan fashion; my hair, makeup, and clothing all being fussed over and arranged.  The photographer snapped roll after roll of film (yes, it was that long ago) from atop a very tall ladder. And when the ad came out in the New York Times on February 2nd, 1986, I was thrilled. I sent the newspaper page to my parents back in England. It wasn’t until they passed away that I found out they’d kept a suitcase full of photos and magazine tear sheets from my modeling days. I sorted through them, threw many away, kept a few, and then promptly forgot about them. The night before I went to this exhibit, I looked to see if by chance I had had the good sense to keep this one image. It was the only time during my fashion career that I was given the privilege of working with Annie Leibovitz. 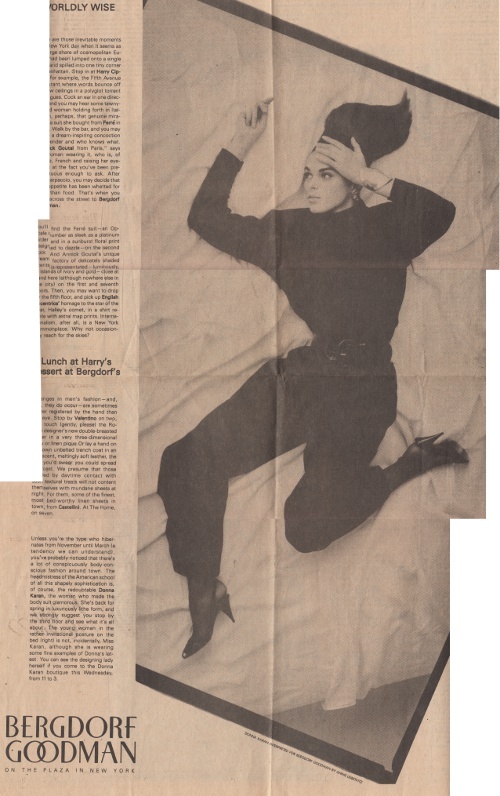 Now I look at that young girl in the photo and feel an almost parental pride toward her. We had to do some wizardry to get the massive, now sepia toned page to scan, and the folds add character, but it is, nonetheless, my one degree of connection to a great artist.

To learn more about the O’Keeffe Museum exhibits go to: http://www.santafeselection.com/museums/georgia-okeeffe-museum